Nukewatch brings critical attention to the locations, movements, dangers, and the politics of nuclear weapons and radioactive wastes. Join our staff and volunteers in raising awareness and taking nonviolent action to address the nuclear dangers that threaten current and future generations. Get Nuclear Heartland: A guide to the 450 land-based missiles of the United States

Nukewatch’s book chronicles the history of U.S. land-based nuclear weapons as well as the decades of efforts by peace activists toward their removal. The book is a revised edition of the original Nuclear Heartland, published by Nukewatch in 1988 when the land-based nuclear arsenal numbered 1,000. The updated version reminds readers that 27 years after the end of the Cold War, the intercontinental ballistic missile (ICBM) system, now at less than half its former size, remains on alert throughout the Plains states with its underground missiles ready to launch—even though land-based missiles have been declared useless, dangerous and ripe for elimination by activists as well as high-ranking military and political officials. Learn more and take action.

US Bombs Out of Germany 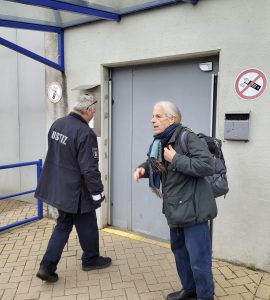 Nukewatch’s John LaForge is currently serving 50 days in a German prison for his part in actions aimed at removing US nuclear weapons from Germany. Before entering prison he was joined by other activists that have endured jail time for their anti-nuclear protests in a zoom meeting. Watch it here: John’s Jail Send-Off Zoom Meeting
Nukewatch Talks - an Exclusive

For more information about the campaign, click on US Bombs Out of Germany.

Stay up-to-date on the news about nuclear dangers and anti-nuclear activism that is not reported by the mainstream media. We publish the Quarterly in March, June, September, and December. View the latest edition, access our archives, or contact us to receive a hard copy subscription in the mail four times per year.