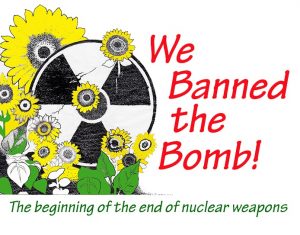 Invitation to get involved!

TO CELEBRATE THE TREATY ON THE PROHIBITION OF NUCLEAR WEAPONS

Yes, celebrate—but be smart about it. Any celebration should include an action item that raises the profile of the Treaty in the US.

The first goal is to make people aware of the Treaty. Goal #2 is to make sure they know that it is entering into force. And Goal #3 is to begin to use public awareness to pressure the government to recognize, sign, ratify and comply with the Treaty. If that sounds like a lot it is, and it will take time. But it will never happen if we don’t make it happen.

Here are some options. Some you can do all by yourself, others work better with a small group (please take pandemic precautions!). Pick one or more of your favorites.

And please, report back! This is crucial—even if your action is a simple one. We gain strength from working together and knowing that people all over are taking action. And your effort, large or small, is amplified when it is shared. We hope to build a database of actions and we hope to demonstrate widespread support for the Treaty across the country, so let us know what you have planned by emailing nuclearbantreatyEiF@gmx.com. You can also post your actions on Facebook at the Nuclear Ban Treaty EIF group; we will publicize other sites as they become available.

1. Everyone can learn about the Treaty, and you don’t have to wait until Jan 22. See this Fact Sheet or a quick google search will turn up resources. Some as brief as 90 seconds; others are deep-dive webinars.

2. Hang or hold a banner in a public space. Activists will be hanging banners at nuclear weapons sites and nuclear military bases across the country. We have a template that you can use to have a banner made (around $50 if you go on-line) that you can hang or hold at any federal building—your local post office, federal courthouse, congressperson’s office.

2b. Think a banner is a bit much? Here is a template for a poster size version of the Treaty that you can hold or deliver or post in the place of your choice.

3. Focus on the $$$. Our friends in Europe have been successful in pushing investment funds and corporations to divest from nuclear weapons funding—the Treaty gives us even more leverage. You can find a list of the companies and banks that invest in nuclear weapons at Don’t Bank on the Bomb. You can hold a poster outside the local Bank of America or Wells Fargo branch office. If your credit card is issued by a nuke-bank, you can change cards or write to the issuer and ask them to get out of the illegal nuclear weapons business.

4. Check out your local university or college. There is a list here of US educational institutions that are directly involved in supporting nuclear weapons production. Some of them even operate nuclear weapons sites! Your local school not on the list? With a little digging, you might find out where their endowment funds are invested—chances are there is a link to a nuclear weapons corporation or fund.

5. Write your congresspersons—Senators and Reps. Tell them you expect their name to be on the first bill introduced in the new Congress that addresses the Treaty on the Prohibition of Nuclear Weapons. Tell them you’ll be watching. It is highly likely that Senator Ed Markey and Congressman Ted Lieu will introduce bills that include a call for the US to join the Treaty.

6. Write a letter to the editor. This is really important—it is a way to broaden your reach through the public media. Mention your congressional representatives by name so their staff will clip the letter and show it to their boss.

8. Donate! You can write a check or give on-line. There are dozens of groups around the country that are dedicating themselves to long-haul work to make the promise of the Treaty a reality around the world and in the US. They rely on donations and public support to keep going. Even a small contribution counts.

9. Commit for the long haul. Find the group nearest and dearest to your heart and join so you can stay involved, track the progress of the Treaty, and learn about more things you can do to help make it a reality. Get on their mailing list, either on-line or on paper.

10. Ask your local place of worship to ring its bell for peace on January 22.

11. Ask your local government to join the ICAN Cities appeal—present a copy of the Treaty and ask for a resolution calling on the US to join the Treaty.

12. Deliver copies of the treaty in person or send via mail (link to printable format) to congressional representatives and other public officials, nuclear sites and military bases, and business, financial and educational institutions with ties to nuclear weapons activities, with a warning of their complicity.

13. Watch for more ideas: You are encouraged to post your plans on the Nuclear Ban Treaty EIF facebook group, and to look at what others are planning to do.

Submit your comments on the Draft Environmental Impact Statement regarding the Churchrock spill cleanup online by December 28, 2020 here  or during an NRC Public Meeting webinar on Dec. 2 or Dec. 9. Read our Winter 2020 update here by Leona Morgan.

What is it about? We want to develop ways to collaborate globally to advance the Treaty on the Prohibition of Nuclear Weapons and achieve nuclear abolition. We will have strategy sessions, panel presentations, music, and opportunities for networking, training, protest, action, and cake.

Who is it for? You—if you want to be part of a coherent, effective movement, blending multiple strategies, to get rid of nuclear weapons. We’re planning sessions on resistance, divestment campaigns, legal challenges, local organizing, political action. We are stronger when we understand and collaborate with each other.

Where is it? Maryville College, Maryville, TN, is 20 miles from the Y-12 Nuclear Weapons Complex in Oak Ridge, TN, where US thermonuclear weapons components are made. How do I get more information? We are in the early planning stages. For more information check: nukewatchinfo. org/stop_new_nuclear_arms_race for more information.

Why now? It’s two minutes to midnight—the nuclear threat is real and urgent. 2020 also marks 75 years since Hiroshima, Nagasaki and Trinity. And 40 years of the Nuclear Resister, Nukewatch, and the Plowshares movement.

4th US Peace Delegation to Germany

Please join the German campaign to send the existing U.S. nuclear weapons back home, and to halt production of the new B61-12 nuclear bomb, scheduled to be built in the U.S. by 2020 and deployed in five European countries―Italy, Belgium, Holland, Turkey, and Germany.

We invite anti-nuclear, environmental peace and human rights activists to the Nukewatch delegation July 8 to 16, 2019, at the main gate of the Büchel Air Base in Germany with emphasis on young people! The international Action Camp is part of our 20 weeks of action from March 26th to August 9th (Nagasaki memorial day). Twenty weeks represent the 20 B61 H-bombs still at Büchel AB. Our peace camp includes networking, vigils, and nonviolent civil resistance.

For more info. about joining the Nukewatch delegation, email us. For more information about the Peace Camp, visit the websites buechel-atombombenfrei.de and atomwaffenfrei.de (click on International & English, or the Translate icon on your browser), where you can consider joining the delegation, and endorse the campaign by signing the Declaration of Solidarity.

Get Your Money Out of There!

For help divesting from nuclear and other WMD

Don’t Bank on the Bomb is a project of PAX that produces detailed, international annual reports on major weapons producers and their investors.

Costs of War Project facilitates debate about the costs of US wars in Iraq and Afghanistan, Pakistan and Syria.

National Priorities Project is a research organization that examines how much of our taxes go to wars and militarism.

On April 4, 2019, the North Atlantic Treaty Organization will celebrate its 70th anniversary in Washington, D.C. In view of NATO’s post-Cold War crime spree in Yugoslavia, Kosovo, Afghanistan, Iraq and Libya, peace activists are organizing. Nukewatch will be there to present Ousting U.S. H-bombs from Europe.

See more “Unwelcome” events between March 30 and April 4. For info on scheduled events in D.C., see:

Nuclear abolitionists in Germany will again sponsor 20 weeks of nonviolent resistance at Büchel Air Base, from March 26 to August 9, 2018. The campaign demands that the 20 US B61 H-bombs at Büchel be sent home permanently—not replaced with new bombs as the US intends—and that Germany ratify the new nuclear weapons ban treaty. A delegation from the US coordinated by Nukewatch will join the Büchel peace camp July 10-18. For more info., visit the websites buechel-atombombenfrei.de and atomwaffenfrei.de (click on International & English), where you can consider joining the delegation, and endorse the campaign by signing the Declaration of Solidarity.

To support a scholarship fund for the delegation, please send a donation to Nukewatch today—online or by mailing to Nukewatch, 740A Round Lake Road, Luck, Wisconsin 54853.