The timing of the joint statement also marked the decision to establish a zone free of nuclear weapons and other weapons of mass destruction in the Middle East.

Egypt’s representative to the UN, Mohamed Edrees said that the statement includes clear and strong guidelines on the necessity for nuclear weapons states to comply with the NPT’s obligations. The statement pointed out that the coronavirus pandemic has clearly revealed many countries are investing resources on nuclear arsenals and their modernization, at the expense of economic or healthcare development.

“There should be international cooperation to counter such international cross-border crises, rather than spending on activities that pose an existential threat to humanity,” the statement added. – JL 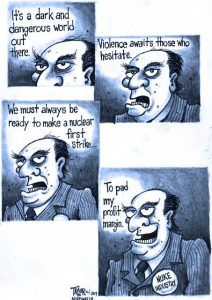 Americans like a good comeback story, but the recent revitalization of the nuclear arms race is not one to be cheered. President Trump plans to charge the US taxpayer nearly $100,000-a-minute to expand the nation’s nuclear weapons capabilities.

Other nuclear-armed countries are doing the same.

A new generation of nuclear weapons requires a new generation of workers to develop and maintain these weapons of mass destruction. The National Nuclear Security Administration reported to Congress that 40 percent of its workforce will be eligible to retire in the next five years.

The US government and its contractors have turned to the nation’s universities to provide this human capital. A new report documents formal ties between nearly 50 college campuses and the nuclear weapons complex.

The extent to which universities have joined this endeavor is surprising. Supporting weapons of mass destruction does not show up in any university mission statements. In fact, it’s often the opposite: universities like to talk about bringing the benefits of knowledge to a global community.

The dangers posed by nuclear weapons are clear. Yet universities still choose to support them.

Students and faculty now face a choice. They can become the next generation of weapons scientists. Or they can refuse to be complicit in this scheme, denying research partnerships or internships at nuclear weapons labs.

Nuclear weapons are weapons of mass destruction, just like chemical and biological weapons. They carry devastating humanitarian and environmental consequences that do not stop at national borders.

One Centers for Disease Control and Prevention study estimated that radioactive fallout from nuclear tests would kill an additional 11,000 Americans due to an increase in fatal cancers. The United States has paid more than $2.3 billion in compensation to individuals affected by nuclear test fallout. Those most affected by tests around the world have been the already marginalized: indigenous and colonized peoples, women and children.

Some see value in the nuclear weapons complex because it supplies thousands of jobs. These boosters fail to acknowledge the studies that demonstrate how defense spending produces fewer jobs per dollar than investment in other areas, like education, health care or infrastructure. The business of nuclear weapons does not provide jobs; it takes them away.

Our choice today is between a future without nuclear weapons or no future at all. Seventy-nine nations (and counting) have signed the 2017 United Nations Treaty on the Prohibition of Nuclear Weapons; American states and cities are voting to urge the US to join them. Universities that support nuclear weapons make the wrong choice and their communities should refuse to be complicit.

Students, faculty, alumni, and community members—who often fund these schools through their tax dollars—can also take concrete action to help their universities join the right side of history.

University communities and administrations together can lobby the federal government to flip its funding priorities, so that nonproliferation and disarmament verification research receive more funding than weapons activities.

A society can—and should—actively debate the extent to which universities are to serve explicitly national interests. But there should be no debate when it comes to supporting weapons of mass destruction. American academia must stop enabling mass murder.

—Beatrice Fihn is the Executive Director of the International Campaign to Abolish Nuclear Weapons, the 2017 Nobel Peace Prize-winners, and wrote this piece for Newsweek, Nov. 13, 2019.

President Trump announced Aug. 29, the establishment of a “Space Command” and named its first commander, Air Force Gen. Jay Raymond. Trump called it “the 11th combatant command” within the US military and said, “Space Com’ will boldly deter aggression.” The further militarization of NASA “will ensure that America’s dominance in space is never questioned and never threatened…”  The President claimed that Space Command  “will soon be followed by the establishment of the US Space Force as the 6th branch of the US Armed Forces.” But Congress has not yet approved a Space Force, and some have suggested that the program should be a section of the Department of the Air Force. Former Secretary of Defense James Mattis saw plans for a Space Force “as potentially redundant” and a waste of tax dollars, PBS News Hour reported. Trump’s choice of Gen. Raymond as the program’s chief proves this point. Raymond is currently the head of the Air Force Space Command, not to be confused with US Space Force or US Space Command. —Vanity Fair, Aug. 30; Washington Post, Aug. 29, 2019

All the B61 bombs now in the United States and Europe are scheduled to be replaced by the “mod-12.” The website airforcetechnology.com says, “The B61-12 air-launched tactical bomb will carry a low-yield nuclear warhead….” [emphasis added] With 50 kilotons of explosive blast (50,000 tons of TNT), the B61-12 has over three times the force of the Hiroshima bomb that killed 140,000 people. Only a military mentality reminiscent of Dr. Strangelove can imagine over 420,000 dead as a “low yield.”

A total of about 3,155 B61s have been produced (as of 2012), beginning with mod-0. Approximately 540 are still deployed, 415 are in “inactive” status, and 520 are set for dismantlement, according to the Bulletin of the Atomic Scientists.

The B61-11 was reportedly built to destroy underground targets, and the Pentagon has asserted that it can detonate at depths of “several hundred feet.”

The Pentagon intends to replace all the B61s now deployed in five European NATO countries. The B61-3s and B61-4s are to be replaced with the new B61-12. About 400 of the new bombs were scheduled to enter full production in 2020 and be deployed after 2023, but the $10 billion program has been delayed because of the delivery of faulty commercial electronic parts.

Asked in May 2019 if the B61-12 will be ready in 2023 as planned, National Nuclear Security Administration head Lisa Gordon-Hagerty said, “That should be beyond 2025,” she said, noting that “an issue” had arisen, without elaborating. Energy officials later said the delay to the B61-12 could last 18 months, Congressional Quarterly News reported.

At present, Turkish, Dutch, Italian and possibly Belgian air forces are planning to buy some F-35 fighter jets from the United States, and the F-35s could begin replacing existing NATO warplanes in 2024. Germany is expected to extend the use of its Tornado fighter jets through the 2020s. German Tornado fighter jet pilots at Büchel Air Base practice in the use of the US B61s to initiate nuclear war.

In July 2018, after a group of International Week protesters occupied the air base runway, the chief pilot from the base made a personal visit to the peace camp to complain. The chief pilot said to Susan Crane of the US delegation that the protesters had “endangered themselves and the pilots.”

Crane replied that the “pilots endanger the whole world by planning and preparing for war with US nuclear weapons.” The chief then said, “There were no nuclear weapons on those jets today.” -JL

The Trump administration has halted, without explanation, the routine practice of reporting the current number of nuclear weapons in the US arsenal, the AP and United Press International report. The new secrecy will make it nearly impossible to estimate the true cost of nuclear weapons, to show adherence to arms control treaties, or to pressure others nuclear weapons states to disclose the size of their arsenals.

The secrecy decision was revealed in an April 5 letter from the Department of Energy’s Office of Classification to the Federation of American Scientists (FAS). Hans M. Kristensen, director of the group’s Nuclear Information Project, said the FAS regularly asks for the information and that it’s been made public for decades.

“The decision walks back nearly a decade of US nuclear weapons transparency policy—in fact, longer if including stockpile transparency initiatives in the late 1990s,” Kristensen wrote in an April 17 memo, according to the AP.

There is no national security rationale for keeping the number secret, Kristensen told the AP, adding that it is “unnecessary and counterproductive.”

“This is curious,” he reportedly said, “since the Trump administration had repeatedly complained about secrecy in the Russian and Chinese arsenals. Instead, it now appears to endorse their secrecy.” 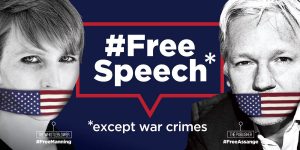 In April, the Pentagon halted its public disclosure of how much of Afghanistan is controlled by the Taliban, adding to a long list of progress reports from the war that are now being kept secret.

John Sopko, US Inspector General for Afghanistan Reconstruction, told the New York Times, “We’re troubled by it.” Keeping Sopko’s reports secret means, “The only people who don’t know what’s going on and how good or bad a job we’re doing are the people paying for it,” he said. Sopko and some in Congress have access to some of the information.

The new restrictions on public information about the 18-year-long occupation of Afghanistan are in addition to the October 2017 halt to disclosing Afghan military casualties, its performance assessments, and anti-corruption efforts by the Afghan Ministry of Interior, David Zucchino reported May 1 for the Times. Anthony Cordesman at the Center for Strategic and International Studies told the paper, “There is no reliable way to know who is ‘winning’ or the level of stalemate.”

Today’s increased military secrecy follows the March 2018 announcement by the Pentagon’s Missile Defense Agency (MDA) that it would no longer post the public calendar of upcoming missile tests and will keep the testing schedule classified. The schedule will only be made available to Congress the Seattle Times reported April 11, 2018. Lt. Gen. Samuel Greaves, director of the MDA which spans 14 time zones and employs over 9,000 military and civilian workers, reportedly said his test results will be made available after launches.

Expanding military control of information continues a pattern. Since June 8, 2002, the Pentagon has been allowed to keep secret all key missile defense test results. The military’s blanket classification of performance data was imposed following the disclosure of scientific evidence of a string of failed or faked tests and fabricated results, and after the FBI began an investigation into fraud and cover-ups inside the program. Then Secretary of Defense Donald Rumsfeld also waived all procurement oversight rules for the agency, laws designed to keep federal programs on budget.

Bruce Gagnon of the Global Network Against Weapons & Nuclear Power in Space wrote in June 2017 that, “Many of the tests are scripted, what [physicist] Michio Kaku calls ‘strap down rabbit tests.’ They can’t afford to release [details]. They would sink their boat.”

With secret test data, secret schedules, and an unaccounted, bottomless budget, the MDA’s mission impossible — “hitting a bullet with a bullet” — has wasted over $200 billion since 1983. Other military impossibilities — like victory in Afghanistan, or winning at nuclear deterrence — have cost trillions. They appear guaranteed to gobble up billions more as long as Pentagon censorship is allowed to hide the facts.