Canada can achieve 100% carbon-emission-free electricity production by 2035 by urgently promoting renewable energy, energy efficiency, smarter transmission, and by avoiding the cost, pollution, and delays of nuclear power, fossil gas, carbon capture, and carbon offsets. So says the David Suzuki Foundation in a new study. The report details an overhaul of Canada’s electricity sector and identifies vast potential to expand wind and solar capacity, sources cited by the International Energy Agency as “the cheapest sources of new electricity generation in history.” Energy transition pioneer Amory Lovins told the Guardian, “far better to deploy fast, inexpensive, and sure technologies like wind or solar than one that is slow to build, speculative, and very costly. Anything else makes climate change worse than it needs to be.”

In 2021 domestic renewable energy — wind, hydroelectric, solar, biomass, and geothermal — outproduced nuclear power for the second year running, the U.S. Energy Information Administration (EIA) found. Clean sources were responsible for 795 million megawatt-hours (MWh), 21% of energy production, while nuclear totaled 778 million MWh, or 20%. Solar Industry Mag reported April 26, 2022, that wind, the largest producer of renewable energy in the U.S., increased outputs by 12% in 2021 (14% in 2020), and utility-scale solar produced 28% more in 2021 (26% in 2020). The EIA predicts an additional 10% hike in renewable production for 2022. Globally, hydro-electric together with solar, wind, geothermal, and tidal produce more than twice as much energy (24.2%) as nuclear (10.3%), according to world-nuclear.org.

The World Nuclear Industry Status Report 2021 (WNISR) found that nuclear power production fell by more than 100 terawatt-hours (TWh), the greatest drop aside from the standstill following the Fukushima disaster. Although hydro-electric steadily outproduced nuclear over the last 30 years, other renewable sources such as wind, solar, and biomass have now globally surpassed nuclear. Proof possible: for the first time this year, hydro, wind, and solar together generated more than all fossil fuels in the European Union — though France still relies on nuclear for 71% of its energy.

Competitive clean energy casts shade on the need for nuclear, as the industry flounders to innovate expedient and economic technology. Given the minimum of 10-15 years needed to bring new Small Modular Reactors online, trials in Argentina, China, and Russia have been unimpressive. Furthermore, WNISR announced “net capacity addition” fell for nuclear to 0.4 gigawatts (GW) and rose by more than 250 GW in the renewable sector last year, leading the report to conclude “nuclear is irrelevant in today’s electricity capacity newbuild market.” The WNISR also cites cost, health effects, climate change effects, the global impact of COVID-19, and “bribery, corruption, and counterfeiting” in the nuclear industry as additional evidence that nuclear power is dying.

By 2050, the EIA predicts that wind and solar technologies will become as affordable as natural gas, as nuclear and coal continue to fall out of use. To make way for clean energy Congress must severe ties with dying industries, promote carbon fees and sunset credits, shut down pipelines and drilling leases, and halt initiatives to develop new poisoned nuclear theories or bailouts that keep dangerous reactors running past their licensed closure dates. 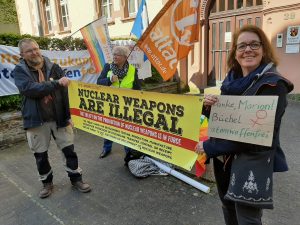 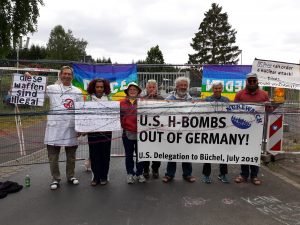 The Treaty on the Prohibition of Nuclear Weapons (TPNW) takes effect Friday, January 22, 2021.

After decades of campaigns of every kind to “ban the bomb”, to prevent the nuclear arms race, and later to freeze the arms race, and, the nuclear weapons prohibition outlaws not just their development, testing and possession, but forbids any threatened use — commonly known as “nuclear deterrence.” Like with other multi-generational struggles against slavery, torture, the death penalty, child labor, TPNW campaigners justly call it “the beginning of the end of nuclear weapons.”

The new international law  — which for the first time in weapons treaty law requires reparations and compensation to victims of H-bomb testing and production — is similar to earlier global prohibitions such as the Geneva Protocol (outlawing gas warfare), the Hague Conventions (forbidding poisoned weapons), the Chemical Weapons Convention, the Biological Weapons Ban the Convention on Cluster Munitions and the anti-personnel Mine Ban.

The difference here is that the world community has finally added to the list of despicable, loathsome, appalling and shunned weapons of war those devices whose effects contain and exceed beyond comprehension the accumulated evil of the all the rest—nuclear and thermonuclear weapons.

Nuclear weapons have been earnestly condemned for 75 years by legal scholars, religious leaders, peace groups, military commanders, prime ministers, presidents and corporate CEOs. They’ve been called “the ultimate evil” by the International Court of Justice in 1996 and any use of them was declared by the UN General Assembly as early as 1961 “a crime against [hu]mankind and civilization.” The TPNW’s language makes clear why: “Cognizant that the catastrophic consequences of nuclear weapons cannot be adequately addressed, transcend national borders, pose grave implications for human survival, the environment, socioeconomic development, the global economy, food security and the health of current and future generations, and have a disproportionate impact on women and girls, including as a result of ionizing radiation…”

Yet nuclear-armed countries all hold that their plans and threats to commit atomic violence are legal. For example, the US Navy Field Manual says, “There is at present no rule of international law expressly prohibiting States from the use of nuclear weapons in warfare. In the absence of express prohibition, the use of such weapons … is permitted.”

No more. The TPNW rebukes and nullifies this artful dodge, which is partly why its establishment is a monumental accomplishment. Forbidding nuclear weapons by name is also a triumph of harrowing urgency, considering the number of doddering heads of state with access to nuclear launch codes and especially in view of the atomic scientists’ “Doomsday Clock” being set at 100 seconds to midnight.

Countries with nuclear arsenals rejected the UN negotiations in 2017 that produced the TPNW, and they dismiss its obligations because the law applies only to states that ratify it. The duplicity of the nuclear-armed governments was displayed by then US UN Ambassador Nicki Haley who led 35 countries in a boycott of the talks. Haley said the treaty would end up disarming the nations “trying to keep peace and safety”. At the time, the United States was militarily occupying and/or at war in Afghanistan, Iraq, Syria, Yemen, Somalia, Libya, and Niger. Haley’s speech must have reminded the more than two-thirds of the UN Ambassadors that “hypocrisy is the respect that vice pays to virtue.”

The power of the new Treaty is worth celebrating for now, but then it must be employed by us all to end the public’s ignorance, denial, forgetfulness, and habituation regarding plans for nuclear war, and to bring the nuclear weapons states into compliance. ###

— John LaForge is a Co-director of Nukewatch, and with Kelly Lundeen co-edits its newsletter, Nukewatch Quarterly.

On January 22, the Treaty on the Prohibition of Nuclear Weapons will enter into force. The treaty bans the development, production, possession, deployment, testing, use and just about anything else you can imagine related to nuclear weapons.

Approved at the United Nations by 122 countries in 2017, and subsequently signed by 86 and ratified by 51 nations, the nuclear weapons ban will join the venerated status of international prohibitions already established against lesser weapons of mass destruction. These earlier agreements include the Geneva Gas Protocol, the Chemical Weapons Convention, the Biological Weapons Convention, the Ottawa Treaty or  Mine Ban Convention and the Convention on Cluster Munitions.

The Treaty on the Prohibition of Nuclear Weapons is no magic wand. Nine nuclear-armed states claim that the treaty doesn’t apply to them, and it’s true that only governments that are “states parties” to the treaty are subject to its prohibitions and obligations. However, the treaty can be a kind of a lever and a beacon for achieving the elimination of nuclear weapons, a goal every government on earth claims to desire.

Decades of refusal to conclude “good faith” negotiations for nuclear disarmament “at an early date,” which the United States and four other nuclear nations agreed to in the 1970 Treaty on the Non-Proliferation of Nuclear Weapons, have left the rest of the world fed up. Fifty years later, nine nuclear-armed militaries possess more than 13,000 nuclear weapons, arsenals that mock their claimed commitment to disarm “at an early date.”

As with bans on other weapons of mass destruction, scofflaw states that continue to produce and use nuclear weapons will increasingly be condemned and shunned as outliers and rogue actors. And nuclear-armed states have already been stung by the treaty’s imminent entry into force. Last October, the Trump White House urged those governments that had ratified the treaty to withdraw their ratifications. Happily, none did.

Elsewhere, financial divestment campaigns in Europe are succeeding, pressing hundreds of institutions to get out of the business of genocidal atomic violence. The Dutch pension fund APB, the fifth largest of its kind in the world, has announced  it will exclude companies involved in production of nuclear weapons. It joins more than seventy other European banks, pension funds, and insurance companies that have already adopted divestment policies.

January 22 marks the culmination of the effort led by the International Campaign to Abolish Nuclear Weapons, civil society, and non-nuclear-armed states to create the treaty. It is also the beginning of a new movement that will, in the end, see the elimination of the existential nuclear threat.

Given the need to stop the Biden administration from continuing the $2 trillion commitment to “modernize” U.S. nuclear weapons, build new bomb plants, and invest in new nuclear weapons, the treaty and its message could not be timelier or more compelling.

As supporters the world over have noted, this treaty is the beginning of the end of nuclear weapons.

John LaForge is a co-director of Nukewatch in Wisconsin.

This column was produced for the Progressive Media Project, which is run by The Progressive magazine, and distributed by Tribune News Service.