Newsweek recently featured biologist Mary Olson’s work on the disproportionate impact of radiation on young girls, citing, “young girls could be up to 10 times more vulnerable, with girls [under] five twice as likely to develop cancer as boys of the same age.” Olson, who recently retired from a long career with the nonprofit Nuclear Information and Resource Service in Maryland, told Newsweek that rapid cell division in infants and children makes “their DNA more vulnerable to tumor-inducing damage.” This is particularly true in young girls because, Olson explains, stem cells are sensitive to harm from radiation and young females have higher concentrations of stem cells than males or pubescent females.
The US Nuclear Regulatory Commission’s archaic and grossly biased standard called “Reference Man” estimates health risks from ionizing radiation based on a male who is “20 to 30 years old, weighs 154 pounds, is 5-foot and 6 inches tall, and is Caucasian with a Western European or North American lifestyle” — a reference nothing like the profile of the most vulnerable — girls under five. Olson’s work demonstrates that “Reference Man” exposes girls and young women to dangerously high radiation, “not just from nuclear warfare but also from more routine radiation exposures like CT scans, air travel, and medical x-rays.” — Sources: Newsweek, October 10, 2022; and the Gender and Radiation Project at genderandradiation.org.

The Nuclear Regulatory Commission was notified of a “nonemergency” at the 51-year-old Monticello reactor on the Mississippi River in Minnesota — one of the oldest in the United States and a General Electric unit identical to the three meltdown-destroyed reactors at Fukushima. On Nov. 22, owner Xcel Energy informed the NRC of “an on-site monitoring well that indicated tritium activity above the [Offsite Dose Calculation Manual] … reporting levels.” Translation: Groundwater from a well on company grounds is poisoned with radioactive tritium above permitted levels. The short NRC notice then says “The source of the tritium is under investigation,” although no mention is made of the extent of groundwater contamination, or whether off-site wells have been tested. Without data from groundwater beyond the site’s boundaries, the NRC notice then reaches the unsubstantiated, upbeat conclusion that “there was no impact on the health and safety of the public or plant personnel.” Xcel’s claim recalls the great undersea explorer Jacque Cousteau who said: “A common denominator, in every single nuclear accident — a nuclear [reactor] or on a nuclear submarine — is that before the specialists even know what has happened, they rush to the media saying, ‘There’s no danger to the public.’ They do this before they themselves know what has happened because they are terrified that the public might react violently, either by panic or by revolt.” 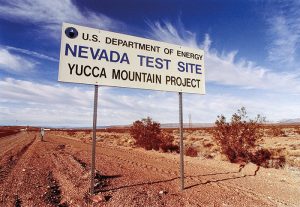 The Manhattan Project that designed and produced the first atomic bomb also produced the first modern nuclear reactor, the B reactor. Located at the Hanford Reservation in eastern Washington State, it produced plutonium for the first nuclear testing at Trinity site in New Mexico as well as for the atomic bomb used in Nagasaki in 1945 that ended more than 70,000 lives and destroyed the health of an additional 70,000+ people. The first modern nuclear reactor was developed to create nuclear weapons to kill civilians in war.

AEC: Successor of the Manhattan Project

Following the atomic bombings of Hiroshima and Nagasaki, the US Congress created the Atomic Energy Commission (AEC), which took over the Manhattan Project’s sprawling scientific and industrial complex. The AEC focused on designing and producing nuclear weapons, conducting weapons testing in Nevada and the Pacific, and developing reactors for naval propulsion. The Atomic Energy Act of 1954 gave the AEC authority to regulate the commercial nuclear power industry while simultaneously promoting nuclear energy. The AEC was disbanded in 1974 and replaced with the Energy Research and Development Administration, for reactor R&D, naval reactors, and nuclear weapons programs, and the US Nuclear Regulatory Commission to regulate commercial power reactors and other uses of nuclear materials.

The Department of Energy

Since 1977, the Department of Energy oversees both the nation’s nuclear weapons program and its energy system. The DOE’s National Nuclear Security Administration is composed of a nationwide complex of government-owned, contractor-operated national security laboratories, and nuclear weapons production facilities. Together with the Pentagon, the DOE assesses the safety of its nuclear weapons stockpile. The DOE is also responsible for the environmental “cleanup” of nuclear weapons complexes, including Hanford, which is perhaps the most radioactive and hazardous place in the United States.

The US nuclear energy enterprise supports the nuclear navy, as the Naval Nuclear Propulsion Program, jointly operated by the DOE and the US Navy, which provides naval nuclear reactors fueled by weapons-grade highly enriched uranium. Under the new “AUKUS” deal, the US and UK will transfer naval nuclear propulsion technology and nuclear-powered submarines to Australia.

Japan has 47 metric tons of separated plutonium (enough to make 6,000 nuclear weapons according to the Arms Control Association), and is one of the five countries that possess most of the global non-military stockpile of “excess” plutonium — along with the US, UK, Russia, and France. This plutonium is a weapons proliferation threat and a target of nuclear terrorism because it could be used to develop thousands of nuclear warheads. Separating plutonium from used nuclear reactor fuel — from commercial reactors — is formally allowed under the 1988 US-
Japan “123 agreement.”

The Trump Administration’s Nuclear Posture Review (NPR) of 2018 explicitly stated that ensuring “the necessary reactor capacity to produce an adequate supply of tritium to meet military requirements” is one of the initiatives that the US will pursue “to ensure the necessary capability, capacity, and responsiveness of the nuclear weapons infrastructure, and the needed skills of the nuclear enterprise workforce.”

The Biden Administration’s 2022 NPR also notes that “modernizing tritium production will assure a reliable and resilient domestic source and options for longer stockpile life tritium components.” It also states: “Meeting our nuclear policy goals would not be possible without a capable, motivated workforce. The military and civilian personnel who work every day in the nuclear enterprise are a national asset whose accomplishments are rarely seen but vitally important.”

The Nuclear Energy Institute, an industry lobby group that promotes nuclear power, is explicit about the links between reactors and weapons. Its website says the United States’ nuclear-powered navy (the world’s largest) is supported by the commercial nuclear energy industry and its shared nuclear supply chain; nuclear reactors and fuel facilities are a critical part of the US infrastructure, and they bolster the mission of the US Navy, other areas of the Pentagon and the DOE; and advanced reactors will also play a role in the national defense of the future.

The US commercial nuclear power program compliments its nuclear weapons enterprise. Consequently, supporting nuclear energy is to support nuclear weapons. To achieve the total elimination of nuclear weapons, we need to halt commercial production of tritium and the commercial use of highly enriched uranium and plutonium by shutting down operating reactors and halting the construction of new reactors.

— Mari Inoue is a lawyer and activist based in New York City and a co-founder of Manhattan Project for a Nuclear-Free World (mp-nuclear-free.com).

Editor’s note: The Tennessee Valley Authority — owned by the US Government — announced plans to continue violating the separation of civilian and military nuclear programs by increasing tritium production for nuclear weapons in the two Watts Bar civilian reactors, Savannah River Watch reports. The tritium rods irradiated in TVA reactors are processed at the DOE’s Savannah River Site, where the tritium goes into nuclear weapons. This is more proof that Biden’s Secretary of Energy Jennifer Granholm will continue to violate nuclear non-proliferation norms by using civilian nuclear facilities for production of nuclear weapons materials.

Radioactive waste has piled up at the Hanford, in Richland, Washington, since the production of plutonium began there in 1943 for use in the very first atom bomb, code-named “Trinity,” detonated outside Los Alamos, New Mexico, and the plutonium bomb, dubbed “Fat Man,” dropped on Nagasaki, Japan.

The first round of single-shelled radioactive waste storage tanks on the site began leaking early in the 1950s, prompting the use of double-shelled tanks in the 1960s. These million-gallon tanks, 177 in total, house over 55 million gallons of low- to high-level radioactive waste, are prone to leaking, and are stored in a 150 foot deep football field-sized crater. Since the early 2000s, it has been the goal of the Energy Department to build a Waste Treatment Plant with the capacity to immobilize a large portion of the waste by mixing it with molten glass for permanent storage in a process called vitrification. The DOE’s plan is to start with low-level waste, including liquids separated from high-level radioactive waste in the double-shelled tanks, and to go from there.

On October 8, the 300-ton vitrification melter began heating up, the first step of the process, and the program had its first hiccups. The melter, designed to liquefy glass to be mixed with radioactive waste, is supposed to gradually heat to 2,100 degrees Fahrenheit over a period of weeks. In the first attempt, the melter began to overheat, and workers had to halt heating after only two days, to figure out the next steps. The melter was still empty, so there was no danger to workers or the environment. Leaders at the site have acknowledged that this is a first, and they want to make sure the melter can get up to temperature and melt glass mixed with other materials before bringing radioactive materials into the picture. Vitrification has successfully stabilized radioactive wastes in the past but on a much smaller scale.

Meanwhile on August 9, Nagasaki Day, two tribes, nine agencies, and governors Kate Brown of Oregon and Jay Inslee of Washington sent letters to President Biden urging him to expand the budget for cleanup efforts at what has been called “the most toxic place in America.” In October, every Washington State Congressional leader, Democrat and Republican, followed suit with a letter of their own. As we go to print, they are still awaiting a response.

— Adrian Monty works with the Oregon State University Downwinder Project. She is an environmental journalist with a focus on atomic issues.