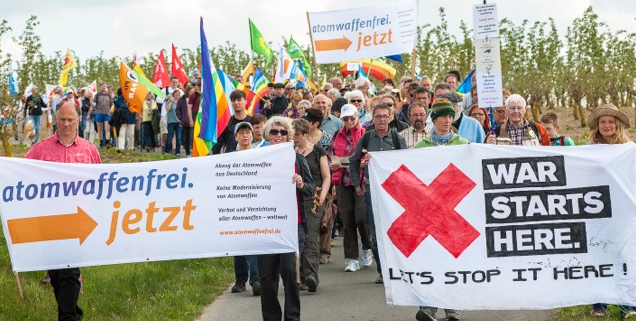 For the first time in a long-standing campaign to remove US nuclear weapons from Germany, a delegation of US peace activists will participate in protests at the Büchel Air Base, July 12 to 18, demanding the withdrawal of the 20 remaining US H-bombs still deployed there. Notable among the 11-person delegation are seven participants who have served a combined total of 36 years in US jails and prisons for protest actions taken against nuclear weapons programs and the war system.

The delegation of eleven US activists* — from Wisconsin, California, Washington-DC, Virginia, Minnesota, New Mexico, Tennessee, and Maryland — has been brought together by Nukewatch and will join the coalition of 50 German peace and justice groups and organizations converging on the air base. An international banner displayed at the Nukewatch office.

This past March 26, activists in Germany launched a 20-week-long series of nonviolent protests to rid Büchel of the US B61 nuclear-armed gravity bombs. The actions continue through August 9, the anniversary of the US atomic bombing of Nagasaki in 1945. The US delegation will join the International Week, July 12 to 18, along with peace activists from Belgium, The Netherlands, and France, as well as Germany.

“The world wants nuclear weapons abolished,” said US delegate Bonnie Urfer, a long-time peace activist and former staffer with the nuclear watchdog group Nukewatch, in Wisconsin. “To waste billions of dollars replacing the B61s when they should be scrapped is criminal considering how many millions are in need famine relief, emergency shelter, and safe drinking water,” Urfer said. Urfer has spent 6 and 1/2 years incarcerated for a string of misdemeanor-level protests she calls “civil resistance” against war, nuclear weapons and nuclear power.

The US delegation and the German public is particularly concerned that the US is planning to produce 480 new hydrogen bombs — the so-called “B61-12”—  to replace the 180 B61 bombs now deployed in five European NATO countries including the 20 at Büchel. Production is not expected to start before 2022.

Under a scheme known as “nuclear sharing,” Germany, Italy, Belgium, Turkey, and The Netherlands still deploy and conduct NATO nuclear war maneuvers using the US H-bombs, although all six states are parties to the Nuclear Non-Proliferation Treaty (NPT). Articles I and II of the NPT explicitly prohibit nuclear weapons from being either transferred to or accepted from other countries. The US is the only country in the world that arms other countries with its nuclear weapons. (China may lease a nuclear-powered submarine but not nuclear weapons from Russia.)

Although the planned B61 replacement bomb is a completely new weapon, the Pentagon calls the program “modernization” in order to skirt the NPT’s prohibitions. The new bomb is being touted as the first ever “smart” or precision nuclear weapon, built to be guided by satellites, and aimed with a new tailfin attachment, making it unprecedented. New nuclear weapons are unlawful under the NPT, and President Barak Obama’s 2010 Nuclear Posture Review required that “upgrades” to the Pentagon’s current H-bombs must not have “new capabilities.” Overall cost of the new bomb, which is not yet in production, is estimated to be up to $12 billion.

The March 26 start date of “Twenty Weeks for Twenty Bombs” is significant for Germans. First, on March 26, 2010, Germany’s Bundestag voted overwhelmingly — across all parties — to have the government work to remove the US weapons from German territory. In 2008, US and NATO officials claim that “deterrence” makes retaining the B61 important in Europe, but the US European Command said that there would be “no military downside to the unilateral withdrawal of nuclear weapons from Europe.”

Second, on March 27 this year the United Nations General Assembly (UNGA) in New York launched formal negotiations for a treaty banning nuclear weapons. The UNGA will convene a second session, June 15 to July 7, to produce a binding “convention” banning any production, possession, deployment, or use of nuclear weapons, in accordance with Article 6 of the NPT. (Similar treaty bans prohibit poison and gas weapons, land mines, and cluster bombs.) A formal Draft Treaty was unveiled May 22 in Geneva. Nuclear-armed countries led by the United States tried unsuccessfully to derail the negotiations and boycotted the first round. Germany’s government under Angela Merkel joined the boycott in spite of broad public support for nuclear disarmament.

A huge majority of the German public supports both the UN treaty ban and the ouster of US nuclear weapons from its territory. According to a poll commissioned by the German chapter of the International Physicians for the Prevention of Nuclear War and published in March 2016, a staggering 93% want nuclear weapons banned. Some 85% agreed that the US weapons should be withdrawn from Germany, and 88% said they oppose US plans to replace the current H-bombs with the new B61-12.

*Detailed information about the US delegation to Büchel: