Click the links below to access articles from the Winter 2022 Quarterly Newsletter. Page numbers take you to the pdf of each page as they appear in the print version. Individual articles are also tagged by issue category.

United States to Hurry Transfer of New Nuclear Bombs to Europe
Why Not Just Pay the Fine for Resisting the B61s?
Nukewatch Co-Director to Report to Prison in Germany

Who Deserves a Nobel Peace Prize in Ukraine?
Nuclear Threats in Ukraine: Real and Hyped

The Inseparable Link Between Military and Civilian Reactors
Hanford Clean Up Hiccups
The US Nuclear Industry: Older, but Not Wiser

At the United Nations on October 5, Australia boldly ended five years of opposition to the Treaty on the Prohibition of Nuclear Weapons (TPNW), the International Campaign for the Abolition of Nuclear Weapons (ICAN) reports. Rather than voting against the annual UN General Assembly resolution urging countries to join the treaty — as it did under its former government — Australia “abstained” for the first time.

The plucky reversal by a military ally of the United States, the leader of minority opposition to the landmark treaty, was applauded by campaigners and by other governments. Gem Romuld, with ICAN Australia, said in a statement, “The majority of nations recognize that ‘nuclear deterrence’ is a dangerous theory that only perpetuates the nuclear threat and legitimizes the forever existence of nuclear weapons, an unacceptable prospect.”

New Zealand’s minister for disarmament and arms control, Phil Twyford, said his government welcomed “Australia’s approach” to the treaty. Indonesia’s ambassador to Australia, Siswo Pramono, said the Aussie’s positive shift on the treaty would “give encouragement to others who believe that we are on the right path” in seeking abolition. Indonesia, New Zealand, Malaysia, and Ireland were among the United Nations members co-sponsoring this year’s UN resolution pressing additional ratifications of the TPNW.

In 2018, Anthony Albanese, Australia’s Labor leader and new prime minister, initiated a resolution committing the party to sign and ratify the TPNW. As he introduced the motion, Albanese said, “Nuclear weapons are the most destructive, inhumane, and indiscriminate weapons ever created. Today we have an opportunity to take a step towards their elimination.” The Labor party reaffirmed its position in 2021, and Albanese’s “abstain” vote is merely abiding by the party’s platform. A formal cabinet-level decision to support and join the TPNW is pending, according to the Guardian.

The treaty, which prohibits the development, testing, stockpiling, use, and threatened use of nuclear weapons, now has 91 signatories, 68 formal ratifications; it entered into force last year.

The hostile US reaction to Australia’s action on October 7 was as swift as it was laughable. The US Embassy in Australia’s capitol Canberra announced that the vote to abstain would “obstruct” Australia’s reliance on US nuclear forces. However, most Australians view nuclear weapons as a threat to the world and want them abolished. The country’s Medical Association for Prevention of War tweeted, “The majority of the Australian people support our country joining the TPNW. Our government should act accordingly.” An Ipsos poll taken in March 2022 found 76% of Australians supported signing and ratifying the treaty, the Guardian reported.

Both the Trump and Biden Administrations have urged US allies to reject the 2017 treaty, and both of them continued Obama’s $1.7 trillion program, launched in 2014, to rebuild the country’s entire nuclear weapons complex and replace all the major nuclear weapons systems — including submarines, bombers, land-based missiles, and forward-deployed H-bombs in Europe — with new versions. The plan’s unfathomable nearly $2 trillion cost — a proposed 30-year-long avalanche of weapons industry contracts — continues in the face of increasingly severe global crises of climate chaos, ocean-level rise, war-displaced populations, droughts, wildfires, flooding, deforestation, desertification, famine, and water shortages.

When in office, Trump publicly scolded countries that had joined the treaty, preposterously telling them to withdraw their ratifications. For his part, President Biden reportedly urged Germany and Japan to avoid, even as “observers,” the First Meeting of States Parties to the treaty, which took place in Vienna last June. Several US allies snubbed President Biden’s directive and attended the meeting, including Norway, Sweden, Switzerland, and Australia, and NATO members Belgium, Germany, and The Netherlands. Opposition by the United States, as one of only nine nuclear powers in the world, represents a small global minority, ICAN’s Romuld told the Guardian.

“As a close neighbor and stakeholder, the Chinese side expresses grave concern over this. The Fukushima accident is one of the most serious in world history. The leak of large amounts of radioactive materials has had far-reaching implications on the marine environment, food safety, and human health. Despite doubts and opposition from home and abroad, Japan has unilaterally decided to release the Fukushima wastewater into the sea before exhausting all safe ways of disposal. … This is highly irresponsible and will severely affect human health and the immediate interests of people in neighboring countries.”

Meanwhile on December 9, the Pacific Alliance of Municipal Councils’ meeting on Saipan adopted a resolution condemning “the Fukushima Nuclear Power Plant and the Japanese government’s 30-year

In Japan’s experimental trial-and-error mission to recover from the March 2011 reactor meltdowns, millions of tons of radioactively contaminated soil and debris — scraped up from surrounding lands and collected in 1-ton bags — have reportedly been “decontaminated.”

Japan’s daily Asahi Shimbun on December 7, reports that “the volume of decontaminated soil in Fukushima Prefecture … is about 14 million cubic meters.” Japan’s public TV network NHK reported December 9, “Soil exposed to radioactive fallout from the accident at the Fukushima Daiichi nuclear power plant has been decontaminated,” but neither report explained how or where the soil was decontaminated. Japan’s Environment Ministry has decided to experimentally use some of this waste soil — “which still contains low-level radioactive substances” — as a way “to reduce that volume before disposal.”

The plan is to use some of the waste in lawns, parking lots, and flower beds. The ministry reportedly promised that “tests will be conducted to verify changes in radiation doses in the air.” Radioactivity spread by rainfall to surface water or ground water was not mentioned in the news report. The story notes that the contaminated soil measuring less than “8,000 becquerels per kilogram … will be used in the trial runs.” The “becquerel” is a measure of radioactivity usually regarding the presence of cesium-137 which was dispersed in large amounts by the disaster.

The only winners in the war in Ukraine are weapons manufacturers. This is according to William Hartung and Julia Gledhill for the Quincy Institute in April, Paula Reisdorf writing for CorpWatch in May, Shlomo Ben-Ami for Project Syndicate in September, and Jeremy Scahill for the Intercept in December. The numbers prove it.

Between February and April this year, Hartung and Gledhill note, the US committed to giving approximately $2.6 billion in military aid to Ukraine, bringing the Biden administration spending to more than $3.2 billion and rising, according to Pentagon reports (“How Pentagon Contractors Are Cashing in on the Ukraine Crisis”).

“Weapons companies were already receiving a massive amount of money from the US government before the war in Ukraine began — some $768 billion in 2021. In [May], the US Congress approved a $40 billion spending package for the Ukraine war, with a big chunk going to arms companies,” Reisdorf wrote (“Weapons Makers Profit Handsomely off Ukraine War”). That chunk amounted to $10 billion, with the lion’s share going to Lockheed Martin, Raytheon, Boeing, General Dynamics, and Northrop Grumman, according to Scahill’s piece, “The War Caucus Always Wins.” 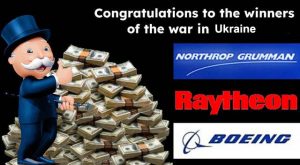 Scahill reports that some of the latest contracts include: $1.2 billion to Raytheon to produce six National Advanced Surface-to-Air Missile Systems in support of the efforts in Ukraine; $431 million for Lockheed to produce M142 High Mobility Artillery Rocket System launchers to replenish those sent to Kyiv; and a separate $521 million for Lockheed to replace Guided Multiple Launch Rocket Systems going to Ukraine.

Reisdorf reports that by May Northrop Grumman’s stocks were up by about 16 percent, and shares of Lockheed Martin and Raytheon Technologies had increased by 28 and 20 percent respectively by March.

The Wall St. Journal updated the profiteering news November 24, noting that Lockheed shares are up 36 percent since the start of the year, General Dynamics’ are up 22 percent, and Raytheon jumped 12 percent.

Kristen Bayes, a spokesperson for the Campaign Against the Arms Trade in London told Sky News the transfer of weapons to Ukraine is “not problem-free,” and warned, “You might think you’re handing over weapons to people you know and like, but then they get sold on to people you don’t.” Even US Defense Sec. Lloyd Austin, has “acknowledged that some weapons given to Ukraine have also been ending up in the hands of Russians,” Bayes said.

The United States has sped up the delivery to European NATO bases of its new thermonuclear bomb called the B61-12, Politico reports.

Citing “a US diplomatic cable and two people familiar with the issue,” the outlet reports that the 50-kiloton B61-12 will be flown to six NATO bases in five NATO states in December 2022, rather than the planned springtime delivery.

The individual sources familiar with the upcoming shipment to Europe, who asked not to be named, “confirmed the accelerated time-frame reported in the diplomatic cable,” Politico noted.

Tom Collina, director of policy at the Ploughshares Fund, told Politico that the accelerated transfer of the newest version of the B61 — which the Air Force says is more accurate than the bombs it will replace — “could be escalatory. We’ll see.”

Pentagon spokesperson Brig. Gen. Patrick Ryder told Politico in an email that the $10 to $12 billion plan to “swap out older weapons for the upgraded B61-12” has been “underway for years” and “is in no way linked to current events in Ukraine and was not sped up in any way.”

The B61-12 gravity H-bomb will replace two earlier versions, the B61-3s and -4s, about 100 of which are stationed at NATO bases in Germany, Italy, Belgium, The Netherlands, and Turkey, Politico confirmed.

The giant US Air Base at Ramstein, Germany is also involved in the program. Ramstein Air Base operates the only branch of the US Air Force’s Defense Nuclear Weapons School outside the United States. The DNWS trains pilots in planning and preparing attacks with nuclear weapons. Other branches are in New Mexico, Florida, Texas, Georgia, Oklahoma, and Ohio. A part of the Air Force Nuclear College, the Ramstein-based DNWS is described on its website as being “responsible for delivering, sustaining, and supporting air-delivered nuclear weapon systems for our warfighters … every day,” and, “Programs managed by the directorate include the B61-12 Life Extension Program.”

None of this nuclear attack madness need proceed any further. Oscar Arias proposed last July 19 that as a good-will gesture of de-escalation and trust-building, NATO could — instead of replacing them with more destabilizing bombs — offer to withdraw all its nuclear weapons from NATO bases in Europe in exchange for Russia’s agreeing to begin peace negotiations.

Caitlin Johnstone made the point Oct. 19 in CounterPunch, noting that, “We survived the Cuban Missile Crisis because US President John F. Kennedy secretly acquiesced (Robert Moore wrote “wisely agreed”) to Soviet Premier Nikita Khrushchev’s demand that the US remove the Jupiter missiles it had placed in Turkey and Italy, which was what provoked Moscow to move nukes to Cuba in the first place.”