In March 2020, the US Environmental Protection Agency suspended its enforcement of certain environmental laws, citing coronavirus risks. “EPA is committed to protecting human health and the environment, but recognizes [that] challenges resulting from efforts to protect workers and the public from Covid-19 may directly impact the ability of regulated facilities to meet all federal regulatory requirements,” EPA administrator Andrew Wheeler said in a press release. The onging rule suspension allows regulated industry to break EPA rules and regulations, if the violations can be linked to Covid-19. There was no end date set for the pollution holiday. 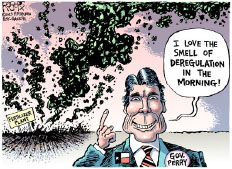 The move allows increases in air and water pollution, improper handling of fracking wastewater, and suspension of industrial reporting of greenhouse gas emissions. Former EPA officials were stunned, and predicted catastrophic consequences. Gina McCarthy, president and CEO of the Natural Resources Defense Council and former EPA Administrator, said, “This is an open license to pollute. The administration should be giving its all toward making our country healthier right now. Instead it is taking advantage of an unprecedented public health crisis to do favors for polluters that threaten public health.”

Last January Mr. Trump signed a repeal of water protections that had limited the pollution of drinking water sources for about one third of the country. Trump’s repeal allows farm and industrial wastes to pollute millions of miles of streams and about half of US wetlands.

The US Nuclear Regulatory Commission also issued risky pandemic rules that raise work-week caps from 72 to 84 hours, and pause reactor inspections for 18 months. Reactor refueling will continue uninterrupted, although some workers travel to small communities, potentially spreading Covid-19 infections. Beyond Nuclear’s Kevin Kamps called the action dangerous. “How inspections, repairs and replacements of safety-significant systems can go undone and not increase risk, has not been adequately explained by the NRC.” 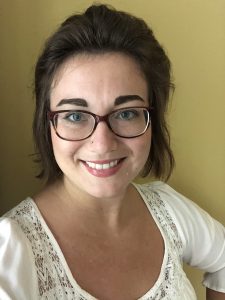 Hello everyone, I am thrilled to join the team at Nukewatch! I am from Northwestern WI, and grew up less than 15 miles from the Nukewatch office. My first love is art, and I have been pursuing the rather obscure field of art conservation for about 11 years now. I received a Bachelor of Fine Arts in Art History from the University of Wisconsin Eau Claire, and a Master of Fine Arts in Book Arts from the University of Iowa. I am currently a third-year candidate in Library and Archives Conservation at the Art Conservation Department at SUNY Buffalo State College. In September 2020 I will begin a 12-month internship at the Folger Shakespeare Library in Washington, D.C., and will receive my MFA in Art Conservation in 2021.

This year I found myself back home as summer internship plans were cancelled due to Covid-19. My mom has been volunteering for a time at Nukewatch and my curiosity led me to volunteer as well. The concepts of nonviolence, social responsibility, anti-nuclear direct action, and the importance of living in harmony with our environment were instilled in me at a young age. My artwork always reflects the beauty of nature, using natural dyes and plants for prints. The rape and destruction some seem determined to inflict on our natural environment is a source of great concern for me. Therefore, I am excited to join Nukewatch and assist in increasing awareness of the environmental and social concerns surrounding the use of nuclear weapons and power. —Christine

Quotations excerpted from the report by Jane Braxton in the The Atlantic’s Aug. 10, 2020 edition.

In the 1,000-square-mile exclusion zone around the Chernobyl nuclear reactors in Ukraine…

“… wildfires … have grown larger and more frequent. Each fire releases radionuclides, just as [Vasyl Yoschenko, a Ukrainian radio-ecologist] and his colleagues documented…. But none has incinerated the landscape at the scale of the fires that burned this past April. They were far larger than any since the 1986 disaster, burning for weeks and scorching nearly 165,600 acres.…[See Summer 2020 Nukewatch Quarterly, p. 6]

“Monitors in Norway, 2,000 miles away, detected increased levels of cesium in the atmosphere. Kyiv was smothered in smoke. Press reports estimated that the level of radiation near the fires was 16 times higher than normal, but we may never know how much was actually released: Yoschenko, [Sergiy] Zibtsev [a forestry professor at the National University of Life and Environmental Sciences of Ukraine], and others impatient to take on-the-ground measurements were confined to their homes by the coronavirus pandemic.…

“When Chernobyl’s trees burn, they send their stored radionuclides aloft as inhalable aerosols. Instead of blasting from a single source, as it did in 1986, the contamination now comes from the trees that cover some 660 square miles around the nuclear power plant.… If Chernobyl forests burn, contaminants will migrate outside the immediate area,” says Zibtsev. “We know that.”

[Beginning in 1993, Zibtsev] “spent the next five summers collecting soil and vegetation samples that were later analyzed for traces of radionuclides. The radiation he found there was higher than it had been in the period immediately following the explosions, a surprising observation until Yoschenko’s 2003 experimental burn explained it: Fires had burned 12,500 acres in 1992….

Between 1946 and 1958, the US performed 67 nuclear bomb test explosions in the Marshall Islands, equaling 1.6 Hiroshima-size explosions a day for twelve years. The Marshallese people were relocated away from testing sites, but did not escape the radioactive fallout that spread through the islands, causing burns, birth defects, and cancers. Some were purposely allowed to return to radioactive areas to inform US research. In the 1970s, over 110,000 cubic yards or 3.1 million cubic feet, of plutonium-contaminated soil and debris from the bomb tests were collected and abandoned on Runit Island under the “Runit Dome,” an unlined crater—left by a bomb test—covered with a concrete cap.

In 2019, Congress ordered the Department of Energy to address the threat of radioactive material leaking from Runit Dome, and to draft a repair plan. The DOE’s 2020 report claims the dome “is not in any immediate danger of collapse or failure,” but does admit that rising sea levels could affect the stability of the cracked contrete. Groundwater contamination could increase and, the report says, “no definitive data exists on how these events might impact the environment.” The DOE planned a groundwater radiochemical analysis program, though it’s now paused due to current travel restrictions. The DOE claims that rising levels of plutonium found in lagoon waters near the dome are due to existing contamination in sediments, not from materials spreading from the unlined crater. A dome repair plan was not included in the DOE report, although according to the World Health Organization the dome was never a long-term solution.

Since the report was based soley on US government data, critics have demanded an independent evaluation of the dome’s condition. US Rep. Tulsi Gabbard, D-Hawaii, and Rhea Moss-Christian, Chair of the Marshall Islands Nuclear Commission, accuse the DOE of downplaying the health and environmental risks posed by rising sea levels and storm surges on the dome’s decrepit concrete. Moss-Christian’s commission has condemned the lack of consultation between the DOE and independent scientists or the Marshallese people. The absence of data in the report makes it “disappointing,” said Rep. Gabard, who even called it “flippant.” Moss-Christian said, “So my main takeaway from the report is that many risks are still ‘unknown.’” —CM

Fire broke out June 12 in France’s nuclear-powered submarine La Perle while it was in drydock in the Mediterranean port of Toulon. The submarine burned for 14 hours before firefighters extinguished the blaze, Reuters reported.

The fire was doused when foam was used to flood the sub’s rear compartments. Maritime officials said the Perle’s “reactor rooms remains untouched.” The French navy said that there were no casualties and no risk of radiation release “because the nuclear [reactor] fuel had been removed during the renovation of Perle,” the Agence France Presse (AFP) reported. “There was a fire, but no, there was not a nuclear accident,” said Defence Minister Florence Parly, according to AFP. “There was absolutely no nuclear fuel aboard and not a single weapon,” Parly said.

One of six French “attack” submarines assigned to hunt other subs and guard other nuclear-armed, long-range missile submarines, Perle did not carry nuclear weapons. Launched in 1993, Perle is already eligible for decommissioning, and the fire damage may force its retirement. —CM