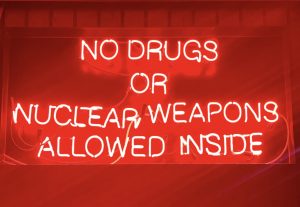 With existential national security threats from floods, droughts, wildfires, water pollution, sea-level rise, and peak oil,[1] the US Air Force, the Air National Guard and nuclear weapons manufacturers could do crucial defense work in the US heartland by building, installing, managing and expanding renewable (wind and solar) electric power systems — instead of polishing their 400 Minuteman III intercontinental ballistic missiles, and preparing to welcome an astronomically expensive replacement missile dubbed Ground-Based Strategic Deterrent. Call such a switch a “Climate Defense Initiative” since it would constitute deterrence against actual threats.

But no. Congress’s “ICBM Coalition,” missile contractors Lockheed Martin, GE, Northrup-Grumman, Boeing, and United Technologies, hundreds of subcontractors, their lobbyists, and public relations departments have conjured implausible but scary sounding reasons for paying an estimated $264 billion for yet another new rocket system. Since 1955, the nuclear-armed rocket gravy train has invented reasons for Atlas missiles, Titan missiles, Minuteman I, II and III missiles, and even a few dozen Peacekeepers.

The proposal to replace today’s 400 land-based ICBMs is so unsound and unpopular that even centrist organizations and individuals have condemned it (most for the wrong reasons), among them the editorial board of Bloomberg News, the Union of Concerned Scientists, the Arms Control Association, Defense News, the Bulletin of the Atomic Scientists, former Secretary of Defense William Perry, and a handful of retired military commanders.

Six years ago, the Bulletin referred to “the significant number of ‘expert’ studies that have appeared over the past five years suggesting that the ICBM leg of the nuclear triad should be deactivated”.[2] Gen. James Cartwright, a former Vice Chair of the Joint Chiefs of Staff, chaired a 2012 study group whose final report — co-signed by then Senator and later Secretary of Defense Chuck Hagel — said in part: “No sensible argument has been put forward for using nuclear weapons to solve any of the major 21st century problems we face …. In fact, nuclear weapons have on balance arguably become more a part of the problem than any solution.” Secretary Perry warns at his website, in speeches and in his memoir that ICBMs, “are simply too easy to launch on bad information and would be the most likely source of an accidental nuclear war,” and he says the ICBM system is “‘destabilizing’ in that it invites an attack from another power.”

All these critics point to these same fundamental failures and risks of ICBMs: they are redundant; they turn their sitting duck locations in five states into national sacrifice zones; and they robotize military commanders by pushing them to launch “on warning” without knowing whether the warning signals are misreads, mistakes or miscalculations.

Still, the mainstream critiques of the new missile program have ignored the scandals that have rocked the Air Force over the last 15 years[3] resulting in hundreds of demotions, firings, courts martial and forced retirements. Officers among the 9,600 people in the Minuteman III missile system have been punished for sexual assaults, spousal abuse, distributing illegal drugs, violating safety and security rules, failing and/or cheating on exams, sleeping at the controls, and even illegally flying nuclear-armed Cruise missiles cross country. In 2014, the AP referred to, “a flagging sense of purpose”, “stunning breakdowns in discipline, training, morale, security, leadership”, and “a decrepit Minuteman III missile force that few airmen want to join and even fewer view as a career-enhancing mission.”[4]

Missile field duty is understood by those assigned to it as a career cul-de-sac, plagued by years of isolation and boredom in rural outbacks, and haunted by high-level discussions of eliminating the missiles. Lacking a mission beyond sitting in place at attention or rehearsing doomsday drills, and overshadowed for promotion and commendations by warzone colleagues in Iraq, Afghanistan, Syria and elsewhere, missile crews can feel left behind. The variety and depth of staff scandals in the missile fields appears to demonstrate a broad-based disillusionment.

In 2007, three full Colonels, a Lt. Colonel and dozens of low-level personnel at Minot AFB in North Dakota were demoted or sacked after they allowed the fantastically dangerous loading and cross-country air transport of six nuclear-armed Cruise missiles.[5] The nuclear weapons, each holding up to ten times the force of the Hiroshima bomb[6] were flown 1,542 miles from Minot to Barksdale AFB in Louisiana the US staging area for its Middle East wars and an operational bomber base with 44 B-52s.

In 2008, three of the four on-duty Air Force missileers in a Minot missile launch center fell asleep at the con­trols of a com­po­nent that holds launch codes. Rules require at least two crewmembers to stay awake while on alert. They were im­me­di­ate­ly barred from missile duty and were later dis­charged from the ser­vice.[7]

In October 2010, a computer glitch knocked fifty Minuteman missiles offline at F.E. Warren AFB in Wyoming “for longer than an hour.” Five launch control centers lost all contact with the fifty far-off Minuteman III missiles they normally control. Most unintentionally, the Air Force’s response to the temporary disarmament demonstrated the missile system’s obsolete and useless status. Retired Air Force Lt. Gen. Dirk Jameson told press that the electronic shutdown had “no real bearing on the capabilities of our nuclear forces.”

In 2013, Air Force missileers, two at Minot and two at Malmstrom AFB in Montana, were reprimanded for leaving blast doors open at missile launch control centers in violation of strict protocols. The lapses were described by former missileer Bruce Blair as having enabled potential saboteurs to access super-secret missile launch codes. Understandably, the blunders were attributed to a lackadaisical mindset among the missileers.

In 2014, two missile launch crew administrators at Malmstrom were accused of operating an illegal narcotics distribution system across six Air Force bases, allegedly sending messages to eleven others, three of whom were members of launch control crews. According to Lt. Gen. James Holmes’ 268-page report on the scandal, the messages mentioned “specific, illegal drug use … [including] synthetic drugs, ecstasy and amphetamines.”[8]

Separately, Gen. Holmes’ investigation uncovered widespread cheating by missileers on launch procedure exams. Consequently, a total of 92 missileers at Malmstrom’s 341st Missile Wing were suspended, decertified, and barred from launch control duty. A total of nine missile field Colonels and Lt. Colonels at Malmstrom, nearly the entire chain of command, was removed from duty for failing to detect the mass cheating.

How do the ICBMS survive the corruption, accidents, “stunning breakdowns,” and high-level condemnation? One answer is in a February 9 report by William Hartung of the Center for International Policy, titled “Inside the ICBM Lobby: Special Interests or the National Interest?” Hartung details the huge sums lavished by weapons contractors on lobbying and campaign contributions in order to buy votes from lawmakers in states that host the missiles, air bases, or the contractors themselves (Montana, North Dakota, Colorado, Nebraska, and Wyoming), even though, as the report notes, there is “no militarily sound reason to build a new ICBM.” The report says that Northrop Grumman and its major subcontractors have given $1.2 million to the current members of the Senate missile coalition since 2012 and over $15 million more to members of key Congressional committees that help determine how much is to be spent. In addition, the top eleven contractors working on the new missile spent over $119 million on lobbying in 2019 and 2020, and employed 410 lobbyists.

How can the weapons industry seem to smash or buy off everything standing in its way, whether it’s reason, precaution, or spending limits? Part of the answer is in Mussolini’s definition of fascism as the merger of state and corporate power, and in Eisenhower’s farewell warning against the same.