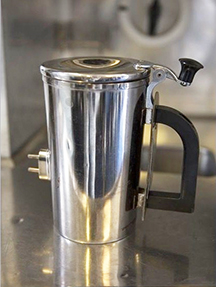 The US Air Force has been using metal cups that cost taxpayers $1,280 each. Senator Chuck Grassley, R-Iowa, wrote to Air Force Secretary Heather Wilson asking about the pricey “hot cups” that come with a plug-in heat element but have handles that keep breaking off. Sen. Grassley heard that the service was being charged more than $1,200 apiece to replace broken cups. “How many cups have been purchased by the Air Force during this time frame and what is the total cost of these purchases?” Secretary Wilson replied Oct 17, writing: “The item [cup] in question is a specially manufactured electronic water heater that plugs into aircraft systems…. The Air Force has purchased 391 of these items since 2016 at a total cost of $326,785.” Sec. Wilson’s letter admitted that Grassley was “right to be concerned about the high costs of spare parts.” Dan Grazier, at the Project on Government Oversight, told Air Force Times that the exorbitant spending on coffee cups is just the latest example. “Right now we’re talking about $1,200 on a coffee mug and two weeks ago we were talking about $10,000 toilet seat covers, and it just adds up,” he said.