Amidst heightened nuclear tension between NATO and Russia in Europe, U.S. peace activist John LaForge entered a German prison on January 10, 2023 to serve jail time there for protests against U.S. nuclear weapons stockpiled at Germany’s Büchel Air Force Base, 80 miles southeast of Cologne. LaForge entered JVA Billwerder in Hamburg as the first American ever imprisoned for a nuclear weapons protest in Germany.

The 66-year-old Minnesota native and co-director of Nukewatch, the Wisconsin-based advocacy and action group, was convicted of trespass in Cochem District Court for joining in two “go-in” actions at the German airbase in 2018. One of the actions involved entering the base and climbing atop a bunker that likely housed some of the approximately twenty U.S. B61 thermonuclear gravity bombs stationed there.
Germany’s Regional Court in Koblenz affirmed his conviction and lowered the penalty from €1,500 to €600 ($619) or 50 “daily rates”, which translates to 50 days incarceration. LaForge has refused to pay* and has appealed the convictions to Germany’s Constitutional Court in Karlsruhe, the country’s highest, which has not yet ruled in the case.

In the appeal, LaForge argues that both the District Court in Cochem and the Regional Court in Koblenz erred by refusing to consider his defense of “crime prevention,” thereby violating his right to present a defense.

Before entering prison, LaForge said: “U.S. and German Air Force plans and preparations, currently ongoing, to use the nuclear weapons stationed here in Germany are a criminal conspiracy to commit massacres with radiation and firestorms. The court authorities in this case have prosecuted the wrong suspects.”

Both courts ruled against hearing from expert witnesses who had volunteered to explain the international treaties that prohibit any planning for mass destruction. In addition, the appeal argues, Germany’s stationing of the U.S. nuclear weapons is a violation of the Treaty on the Nonproliferation of Nuclear Weapons (NPT), which explicitly forbids any transfer of nuclear weapons between countries that are parties to the treaty, including both the U.S. and Germany.

(note that it takes two weeks for mail to arrive from the U.S.) 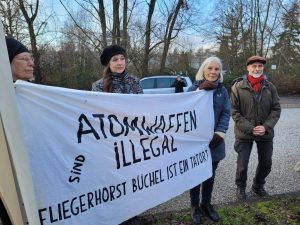