The Washington Post reported December 5 that, “The Pentagon buried an internal study that exposed $125 billion in administrative waste in its business operations amid fears Congress would use the findings as an excuse to slash the defense budget.” 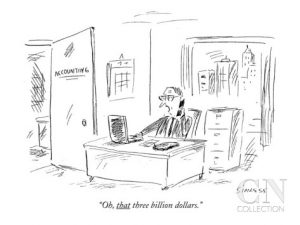 News of the $125 billion in Pentagon waste and allegations of its attempted cover-up should be welcomed by President elect Trump, who said he would pay for a $500 billion increase in military spending using a “full audit” at the Pentagon, cutting redundant bureaucracy and unwanted programs. Although Mr. Trump is now waffling on campaign promises to “lock her up,” “build a wall,” “get rid of ‘Obama care,’” and “bring back waterboarding and a hell of a lot worse,” he also promised to “eliminate waste and budget gimmicks” in the federal budget.

The Post’s report of waste and accounting fraud comes on the heels of a June 2016 military Inspector General’s report which said the Army made $2.8 billion in wrongful adjustments to accounting entries in one quarter alone in 2015, and $6.5 billion for the year. “Yet the Army lacked receipts and invoices to support those numbers or simply made them up,” Reuters reported. The Pentagon’s 2016 fiscal year budget was $573 billion—more than half of the total federal budget appropriated by Congress.

The Post notes that the newest investigation “identified ‘a clear path’ for the Department of Defense to save $125 billion over five years,” but was met with disdain by high-ranking officers. The Post reported, “Some Pentagon leaders said they fretted that by spotlighting so much waste, the study would undermine their repeated public assertions that years of budget austerity had left the armed forces starved of funds.”

Saving the $125 billion could be done, the Pentagon report’s authors said, without job losses, through attrition, early retirement, and by reigning in the most high-priced military contractors, like Lockheed Martin (with $29 billion in weapons deals), United Technologies ($6.6 billion), Boeing ($15 billion), Northrup Grumman ($9.5 billion), Raytheon ($12 billion), and General Dynamics ($12 billion).

Trump’s speeches about “US military decline” will help Congress keep these giant weapons dealers well funded, but should not fool the public. The 2017 military budget of $768 billion is four times China’s $190 billion, and 14 times Russia’s $53.02 billion; it is bigger than the nine next biggest military budgets combined.

In November 2013, a Reuters investigation found that since 1996, a staggering $8.5 trillion (with a ‘t’!) in Pentagon spending had never been accounted for. The report explained that the military regularly uses a budget gimmick of entering false and sometimes completely made-up numbers called “plugs” into ledgers in order to hide lost or missing data. In fiscal year 2012 alone, the military reported $9.22 billion in such faked “plugs.” This was up from $7.41 billion in 2011 fakery the president-elect promises to root out.

This Reuters’ report on waste, fraud and abuse in the Pentagon came after the little-remembered admission made by Secretary of Defense Donald Rumsfeld on September 10, 2001. In a shocking speech that was buried in the aftermath of 9/11, Rumsfeld said, “According to some estimates, we cannot track 2.3 trillion dollars in transactions.” He decried the accounting mess as “monumental” and “terrifying.”

Sadly, the billionaires and generals appointed by Trump to oversee the treasury and the military budget cannot be expected to tear into the Pentagon’s monumental, terrifying, and unaccountable transfer of federal taxes to the shareholders of the weapons contractors. After all, they themselves are major shareholders.