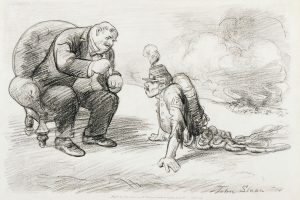 “After the War a Medal and Maybe a Job.” Cartoon by John French Sloan, 1914

It gets harder to commemorate World War I, because of time and the public’s embrace of or indifference to a permanent war economy.

About the Great War British novelist H.G. Wells wrote on August 14, 1914, “This is already the vastest war in history. … For this is now a war for peace. It aims straight at disarmament. It aims at a settlement that shall stop this sort of thing for ever. Every soldier who fights against Germany now is a crusader against war. This, the greatest of all wars, is not just another war — it is the last war!”

Optimists said it would be short. Instead, it was the worst bloodbath to date with an estimated 16 to 37 million dead. Combat and other acts of war killed at least 7 million civilians and over 10 million military personnel, while diseases, hunger, pogroms and targeted genocide killed millions more. Rather than “for ever” stopping war, the unprecedented wartime profiteering and victor’s imposition of vengeful reparations the set the stage for World War II’s 70 million fatalities, and the nearly continuous string of money-making legalized murder that has continued since. One low estimate is that since “war to end all war,” about 100 million people have died in war zones.

Armistice Day was established in 1919 to revere the peace, and to remember and commemorate WW I’s the suffering, horror, fear, pain, and loss. In 1918, the headlines roared: “Armistice Signed, End of the War!” and Armistice Day was grounded in the near universal revulsion against war’s dreadful costs, futility, graft, pointlessness and particularly against the corruptions of the politicians who prolonged the conflict. Today’s US governments all spend hundreds of billions on weapons production jobs that our xenophobic fearmongering and its consequent wars sustain. As long as US allies keep trading their oil and cash for US guns, even barbaric, medieval dictatorships like Saudi Arabia (which has beheaded 600 prison convicts since 2014) are coddled, pampered, guided and supplied militarily in its ghastly war of deliberately induced pandemics and malnutrition against Yemen.

In September 2014, on a visit to Italy’s largest military cemetery the Pope warned of a “piecemeal” World War III that may have already begun — with dozens of ongoing, undeclared wars, official crimes, state-sponsored fighter jet and drone attacks, and specialized commando raids the world over. A short list of current warring includes US combat in Iraq, Afghanistan, Pakistan, Syria, Yemen, and Somalia; civil wars in Nigeria, Maghreb, Libya, and South Sudan; and the Mexican drug war. Pope Francis said about all this, “Even today, after the second failure of another world war, perhaps one can speak of a third war, one fought piecemeal, with crimes, massacres, and destruction.” 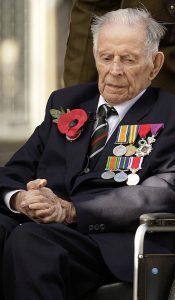 “Politicians who took us to war should have been given the guns and told to settle their differences themselves, instead of organizing nothing better than legalized mass murder.” — Harry Patch, pictured, the last surviving soldier of World War I, 2007. Photo: Shaun Curry/AFP/Getty Images.

In 1954, Armistice Day was replaced with Veterans Day, and so our public celebration of peace and an end to war became a rally to “support the troops,” a state and federal day off, and a platform for military recruitment. Not everyone was pleased. The novelist Kurt Vonnegut, a World War II veteran and POW, later wrote, “Armistice Day has become Veterans’ Day. Armistice Day was sacred. Veterans’ Day is not. So I will throw Veterans’ Day over my shoulder. Armistice Day I will keep. I don’t want to throw away any sacred things.”

Two critics of World War I come to mind. Montana Congresswoman Jannette Rankin said, “You can no more win a war than win an earthquake,” and in his statement during his Court Martial in 1918, Max Plowman said: “I am resigning my commission because I no longer believe that war can end war. War is a disorder, and disorder cannot breed order. Doing evil that good may come is apparent folly.”   — John LaForge.

This was written for the Duluth Reader Weekly,