Why do Congressional representatives, TV pundits, FOX and CNN promote nuclear power? Its industrial lobby — the Nuclear Energy Institute, and others — spent $645 million over 10 years lobbying Capitol Hill, and another $63 million in campaign contributions, as American University researcher Judy Pasternak and her students have documented. Between 1999 and 2008, over $64 million annually went to successfully manufacture the “fact” that nuclear power is “carbon free” and can help fend off climate chaos.

Independent scientists and researchers like Arjun Makhijani, President of the Institute for Environmental and Energy Research (IEER), Amory Lovins, President of Rocky Mountain Institute, and economists like Jeremy Rifkin disagree. They have all demonstrated how a nuclear “renaissance” — to replace the 440 old reactors now rattling apart worldwide, and get to a total of 1,600 needed for a minimum impact on climate change — would require that we build three new units every 30 days for 40 years.

The impossibility of such a reactor-building blitz is evident all around us. Vermont Yankee, Kewaunee in Wisconsin, and San Onofre in California are all shuttered for dismantling long before their licenses expired. UniStar Nuclear Energy has cancelled a bid to build a third reactor at its Nine Mile Point station near Oswego, New York, on Lake Ontario. The reason? “The company told the NRC it was because Nine Mile Point 3 was not selected for federal loan guarantees,” said Tim Judson of Nuclear Information and Resource Service.

TXU, Inc., owners of the Comanche Peak station 40 miles southwest of Fort Worth, just announced the cancellation of their planned expansion. TXU had asked the NRC for a license to double the number of reactors there from two to four. But as University of Texas engineering professor Ross Baldick told the Dallas Morning News, “Currently, it’s just not competitive with gas. Nuclear’s capital costs are so high you can’t win on it.”

Switzerland will phase out all five of its reactors by 2034 and Germany, which decided on a phase-out not long after Chernobyl in 1986, moved up its schedule and will mothball its 17 reactors by 2022. Italy has renewed its pre-Fukushima promise to go nuclear-free, and Taiwan is on the verge of a phase-out announcement. Venezuela and Israel have both decided against nuclear reactor plans. Israeli Prime Minister Benjamin Netanyahu told CNN in 2011, “I think we’ll skip the nuclear.”

Scientific American reported last year that Bill Johnson, CEO of Progress Energy, one of the nuclear utilities filing for a construction license but with no plans to actually build a reactor in the near future, said in 2012, “Nuclear can’t compete today.”

Forbes reported in 2012 that John Rowe, the recently retired CEO of Exelon Corporation — which owns 22 reactors, more than any other utility in the US — said, “… let me also state unequivocally that new ones [reactors] don’t make any sense right now…. It just isn’t economic, and it’s not economic within a foreseeable time frame.”

Four years before Fukushima, Jeffrey Immelt, CEO of the most powerful reactor builder and nuclear advocate in the country — General Electric — said to the Financial Times, “If you were a utility CEO and looked at your world today, you would just do gas and wind. … You would never do nuclear. The economics are overwhelming.”

Two years ago, Siemens Corporation, Europe’s largest engineering conglomerate, announced that it would stop building reactors anywhere in the world.

The firm built all 17 of Germany’s commercial reactors and was the first giant company to announce its departure from the nuclear roulette game. 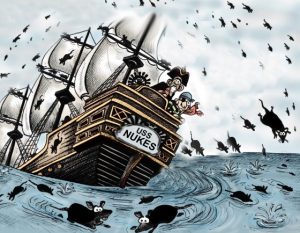 In June 2012, Germany’s gas and electricity behemoth RWE — with 72,000 employees and 17 million customers — announced that it too was quitting the reactor biz altogether. Instead, it would be investing in solar power. Until then RWE, the largest utility in Germany, had been one of the world’s most vehement defenders of nuclear power.

Today, Fukushima-Daiichi is costing its owners and the Japanese government at least $150 billion and its on-going radiation geyser is tainting the whole of the Pacific Ocean. Consequently, real players in big electric generation sound overtly anti-nuclear.

Unlike Congressional Representatives feeding at the lobbyst’s trough, or commercial television executives who feast off the industry’s advertising budgets, Wall Street is not buying into potential radiation gushers. Major investors might have closed their check books permanently after World Bank President Jim Yong Kim said Nov. 27, “The World Bank Group does not engage in providing support for nuclear power. … we don’t do nuclear energy.”

Major utility investors must smirk at the snake oil sloganeering about “safe new reactor designs” spouted in hoax documentaries like “Pandora’s Promise” — recently aired on CNN. They remember the wildly exaggerated, optimistic public promises made at the beginning of the nuclear age. In 1945, author David Dietz wrote that our cars, “will travel for a year on a pellet of atomic energy the size of a vitamin pill … The day is gone when nations will fight for oil…” Lewis Strauss, Chair of the Atomic Energy Commission, would become famous for saying in 1954, “our children will enjoy in their homes electrical energy too cheap to meter.”

It turns out, as Arjun Makhijani of IEER has documented in The Nuclear Power Deception, “Commercial nuclear power from new nuclear reactors has become the most expensive form of commonly used baseload electric power in the United States.” — JL