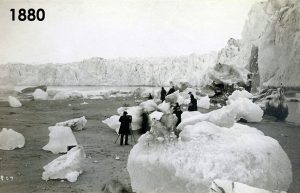 The Muir Glacier, in Glacier Bay National Park in Alaska, has undergone well documented and very rapid retreat. According to Wikipedia, from 1892 to about 1980, it retreated nearly 20 miles; and from 1941 to 2004, it retreated over 7.5 miles and thinned by over 800 meters or 2,600 feet. Ocean water has filled the valley, replaced the ice, and created Muir Inlet at right. Photos by United States Geological Survey.

From the South and North Poles, to the deepest ocean trenches, human-made radioactive material is being discovered in new places. Two recent studies reveal the distances that radioactive effluent and fallout have been dispersed. One international research team found radioactivity in all 17 glaciers they tested in both of the Earth’s hemispheres.

Another global study found the first evidence of fallout from bomb tests in marine life in the deepest place on Earth. With unabated production of radioactive waste, runoff, gases, and accidents, it’s no surprise to find it farther away and deeper than ever.

The first study found measured amounts of radioactive cesium-137 and americium-241 in glacial sediments thousands of times greater than expected. “Our samples are exceptional in terms of the levels of fallout radionuclides that we find outside of nuclear exclusion zones” (contaminated “no-go” areas), said Caroline Clason, a member of the study team and a lecturer in Physical Geography at the Univ. of  Plymouth, UK. “We’re talking about weapons testing from the 1950s and 1960s onwards, going right back in the development of the bomb,” Clason told Agence France-Presse. “If we take a sediment core you can see a clear spike where Chernobyl was [in April 1986], but you can also see quite a defined spike in around 1963 when there was a period of quite heavy weapons testing.” While most of the fallout from Fukushima has yet to return to land, evidence is already appearing.

After an accident or explosion, radioactive particles travel through the atmosphere and fall to Earth as radioactive rain or snow. Radioactive particles in snow fall on glaciers settling into the temporarily stable environment. However, Clason warned, “we all know that glaciers are increasingly melting and that material has to go somewhere.” The study did reveal some good news: the unique glacial sediment where radioactive particles settle is very efficient at accumulating those contaminants and may provide opportunities for bioremediation.

As radioactive glacial sediments enter the ocean, it will affect marine life which has already been doused with radioactivity. That is the subject of “Penetration of Bomb Carbon-14 into the Deepest Ocean Trench,” published in April by the American Geophysical Union (AGU). (If carbon-14 sounds familiar, you may remember that it is used to determine the age of geological samples using carbon dating.) An AGU news release explains, “Thermonuclear weapons tests conducted during the 1950s and 1960s doubled the amount of carbon-14 in the atmosphere when neutrons released from the bombs reacted with nitrogen in the air.” Bomb test carbon has been recorded in marine life at the ocean’s surface since the late 1950s. As these animals die and fall to the ocean floor, deep sea crustaceans as far as seven miles (11 kilometers) below the surface of the Pacific Ocean in the Mariana Trench, feed on their remains and the radioactivity is passed through the food web. “However, the penetration of bomb [test] carbon-14 into the deepest fauna has not been reported until now,” the study said.

The amount of human-made radioactivity moving into the Pacific is mushrooming. New concern is being raised by the United Nations Secretary-General António Guterres over a leaking concrete dome built in the Marshall Islands. The concrete covers a large volume of radioactive debris that was collected from the detonation of 67 bomb tests done by the US, contaminating the islands and their people. Radioactive materials from the testing were pushed into an unlined pit and capped with the concrete. Mr. Guterres recently visited the islands, amplifying the voices of Marshall Islanders worried about radioactivity leaching into the ocean through the bottom of the hole, and the increasing potential for damage to the concrete dome by tropical storms.

From the depths of the oceans to the polar regions, more areas are being impacted by the radioactive legacy of humans, impacts accelerated with climate change which itself is rapidly accelerating.