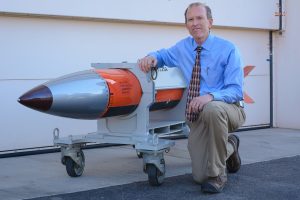 While much of the world pursues the abolition of nuclear weapons — embraced by the adoption July 7 by 122 nations of the Treaty on the Prohibition of Nuclear Weapons — the militarized Trump White House is pursuing plans for a trillion-dollar rebuild of the entire US nuclear weapons complex. The enormous, extravagant program is designed to produce 80 new nuclear warheads every year, including three new warhead types, a new $20 billion nuclear-armed Long Range Standoff (LRSO) weapon, a new $12 billion B61 nuclear gravity bomb, a new fleet of nuclear-armed submarines, and a new $100 billion intercontinental ballistic missile (ICBM) system.

As WallStreet.com online reported recently, “A review by the Arms Control Association, a nonpartisan, nuclear weapons watchdog, [found] the total 30-year cost of the program could rise to $1.5 trillion” — $500 billion beyond what the Obama Administration first proposed in 2016. Beyond the colossal expense, the program appears to be a flagrant violation of the Nuclear Non-Proliferation treaty.

On Aug. 8, the militarized Energy Dept. and US Air Force conducted two tests of the new “B61-12” gravity bomb at Nevada’s Tonopah Test Range. The unarmed bomb test — using an F-15E jet fighter, currently employed in wars in Iraq, Afghanistan, Syria, and Libya — demonstrated the jet’s ability to wage nuclear war. The B61-12 program “is progressing on schedule,” said Phil Calbos, the Acting Deputy Administrator of the National Nuclear Security Administration. NNSA builds and maintains US nuclear warheads. Although NNSA is nominally a civilian agency, Mr. Calbos graduated from West Point and studied at the Pentagon’ National War College.

The B61-12 bomb test involved new “tailfin” hardware designed by Boeing Corp. NNSA wants the first B61-12s to be finished in 2022 and to ship 180 of them to five “nuclear sharing” NATO partners in Europe — replacing the ones already there. Critical German, Dutch, and Belgian politicians have called for the permanent removal of all US nuclear weapons, and the Air Force itself may soon remove its B61s from Turkey. Another 400 to 600 of the new B61s are set to be built to replace those now used on long-range Air Force B-52 and B-1 bombers.

The Air Force also granted $349 million in contracts to Boeing, and $329 to Northrop Grumman in August, and put the two giant weapons contractors into competition to replace today’s arsenal of 450 Minuteman III ICBMs. Popular Mechanics reports that “Northrop Grumman and Boeing each have been awarded just under $350 million to churn out Technology Maturation and Risk Reduction studies before the Air Force picks a single winner.” One of the two can expect to win the plum $100 billion contract to build the new ICBMs, dubbed Ground Based Strategic Deterrent.

This push for a replacement ICBM flies in the face of authoritative calls for their abolition. In January 2015, General/Secretary Mattis told the Senate Armed Services Committee, “You should ask, ‘Is it time to reduce the triad … removing the land-based missiles?’”  Speaking Dec. 3, 2015, former Defense Secretary William Perry called for retiring land-based missiles altogether saying, “ICBMs aren’t necessary … they’re not needed. Any reasonable definition of deterrence will not require that third leg.” (Other “legs” are submarines and long-range bombers.) Sec. Perry’s commentaries in the New York Times and the Washington Post last year were titled respectively, “Why It’s Safe to Scrap America’s ICBMs,” and “Mr. President, kill the new Cruise missile” (the LRSO).

Additionally, a blue-ribbon commission chaired in 2012 by Gen. James Cartwright, a former Vice Chairman of the Joint Chiefs of Staff, called for eliminating the ICBM system, not replacing it. At a Senate hearing later in 2012, Gen. Cartwright testified that the ICBMs could be scrapped without leaving the US at risk. Cartwright’s commission report was signed by then Senator and soon-to-be Defense Secretary Chuck Hagel, and recommended a US nuclear arsenal with none left on ICBMs.

Congressional pleas for austerity, fiscal responsibility, and budget cutting should be lampooned and rejected unless the $ trillion-plus nuclear weapons plan — prohibited now by the Non-Proliferation Treaty and soon by the Nuclear Weapon Treaty Ban — is zeroed out first.