By the Nuclear Resister 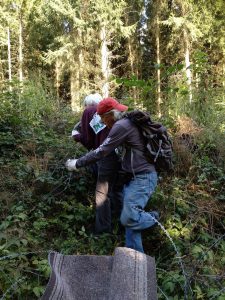 Three more Europeans have gone to prison in Germany this year for their protests inside the Büchel Air Base, where US nuclear weapons are deployed. They are the 27th, 28th, and 29th resisters to choose prison over payment of fines during the long campaign to send those nukes back home. COVID had delayed the imposition of their sentences.

In May, Ria Makein, 70, surrendered to serve 30 days for her April 2019 arrest. She chose prison because she wanted to “continue our campaign.” Asked after her release what gave her the strength “to swim against the tide,” she replied, “Through all the mail I received during those four weeks, I became aware of this great network.”

Holger-Isabelle Jänicke lost his appeal for taking part in an April 2019 action at Büchel and began serving his 30-day sentence in mid-August. Jänicke, a legal aid worker, dedicated his arrest to the late Fr. Carl Kabat, noting that, “In 1983, he also took part in the ploughshares campaign in Schwäbisch Gmünd, Germany in which a tractor for the Pershing II [nuclear missile] was damaged. From 1987 to 1995, I lived in Mutlangen in a community of peace workers. We named our house after Carl Kabat.”

Next in lockup for actions at Büchel may well be US activist John LaForge, who has refused to pay and has been ordered to serve 50 days in a German prison starting Jan. 10, 2023. Last spring, following his convictions in district and appeal courts for twice entering the base in 2018, LaForge appealed to the Constitutional Court. However, in Germany, imposition of sentence is separate from the legal appeal. The appeal argues that two lower courts erred by refusing to consider his defense of “crime prevention,” thus violating his right to present a defense. LaForge argues that Germany’s stationing of US nuclear weapons is a criminal violation of the 1970 Non-Proliferation Treaty, which forbids transferring nuclear weapons to other countries. He also asserts that attempting to stop their use is not unlawful but a justified act to prevent the crime of threatening vast, disproportionate, and indiscriminate destruction from the US nuclear weapons.

While LaForge may become the first US activist to be jailed in Germany for protesting the US nuclear weapons there (Kabat having been released on his own recognizance and never returning to Germany for trial), at least two more Americans, both Catholic Workers who have joined the international protests at Büchel, could follow him into prison next year if they refuse to pay.

Susan Crane from Redwood City, California was convicted on January 18 on four counts of trespass from 2019. Once again, the Cochem court rejected her defenses of international law and competing harms, instead focusing for the record on the cost of hardware to repair the fence she’d helped to cut through. On September 20 Crane was retried in Koblenz Regional Court, contesting the trial court’s refusal to consider her defenses to the four 2019

While vigiling at Büchel in July for this summer’s international week of protest, Brian Terrell from Maloy, Iowa was served papers to appear in court on November 23 for the appeal of his conviction from a 2019 fence-cutting action there. He is weighing his options.

A final update: Uwe Lutz-Scholten was summoned to court in his hometown of Korbach, a three-hour drive from Büchel, on September 8, charged with inciting an illegal act. His name was on the website for the July 2021 “Digging for Life” action at Büchel as manager of the solidarity account to support the activists who were arrested.

Last winter the prosecutor discontinued the investigation of those arrested at the scene. Lutz-Scholten, drew a young judge who expressed interest in the issues, admitting she didn’t know anything about them before the trial but had learned a lot in preparation. She allowed him to speak at length about the consequences of nuclear war and the weapons stockpiled at Büchel, and at the end simply terminated the proceedings with no judgment or penalty.

—Felice & Jack Cohen-Joppa, editors of The Nuclear Resister in Tucson, Arizona, where this article first appeared, gave us permission to reprint.