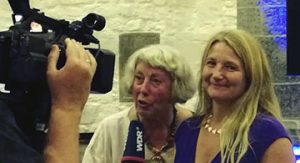 For their “persistent protest against nuclear weapons at the Büchel Air Base,” Germany’s prestigious Aachen Peace Prize has been awarded jointly to Marion Küpker (at right in photo) and Elke Koller, and to the organizations they represent. Küpker is the international coordinator of DFG-VK, the German Peace Society, and spokesperson for the “Büchel is Everywhere!” campaign. Koller coordinates the group “Initiative Circle Against Nuclear Weapons.” Küpker, who also coordinates Nonviolent Action for Abolition of Nuclear Weapons which targets the Büchel base, wrote to friends when she heard the news, “I thank all those who have been in Büchel. This prize belongs to all of us!” Küpker’s organizing advocates creative nonviolent civil resistance, and Koller’s group uses more conventional public education. The annual prize comes with a grant of €2,000 ($2,200) and is announced every May 8th, which is celebrated in Germany as “Liberation from Fascism Day.” The award ceremony took place September 1st, the day German trade unions nationwide celebrate as “Anti-War Day.”