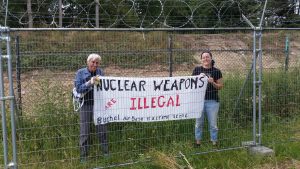 A long-time U.S. peace activist was found guilty of four counts of trespassing January 17 in Cochem, Germany, charges that stemmed from multiple protests against the stationing of U.S. nuclear weapons at Germany’s Büchel Air Force Base* in the west-central state of Rhineland-Pfalz.

Susan Crane, a member of the Redwood City, California Catholic Worker House and a Plowshares disarmament activist, was tried by District Judge Alexander Fleckenstein who imposed a fine of 1,000 Euros or 200 days in jail. The sentence was heavier than in recent related protest cases, the judge explained, because Crane showed no remorse for joining several “go-in” actions involving entry into the base.

In her testimony, Crane said in part, “The four actions I was part of in 2019 were an attempt to stop an ongoing crime: the criminal planning and preparation of attacks with US nuclear weapons at Büchel air base. This unlawful planning and preparation is criminal under international humanitarian laws, treaties and agreements because it violates the Hague Conventions, the Geneva Conventions, the Nuremberg Principles, and the Treaty on the Nonproliferation of Nuclear Weapons, which Germany and the United States are obligated to uphold under federal constitutions.”

In his ruling, Judge Fleckenstein said that international laws regarding nuclear weapons didn’t apply in his court, and instead focused on the cost of nuts and bolts used to repair openings in the chain link fence. Frits ter Kuile of the Amsterdam Catholic Worker who attended the trial was alarmed by the focus of the Court, saying, “Susan was talking from the heart about the big picture of lawful responsibility, and the death of the planet, and the judge talked about 30-cent bolts.”

In a written declaration submitted on behalf of Crane, legal scholar Anabel Dwyer of Ann Arbor, Michigan wrote that Crane, “correctly asserts that the charges should be withdrawn” because “all citizens … have a duty to nonviolently or symbolically resist complicity with the violations of the intransgressible principles of international customary law that the ongoing threatened use of those nuclear bombs constitute.” Crane’s attorney Milan Martin of Frankfurt urged the judge to allow the declaration into evidence, explaining that the principle of “competing harms” excuses minor offenses done in order to prevent greater crimes. Because Crane’s actions were nonviolent attempts at crime prevention, she must be acquitted, Martin said. The judge ruled that the declaration could not be submitted as evidence. Crane said she would appeal the conviction, “in hope that the higher court would consider the international humanitarian law which holds the US weapons illegal.”

In September 2021, Crane was in the same courtroom and was convicted of two similar charges and sentenced to a fine or 50 days in jail. Crane was a part of delegations of US peace activists to Germany organized by Nukewatch in 2017, 2018, 2019, and 2021.

The Büchel air base maintains at least 20 U.S. hydrogen bombs known as B61-3s and B61-4s, which are managed there by the U.S. Air Force’s 702nd Munitions Support Squadron. German Tornado fighter jet pilots train to overfly Poland and attack Russia, a mere 1,000 miles to the east, using the US bombs. The US B61s are also stationed in The Netherlands, Belgium, Italy and Turkey, all in range of the Russian Federation using the Tornado jets that fly up to 1,490 mph.

Disarmament activists have focused on the Büchel base for 25 years demanding the ouster of the U.S. nuclear weapons and a cancellation of plans to replace today’s bombs with the new “B61-12,” now under production in the United States.

Since 1997, when the group Nonviolent Action to Abolish Nuclear Weapons (GAAA, www.gaaa.org) began a campaign of civil resistance in Büchel, at least 97 activists have been charges with “crimes” following nonviolent go-in actions.