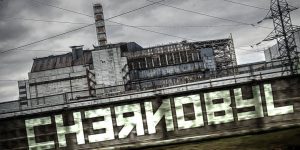 Photo: The cement tomb built in 1986 over the destroyed Chernobyl reactor No. 4 in Ukraine needed replacement by 1996. It finally got re-covered in 2016. Similar abandonment has been recommended for three wrecked General Electric reactors in Fukushima, Japan.

The radiation dispersed into the environment by the three reactor meltdowns at Fukushima-Daiichi in Japan has exceeded that of the April 26, 1986 Chernobyl catastrophe, so we may stop calling it the “second worst” nuclear power disaster in history. Total atmospheric releases from Fukushima are estimated to be between 5.6 and 8.1 times that of Chernobyl, according to the 2013 World Nuclear Industry Status Report. Professor Komei Hosokawa, who wrote the report’s Fukushima section, told London’s Channel 4 News then, “Almost every day new things happen, and there is no sign that they will control the situation in the next few months or years.”

Tokyo Electric Power Co. has estimated that about 900 peta-becquerels have spewed from Fukushima, and the updated 2016 TORCH Report estimates that Chernobyl dispersed 110 peta-becquerels.[1] (A Becquerel is one atomic disintegration per second. The “peta-becquerel” is a quadrillion, or a thousand trillion Becquerels.)

Chernobyl’s reactor No. 4 in Ukraine suffered several explosions, blew apart and burned for 40 days, sending clouds of radioactive materials high into the atmosphere, and spreading fallout across the whole of the Northern Hemisphere — depositing cesium-137 in Minnesota’s milk.[2]

The likelihood of similar or worse reactor disasters was estimated by James Asselstine of the Nuclear Regulatory Commission (NRC), who testified to Congress in 1986: “We can expect to see a core meltdown accident within the next 20 years, and it … could result in off-site releases of radiation … as large as or larger than the releases … at Chernobyl.[3] Fukushima-Daiichi came 25 years later.

Contamination of soil, vegetation and water is so widespread in Japan that evacuating all the at-risk populations could collapse the economy, much as Chernobyl did to the former Soviet Union. For this reason, the Japanese government standard for decontaminating soil there is far less stringent than the standard used in Ukraine after Chernobyl.

The Korea Atomic Energy Research (KAER) Institute outside of Seoul reported in July 2014 that Fukushima-Daiichi’s three reactor meltdowns may have emitted two to four times as much cesium-137 as the reactor catastrophe at Chernobyl.[4]

To determine its estimate of the cesium-137 that was released into the environment from Fukushima, the cesium-137 release fraction (4% to the atmosphere, 16% to the ocean) was multiplied by the cesium-137 inventory in the uranium fuel inside the three melted reactors (760 to 820 quadrillion Becquerel, or Bq), with these results:

The Fukushima-Daiichi reactors’ estimated inventory of 760 to 820 quadrillion Bq (petabecquerels) of cesium-137 used by the KAER Institute is significantly lower than the US Department of Energy’s estimate of 1,300 quadrillion Bq. It is possible the Korean institute’s estimates of radioactive releases are low.

In Chernobyl, 30 years after its explosions and fire, what the Wall St. Journal last year called “the $2.45 billion shelter implementation plan” was finally completed in November 2016. A huge metal cover was moved into place over the wreckage of the reactor and its crumbling, hastily erected cement tomb. The giant new cover is 350 feet high, and engineers say it should last 100 years — far short of the 250,000-year radiation hazard underneath.

The first cover was going to work for a century too, but by 1996 was riddled with cracks and in danger of collapsing. Designers went to work then engineering a cover-for-the-cover, and after 20 years of work, the smoking radioactive waste monstrosity of Chernobyl has a new “tin chapeau.” But with extreme weather, tornadoes, earth tremors, corrosion and radiation-induced embrittlement it could need replacing about 2,500 times. — John LaForge

[3] James K. Asselstine, Commissioner, US Nuclear Regulatory Commission, Testimony in Nuclear Reactor Safety: Hearings before the Subcommittee on Energy Conservation and Power of the Committee on Energy and Commerce, House of Representatives, May 22 and July 16, 1986, Serial No. 99-177, Washington, DC: Government Printing Office, 1987.