On Aug. 20, Tepco acknowledged that 300 tons of highly radioactive water had leaked from one of at least five of the 1,000 storage tanks it has hastily constructed to hold contaminated water (top photo, below). The waste water is generated by the continuous watering-down of extremely hot uranium fuel that has melted through the bottom of three destroyed Fukushima reactors and the hot waste fuel rods stored for decades in the now earthquake-damaged cooling pools.

Tepco also reported August 20 that measurements of radioactive tritium in seawater near reactor No. 1 are the highest ever recorded — higher than at the height of the company’s deliberate, last-resort dumping of 11,500 tons of primary reactor coolant directly into the ocean in March and April 2011.

The water is poisoned with cesium, strontium, americium, tritium and other ferociously radioactive isotopes. Tepco says it has not found the spot in the 1,000-ton steel tank from which the water was still leaking, but was transferring the water from the bad tank and removing contaminated soil.

The company estimated that the radioactivity in the 300 tons amounted to 24 trillion becquerels, or 80 million becquerels per-liter. Reuters interviewed professor emeritus Michiaki Furukawa of Nagoya University who said, “That is a huge amount of radiation. The situation is getting worse.” Hideka Morimoto, a spokesman for Japan’s Nuclear Regulation Authority, told the AP “We are extremely concerned.”

The leaking tanks were constructed with rubber seams intended to last about five years, and were bolted together rather than welded. According to Tepco, 350 of the 1000 tanks were similarly built on the cheap rather than using welded joints which are more expensive and more watertight.

Tepco’s August acknowledgement of major tank leaks came a month after the company’s belated admission that 300 tons of highly contaminated water have been pouring into the Pacific every day ever since the March 11, 2011 disaster began. These 300 tons of contaminated water per day amounts over 30 months to at least 270,000 tons of water-borne radionuclides, a hemorrhage that continues unabated.

The company admitted it has no idea where the leaks are located. On July 26, Tepco president Naomi Hirose confessed, “If you asked whether we have adequately learned the lessons of the disaster, the answer would be that we haven’t.”

The Tokyo daily Asahi Shimbun, reported last December that “A huge volume of highly radioactive water, used to cool down the fuel, has since been leaking from the reactor” and the sources of the leaks were unknown.

Disaster “out of control” — Tepco executive

Tepco executive Kazuhiko Yamashita, said Sept. 13, “I think the current situation is that it is not under control.”

Yamashita’s blunt condemnation flatly contradicted Japanese Prime Minister Shinzo Abe’s testimony to the International Olympic Committee, given a week earlier, in which the PM claimed “the situation is under control.”

The unprecedented ocean contamination stems from the colossal power of the March 11, 2011 magnitude 9.0 Great Eastern Japan Earthquake — the worst in Japanese history — and the consequent 52-foot tsunami — which smashed the six-reactor Fukushima-Daiichi compound, causing explosions and three reactor meltdowns.

The meltdowns began spewing a colossal amount of cesium, strontium, plutonium, iodine-131 and other deadly elements to the atmosphere and to the Pacific and in some respects never stopped doing so.

The bizarre phenomenon of about 400 tons of contaminated groundwater running into the reactor buildings every day is a consequence of the giant quake and its destruction of the six-reactor complex’s underground infrastructure, piping, trenches, tanks and buildings. But because the company’s system of partial decontamination only filters about 100 tons of water per day, 300 tons are running through the destroyed reactor complex and into the Pacific.

Millions of gallons of water are continuously being poured into the three wrecked reactors and into cooling pools that store tens of thousands of extremely hot and highly radioactive waste fuel rods (“spent fuel”). This cooling water along with groundwater is moving through the massive cracks, breaks and faults and spreading to the sea.

The company has announced an improved, expensive, untested “freezing” of a one-mile-long section of ground that could block the run-off, but which will not be completed until 2015. It’s also injecting a chemical solution into the coastline embankment as a “solidifying” experiment.

From bad to worse

In a front-page New York Times article September 4, Martin Fackler called the crisis a “worsening situation.” Fackler is the author of Credibility Lost: The Crisis in Japanese Newspaper Journalism After Fukushima.

Long before Tepco made its August admission, the magazines Science and Nature reported (in October 2012) that the initial dispersal of radioactivity from Fukushima — both as atmospheric fallout and direct discharges to the Pacific — represented the largest accidental release of radiation to the ocean in history — ten to 100 times more than the 1986 Chernobyl nuclear catastrophe in Ukraine. Co-authored by oceanographer Ken Buesseler, a senior scientist at the Woods Hole Oceanographic Institution in Massachusetts, the report said that contamination in fish in the area was so high that large, ongoing releases of radioactively contaminated water must be taking place. 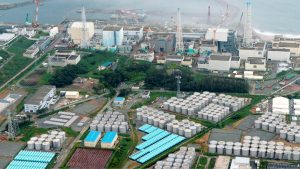 Buesseler’s allegations were denied for months by both Tepco and the Japanese government. Tepco rebuffed the information even after the chief of Japan’s federal nuclear watchdog agency said the site had probably been leaking contaminated water since the March 2011 disaster began.

Tepco’s denials and delays have been condemned by experts in harsh terms. According to the Nation August 19, Dale Klein, a past chair of the US Nuclear Regulatory Commission blasted Tepco executives, “These actions indicate that you don’t know what you are doing, and that you do not have a plan.”

Over 430,000 thousand tons of highly contaminated water is being stored in tanks at the site, as Tepco floods the reactors’ cores using an improvised system to cool the melted fuel. Water from the cooling scheme runs into basements and trenches that were cracked open by the earthquake and which have been leaking since the disaster began.

Tepco said Sept. 3 that it detected a radiation level of 2,200 millisieverts-per-hour near one storage tank — up from a previous high of 1,800 millisievert/hr on August 31. Both levels are high enough to kill an unprotected person in a few hours. Tepco’s earlier radiation estimates of 100 milliseiverts/hr were highly inaccurate because, according Dr. Arjun Makhijani speaking on PBS News Hour, monitors used for the earlier reports maxed out at 100 milliseiverts per hour.

Thousands of workers occupy the contaminated grounds doing remediation work. Tepco acknowledged in July that 11 times the number of its employees than it had earlier told the World Health Organization have been exposed to high levels of radiation. Tepco now says 10 percent of the workers are at risk of developing thyroid cancer.

With thousands of tons of contaminated water gushing from the reactors, the groundwater and from storage tanks, radioactive contamination is inexorably destroying the fishing industry in Eastern Japan. On September 5, South Korea banned all fish imports from a large area around Fukushima Prefecture. The news sent shock waves through a staggered fishing community that has already suffered several billion in losses.

Fish of all kinds are being found contaminated with cesium-137 and iodine-131 from the ongoing contamination. In 2011, the Japanese allowed 2,000 becquerels-per kilogram (bq/kg) to contaminate seafood, vegetables, dairy products and mushrooms. In April 2012, the government tightened the limit to 100 bq/kg. 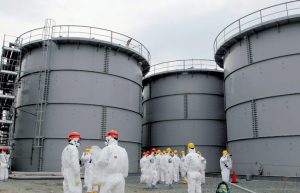 In July, sea bass caught near Hitachi, Ibaraki, 55 miles southwest of Fukushima, were found contaminated at 1,037 bq/kg — 10 times the 100 bq/kg government limit. Last year, shipments of contaminated Pacific cod were halted by the government. Black sea bream caught 60 miles north of Fukushima had 3,300 bq/kg of cesium; greeling within 12 miles of the site were found with a record 25,800 bq/kg. Indeed, all bottom-feeding or demersal fish “consistently showed the highest counts” of cesium, said Ken Buesseler in a Science article last year. The demersal include cod, conger eel, flounder, halibut, pollock rockfish, skate and sole.

Government limits on cesium poisoning allowed in food vary widely. Below in becquerels-per-kilogram, as of Dec. 27, 2011:

*Only applied to items produced within the EU. When Japanese agricultural products are imported to the EU, Japan’s provisional limits are applied. Source: http://www.japanprobe.com/2011/12/27/japans-new-limits-for-radiation-in-food-20-times-stricter-than-american-and-eu-standards/