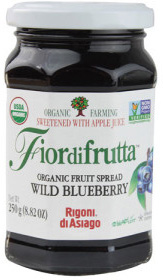 TOKYO, Japan — Multiple batches of organic Fiordifrutta Wild Blueberry jam produced in Italy have been found to contain cesium-137. Some 5,184 jars were recalled in Japan on Oct. 17. The berries were harvested in Bulgaria where the countryside is still contaminated as a result of the Chernobyl reactor disaster of 1986. The news magazine Shukan Asahi had the jam tested and discovered 164 becquerels per kilogram (Bq/kg) of cesium-137. Tokyo municipal health authorities then tested some of the jam and found 140 Bq/kg of cesium. Fiordifrutta is marketed as a high-quality, certified organic, non-GMO product.

Japan has a stricter standard for food-borne radiation than the US or Europe. Japan’s limit is 100 Bq/kg. The limit for contamination in the EU is 600 Bq/kg, and in the US it’s 1,200 Bq/kg. So, the jam will not be recalled in the US. It’s being sold by Amazon, Whole Foods and elsewhere. Nukewatch staffer Arianne Peterson picked some up in the natural food cooperative in Cumberland, Wisconsin. The office RadAlert didn’t detect any contamination, but no one has put it on their toast. — NaturalNews.com, Nov. 17; SimplyInfo, Oct. 28; Shukan Asahi, Nov. 2013