After President Donald Trump’s Sept. 23 bombast before the United Nations General Assembly, where he claimed the US might “have no choice but to totally destroy North Korea,” the North Korean regime responded quickly, calling him a “mentally deranged dotard.”

“Far from making remarks of any persuasive power that can be viewed to be helpful to defusing tension, he made unprecedented rude nonsense one has never heard from any of his predecessors,” the President Kim Jong-un said after Trump’s UN bomb threat.

In Trump’s Nov. 2017 speech to South Korea’s National Assembly, he sputtered, “I also have come here to this podential [sic] to deliver a message…” Trump’s slurred speech led the Minju Joson, a state-run newspaper published in Pyongyang, to say in an editorial that the president’s message was a “load of rubbish spouted by the old lunatic Trump” and “was all nonsense.” 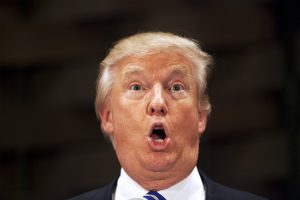 Of course the gibberish and lack of coherence in Trump’s speech was nonsense, but unprecedented in belligerence it was not. Trump’s predecessors have all been nearly as coldblooded in their overt threats against North Korea. While the oafish US president certainly speaks like a dotard, his threat to totally destroy a country of 25 million people is no more deranged than previous White House residents.

On July 12, 1993, Bill Clinton was in South Korea and warned that if the North developed and used an atomic weapon, the United States would “overwhelmingly retaliate,” adding chillingly, “It would mean the end of their country as they know it.” In 1997, a Clinton Presidential Decision Directive explicitly approved plans for “first use” of US nuclear weapons against “rogue” states.

Likewise, Barack Obama calmly threatened the North during his April 2014 visit to Seoul, saying, “We will not hesitate to use our military might to defend our allies and our way of life.” Calling the North “a pariah state that would rather starve its people than feed their hopes and dreams,” Obama alluded back to the country’s terrible 1996-1998 famine — “one of the great famines of the 20th Century” according to UN aid agencies. He conveniently neglected to recall any US responsibility for failing to provide adequate emergency food aid to the starving.

Yet jittery trepidation regarding phantom threats by North Korea is routinely, almost universally voiced — even if it’s just as routinely debunked. In 1996, the editors at the New York Times warned, “North Korea could threaten parts of Hawai‘i and Alaska” in less than 10 years. (“Star Wars, the Sequel,” May 14) Now 22 years on, the North still can’t do it. In 2000, the same editors said US intelligence agencies “predict that North Korea could have the capacity to launch a handful of nuclear-tipped long-range missiles within five years.” (“Prelude to a Missile Defense,” Dec. 19) Eighteen years later, it still can’t.

Fearmongering about North Korea always lacks any evidence that its ruling regime is suicidal, because there is no such evidence. Never explained by our military-industrial-Congressional weapons merchants, newspaper and TV pundits, or think tank analysts, is why the North would precipitate its inevitable self-destruction by attacking the United States or its allies, because it never would.

A few reporters have managed to fit this acknowledgment into their stories, and for this they need to be recognized. Jessica Durando, writing in USA Today Nov. 21, 2017, said North Korea’s leader appears “determined to keep his nuclear arsenal to deter a US attempt to overthrow him.”