Social media users accuse the media of hypocrisy in its coverage of Russia’s war on Ukraine compared with other conflicts.

As the Russian invasion of Ukraine continues … an outpouring of support for Ukrainians has been witnessed across much of Europe, Australia, and the West in general.

The war began on [Feb. 24] after Russian President Vladimir Putin ordered his forces to enter Ukraine, following months of a heavy military buildup on the border.

Ukraine’s health minister said at least 198 Ukrainians, including three children, have been killed so far during the invasion. The United Nations says more than 360,000 Ukrainians have fled the country, with the majority crossing the border into neighboring Poland. 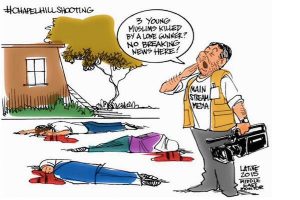 The war has triggered swift condemnation by several countries, immediate sanctions by the United States and other countries targeting Russian banks, oil refineries, and military exports, and marathon emergency talks at the UN Security Council.

On social media, the speed of such an international response — which includes the exclusion of Russia from some cultural events and treatment of it as a pariah in sports — has raised eyebrows at the lack of such a reaction to other conflicts across the world.

Media pundits, journalists, and political figures have been accused of double standards for using their outlets to not only commend Ukraine’s armed resistance to Russian troops, but also to underlying their horror at how such a conflict could happen to a “civilized” nation.

CBS News senior correspondent in Kyiv Charlie D’Agata said on [Feb. 25]: “This isn’t a place, with all due respect, like Iraq or Afghanistan that has seen conflict raging for decades. This is a relatively civilized, relatively European — I have to choose those words carefully, too — city where you wouldn’t expect that, or hope that it’s going to happen.”

His comments were met with derision and anger on social media, with many pointing out how his statements contributed to the further dehumanization of non-white, non-European people suffering under a conflict within mainstream media.

D’Agata later apologized, saying he spoke “in a way I regret.” 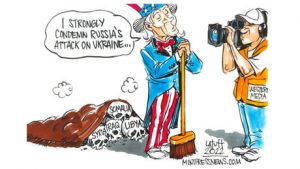 “It’s very emotional for me because I see European people with blonde hair and blue eyes being killed every day with Putin’s missiles and his helicopters and his rockets,” Sakvarelidze said.

The BBC presenter responded: “I understand and of course respect the emotion.”

On [Feb. 27], Al Jazeera English presenter Peter Dobbie described Ukrainians fleeing the war as “prosperous, middle class people” who “are not obviously refugees trying to get away from areas in the Middle East that are still in a big state of war; these are not people trying to get away from areas in North Africa, they look like any European family that you would live next door to.”

The media network later issued an apology, saying the comments “were inappropriate, insensitive, and irresponsible.”

“Al Jazeera English is committed to impartiality, diversity and professionalism in all its work. This breach of that professionalism will be dealt with through disciplinary measures,” it said in a statement.

“Amazing mainstream Western media gives glowing coverage of people resisting invasion by making Molotov cocktails,” one social media user remarked. “If they were brown people in Yemen or Palestine doing the same they would be labeled terrorists deserving U.S.-Israeli or U.S.-Saudi drone bombing.”

On B.F.M. TV, France’s most-watched cable news channel, journalist Philippe Corbe said: “We’re not talking here about Syrians fleeing the bombing of the Syrian regime backed by Putin, we’re talking about Europeans leaving in cars that look like ours to save their lives.”

British journalist Daniel Hannan was criticized online for an article in The Telegraph, in which he wrote that war no longer happens in “impoverished and remote populations.”

European politicians have also expressed support for open borders towards Ukrainian refugees, using terminology such as “intellectuals” and “European” — a far cry from the fear-mongering used by governments against migrants and refugees from Africa, the Middle East and Central Asia.

Jean-Louis Bourlanges, a member of the French National Assembly, told a TV channel that the Ukrainian refugees will be “an immigration of great quality, intellectuals, one that we will be able to take advantage of.”

The Russia-Ukraine war has been billed by liberal media as Europe’s worst security crisis since the end of World War II, contributing to the general amnesia [regarding] relatively recent conflicts on the continent, such as the Bosnian war in the 1990s and the Northern Ireland conflict that lasted from the 1960s until 1998.

Absent from such generalizations was the fact that in the post-World War era, Europe exported many wars to countries that were previous colonial entities.

Some commentators have also heaped praise on the steadfastness of Ukrainians and the country’s defense capabilities, in such a way that they suggested no other nation or people have undergone such an experience before.

Critics pointed out the hypocrisy of crowd-sourcing and setting up online donations to fund Kyiv’s military without facing any government backlash or suspension of their monetary accounts.

The double standards regarding calls for excluding Russia from cultural and sporting events and not extending the same move to other occupying entities have not been lost on social media either.

Examples were drawn between the Palestinian Boycott, Divestment and Sanctions (BDS) movement against Israel — often touted by Western governments as anti-Semitic — and the current exclusion of Moscow from events such as the Eurovision contest and stripping of the Champions League final from St. Petersburg.

Australian Prime Minister Scott Morrison has backed the boycott of Russia from sports, but criticized the boycott of last month’s Sydney Cultural Festival over receiving sponsorship from the Israeli embassy.

Claudia Webbe, a British member of parliament, tweeted that the people who genuinely care about Ukrainians are the ones who will welcome all refugees with open arms.

— Al Jazeera Arabic was the first independent news service in the Arab world dedicated to comprehensive news and live debate. Al Jazeera English was launched in 2006.