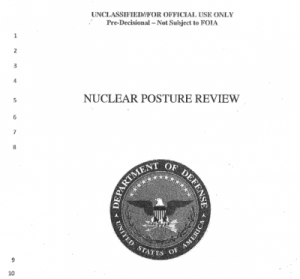 On Jan. 11, the Huffington Post posted a leaked draft of the Trump Administration’s Nuclear Posture Review, the government’s most detailed unclassified nuclear weapons and war planning and preparation document, the first since April 2010.

The NPR is used to provide smart-sounding euphemism and theoretical distraction to reporters and scholars who sometimes write about nuclear weapons.  Since such weapons can only produce firestorms and massacres that neither medics nor hospitals can begin to respond to, the government uses cool, technical terminology to sell the “need” and “usefulness” of the devices to tax payers.

The new Review begins with “[m]any hoped conditions had been set for deep reductions in global nuclear arsenals, and, perhaps, for their elimination. These aspirations have not been realized. America’s strategic competitors have not followed our example. The world is more dangerous, not less.” The Review then points to Russia and China’s ongoing nuclear weapons modernization programs and North Korea’s “nuclear provocations.” It concludes, “We must look reality in the eye and see the world as it is, not as we wish it be.”

If the US government were to really “look reality in the eye and see the world as it is,” it would recognize that it is failing miserably to lead the world toward the abolition of the only class of weapons that is a true existential threat to our country. As an obvious historic matter, the US is the first and only country to use nuclear weapons. Since WWII the US has threatened to use nuclear weapons in the Korean and Viet Nam wars, and on many other occasions.

Further, it is hypocritical to point to Russia and China’s “modernization” programs as if they are taking place in a vacuum. The US has been upgrading its nuclear arsenal all along. In the last few years our country has embarked on a $1.7 trillion modernization program to completely rebuild its nuclear weapons production complex and all weapons based on land, in the air and at sea.

Moreover, Russia and China’s modernization programs are driven in large part by their perceived need to preserve strategic stability and deterrence by having the ability to overwhelm the US’s growing ballistic missile defenses. Ronald Reagan’s pursuit of “Star Wars” (fed by the Lawrence Livermore National Laboratory’s false promises of success) blocked a nuclear weapons abolition agreement in 1988 with the former Soviet Union. In 2002, George W. Bush unilaterally withdrew the US from the Anti-Ballistic Missile Treaty, which has been a source of constant friction with the Russian government ever since.

More recently, at Israel’s request, the US blocked the 2015 Non-Proliferation Treaty Review Conference at the UN from agreeing to a conference on a nuclear weapon-free zone in the Middle East (Israel has never signed the treaty). As an overarching matter, the US and other nuclear-armed treaty signatories have never honored the Treaty’s Article VI mandate “to pursue negotiations in good faith on effective measures relating to cessation of the nuclear arms race at an early date and to nuclear disarmament…,” in effect since 1970. As a consequence, last year more than 120 countries at the UN passed a nuclear weapons ban treaty which the US vehemently denounced, despite the fact that there have long been ban treaties on chemical and biological weapons which the US has not only supported but also sought to enforce.

With respect to North Korea’s nuclear provocations, that regime is clearly seeking deterrence against the US. North Korea’s infrastructure was completely destroyed during the Korean War, and its people later witnessed the destruction of the Iraqi and Libyan regimes neither of which had nuclear weapons.

Finally, the NPR purports to be about “deterrence” against hostile threats. However, the US’s true nuclear posture has never been just deterrence, but rather the ability to conduct nuclear attacks, including pre-emptive first strikes. This is why the US (and Russia) keep thousands of nuclear weapons instead of the few hundred the other nuclear powers keep for just deterrence. Keeping and improving the ability to use nuclear weapons is the underlying reason for the $1.7 trillion “modernization” program (another euphemism) that is actually developing new nuclear weapons, instead of maintaining a few hundred, known to be “useful” for 50 years, while pursuing nuclear disarmament.

Beyond preserving and upgrading the enormous land, sea and air-based nuclear arsenal, the new NPR calls for:

3) Keeping the 1.2 megaton B83-1 nuclear gravity bomb “until a suitable replacement is identified.” [Hiroshima times 80]

4) “Provide the enduring capability and capacity to produce plutonium ‘pits’ [warhead cores] at a rate of no fewer than 80 pits per year by 2030.”

5) “Advancing the W78 warhead replacement to FY19… and investigating the feasibility of fielding the nuclear explosives package in a Navy flight vehicle.”

Obvious problems with these five programs are:

1) An adversary won’t know whether a Trident sub-launched nuclear warhead is a new low-yield or an existing high-yield warhead. In any event, any belief in a “limited’ nuclear war is a fallacy that shouldn’t be tested. Once the nuclear threshold is crossed at any level, it is crossed, and lower-yield nuclear weapons are all the more dangerous for being potentially more usable.

3) The National Nuclear Security Administration largely justified the ongoing program to create the B61-12 (the world’s first “smart” nuclear gravity bomb) by being a replacement for the 1.2 megaton B83-1 bomb. Does this indicate doubts in the $13 billion B61-12 program? And will it lead to a bump up in the number of nuclear weapons in the US’s arsenal?

5) “W78 warhead replacement… in a Navy flight vehicle” is code for so-called Interoperable Warheads, whose planned three versions together could cost around $50 billion. These are arguably huge make work projects for the nuclear weapons labs (particularly Livermore), which ironically the Navy doesn’t even want (Navy memo, Sept. 27, 2012; https://www.nukewatch.org/importantdocs/resources/Navy-Memo-W87W88.pdf). It is also the driving reason for unnecessary future production of more than 80 pits per year.

Jay Coghlan, Nuclear Watch’s Executive Director, concludes with a grim prognosis: “The new NPR does not even begin to meet our long-term need to eliminate the one class of weapons of mass destruction that can truly destroy our country. It will instead set back arms control efforts and further hollow out our country by diverting yet more huge sums of money to the usual giant weapons contractors at the expense of public health and education, environmental protection, natural disaster recovery, etc. Under the Trump Administration and this NPR, expect Medicare and social security to be attacked to help pay for a false sense of military superiority.” (*Nuclear Watch New Mexico, 903 W Alameda St #325, Santa Fe, NM 87501) — John LaForge