Nuclear power is on the decline—evidence is everywhere. A contributing analyst for Energy Investor, Jeff Siegel, wrote in a July article, “I changed my mind…. nuclear can’t cut it.” Sweden, which derives 42 percent of its electricity from nuclear, is closing four out of ten reactors due to the burdensome cost of nuclear energy. Now the financial crisis of France’s nuclear power industry has forced the country to announce an unprecedented Energy Transition Law that will reduce the share of nuclear energy from 75 percent to 50 percent of its total portfolio in less than ten years. This follows on the heels of a report released in June by the French Agency for Environment and Energy Management demonstrating how France could reach 100 percent renewable energy by 2050. 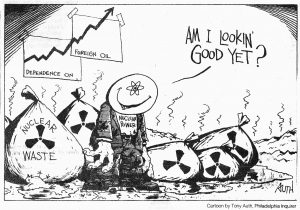 While France has aspired to fuel the nuclear renaissance, economic woes have plagued the industry. The large French nuclear power company Areva recently entered bankruptcy after a loss of $7.37 billion over four years and had to be taken over by the government-run EDF. Yet EDF is having financial troubles of its own, with a $38 billion debt and a negative cash flow. Amidst a throng of reactor construction contracts going over budget and running years behind schedule, along with the discovery of a major design flaw, the company had to abandon several projects. Since our last Quarterly, Areva’s reactor licenses for Calvert Cliffs 3 in Maryland and Callaway 2 in Missouri have been officially canceled. The French government needed a new plan to prevent an economic disaster for the country.

While a financial predicament has led France to see the non-radioactive beam of light in renewable energy, anti-nuclear organizations have always opposed nuclear power on ethical grounds. Pressure from these groups even resulted in EDF spying on Greenpeace, for which they were found guilty in 2011. This movement continues. As we go to press, there is an international action against radioactive uranium transport from Hamburg, Germany to Narbonne, France. A large anti-nuclear contingent is being planned at the United Nations Climate Change Convention beginning December 12, 2015, in Paris. (See http://www.wiseinternational.org/campaign/march-paris.) There is no doubt that the anti-nuclear movement has had an impact on the Energy Transition Law.

The new policy was passed in July by the French Parliament. While it could have gone further, the plan is very ambitious and will need support in order to be fully implemented. After replacing 25 percent of the nation’s electricity with renewable energy by 2025, it will continue to increase to 40 percent renewables by 2040. The Energy Transition Law will remove obstacles that have hindered renewable energy development, and it includes a carbon tax. More importantly, it gives France a place at the head of the table as it hosts the UN climate talks in December.