MINNEAPOLIS, Minnesota—On July 21, the Department of Energy (DOE) held the last of eight hearings it dubbed “Consent-Based Siting” sessions regarding its plans for disposing of the nation’s high-level radioactive waste from commercial reactors. For over 60 years, the roughly 60,000 tons of this waste has been accumulating at reactor sites, and the DOE is again publicly collecting input on how to choose a disposal site. Using its so-called “consent-based” initiative, the DOE is compiling comments regarding a framework for the process of finding a community that would accept decades of dangerous shipments and bury or store the waste. The DOE received less than a warm welcome at the Minneapolis Hilton.

Nuclear waste specialist Kevin Kamps of Beyond Nuclear called the initiative “an elaborate fishing expedition conducted to test the strength of public opposition.”

Mary Olson, from Nuclear Information & Resource Service was critical of the DOE’s process too, and wrote Nukewatch in an email: “Individuals in the Department of Energy, who were part of the short-lived Blue Ribbon Commission on America’s Nuclear Future, believe that during the commission’s term there were ‘volunteer’ sites for waste storage that came forward (Waste Control Specialists in Texas is one), and they decided to engage in what they believe is a consent-based waste storage siting process now, even though a change in federal law will be required to actually move the waste. The meetings were held to provide a public-participation component to this law-less act.”

The DOE’s meetings have been condemned for many reasons, among them:

With DOE’s dog and pony show set for stage, Nukewatch decided that an appropriate role would be to add our own circus act; “Radioactive Eggs and Ham,” a parody of Dr. Seuss’s 1960 children’s book Green Eggs and Ham, riddled with radioactive references was written by me for Nukewatch specially for this meeting. The Q & A dialogue was read by two characters, the DOE and the Potential Waste Host Community. The DOE was played by Nukewatch member Roger Cuthbertson and Women Against Military Madness (WAMM) Board Member Carol Walker. The Potential Waste Host Community was played by Nukewatch members Elena Hight, Austin Sims and me. 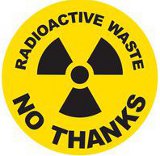 When it came time for John Kotek, the DOE’s Acting Assistant Secretary for Nuclear Energy, to speak, Roger, portraying the DOE, stole the stage proclaiming:

One of the representatives from the DOE stood up to try to quiet Roger, but then from the other side of the room the Potential Waste Host Community responded: “That DOE. That DOE. / I don’t like nuclear energy.”

The DOE representative flailed his arms, discouraged, and sat down.

Roger, portraying the DOE character, continued, “Do you like radioactive waste?”

The Potential Waste Host Community answered, “I do not like radioactive waste.”

Mr. Kotek was still trying to speak and follow the prepared agenda, but even with the microphone he did not drown out the parody.

Roger’s DOE character insisted, “Would you like it here or there?”

Several people tried to prevent the disruption and one even said, “Is there anybody here who has the authority to remove these people?”

No one did. Eventually the Acting Assistant Secretary backed away and surrendered the microphone as we took over the meeting for another three minutes.

Finally the DOE character asked, “You do not like it, so you say. / What shall we do to save the day?”

The Potential Waste Host Community concluded, “Stop making radioactive waste! / Don’t transport it all over the place. / Keep it on site / and save the human race!”

The tone for the remainder of the meeting had been set. Ridiculous claims made by the DOE were met with booing from the audience. During the Q & A period, 11 of 13 questions were critical of the DOE. When it came time for public comment, the denunciations were even more scathing thanks to a well-prepared, well-informed group of speakers that has been working against nukes for decades.

The federal process of seeking waste disposal sites is driven by the nuclear industry whose legal and financial liability will be lifted when its wastes are transferred to federal agencies. The DOE also needs to appear responsive to concerned citizens and has learned this lesson the hard way after facing opposition to the Yucca Mountain site and to earlier waste dump proposals. Now it feels it is necessary to build the image that it is seeking public input at an early stage in the process, and to use benign-sounding terms like “consent.” These moves mean that control of the country’s nuclear future has shifted slightly in the right direction. We will need to maintain public pressure to make sure that nuclear power becomes our nuclear past.

See the entire 57-page Public Meeting transcript including Nukewatch’s disruptive parody (pp. 7-9) and Carol Overland’s comments (p. 49) and read all of “Radioactive Eggs and Ham” to use in your community at www.nukewatchinfo.org.