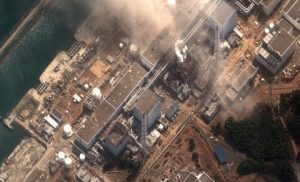 It’s now 10 years since the catastrophic triple meltdowns of reactors at Fukushima in Japan. As Joseph Mangano of the Radiation and Public Health project put it three years ago, “Enormous amounts of radioactive chemicals, including cesium, strontium, plutonium, and iodine were emitted into the air, and releases of the same toxins into the Pacific have never stopped, as workers struggle to contain over 100 cancer-causing chemicals.”

Nukewatch and hundreds of other groups and scientific journals have issued dozens of reports about the disaster. A score of books have been published on the subject, and major media have at least done annual reviews of the official evacuations, cleanups and decontamination efforts. With so much information available, it is not possible to do more than present another update on recent news and analysis.

“So far only one single disease entity has been systematically examined in humans in Fukushima: thyroid cancer,” says Dr. Alex Rosen, the German chair of International Physicians for the Prevention of Nuclear War. Other diseases, such as leukemia or malformations, which are associated with increased radiation exposure, have not been investigated, Rosen told the German medical journal Deutsches Ärzteblatt March 2.

(Fie studies have focused on birth abnormalities in the areas most affected: three on infant mortality rates, one on underweight newborns, and one on declining birth rates 9 months after March 2011.*)

The one disease study of the population was a screening for thyroid cancer in 380,000 local children under the age 18. In January 2018, the journal Thyroid reported 187 cases after five years. Reviewing the study, Mangano write in the Washington Spectator that, “A typical population of 380,000 children would produce 12 cases in five years.” The increase among children is “exactly what would be expected if Fukushima were a factor, as radiation is most damaging to the fetus, infant and child,” Mangano said.

Another large earthquake, magnitude 7.3, struck Feb. 13, again off the coast of the Fukushima reactor complex, and the reported 30 seconds of terror was followed by14 aftershocks up to magnitude 5.

The quake was severe enough that Tokyo Electric Power Co. (Tepco) and federal regulators suspect it caused additional damage to reactors 1 and 3 where cooling water levels fell sharply, the Associated Press reported. The Feb. 13 quake was felt in Tokyo 150 miles away. Japan’s meteorological agency said it was believed to be an aftershock of the record 2011 quake.

“Because (the 2011 quake) was an enormous one with a magnitude of 9.0, it’s not surprising to have an aftershock of this scale 10 years later,” said Kenji Satake, a professor at the University of Tokyo’s Earthquake Research Institute.

Earthquake shocks are not the only recurring nightmare to haunt the survivors of the record quake that killed 19, 630. Typhoon Hagibis slammed into Tamura City in October 2019, and swept away an unknown number of bags of radioactive debris that had been stacked near a river.

Since March 2011, over 22 million cubic meters of contaminated soil, brush and other matter from areas hard hit by fallout have been collected in large black plastic bags and piled in temporary storage mounds in thousands of places. (“Fukushima residents fight state plan to build roads with radiation-tainted soil,” Japan Times, Apr. 29, 2018) Yet the volume is the tip of the iceberg: According to R. Ramachandran, in The Hindu, January 31, 2020, no decontamination activities are planned for the majority of forested areas which cover about 75 per cent of the main contaminated area of 9,000 square km.”

Reporting Feb. 14 about the latest quake, the AP noted that Tepco “has repeatedly been criticized for cover-ups and delayed disclosures of problems.” On June 22, 2016, Tepco’s President Naomi Hirose publicly admitted that the company’s lengthy refusal to speak of the “meltdowns” it knew of at its three reactors was tantamount to a cover-up and apologized for it.

The Washington Post reported March 6, 2021 that, “For years, Tepco claimed that the treated water stored at the plant contained only tritium, but data deep on its website showed that the treatment process had failed.” The tanks now hold almost 1.25 million tons of highly contaminated waste water. “In 2018, [Tepco] was forced to acknowledge that 70 percent of the water is still contaminated with dangerous radioactive elements — including strontium-90, a bone-seeking radionuclide that can cause cancer — and will have to be treated again before release,” the Post reported.

Harvey Wasserman reported for Columbus Institute for Contemporary Journalism’s The Free Press on a July 2007 earthquake that shook Japan and forced dangerous emergency shutdowns at four reactors at Kashiwazaki. “For three consecutive days [Tepco] was forced to issue public apologies for erroneous statements about the severity of the damage done to the reactors, the size and lethality of radioactive spills into the air and water, the on-going danger to the public, and much more. Once again, the only thing reactor owners can be trusted to do is to lie.”

Work just published in the journal Science of the Total Environment documents new, highly radioactive particles that were released from the destroyed Fukushima reactors. The study was led by Dr. Satoshi Utsunomiya and Kazuya Morooka of Kyushu University. “Two of these particles have the highest cesium radioactivity ever measured for particles from Fukushima,” the research found. The study analyzed particles that were taken from surface soils collected 3.9 kilometers from the reactor site.

Speaking with Science Daily Feb. 17, Dr. Utsunomiya said, “Owing to their large size, the health effects of the new particles are likely limited to external radiation hazards during static contact with skin.” The particles were reportedly spewed by the hydrogen explosions that rocked the reactor buildings and fell within a narrow zone that stretches ~8 kilometers north-northwest of meltdowns.

But Dr. Utsunomiya also said the long-lived radioactivity of cesium in “the newly found highly radioactive particles has not yet decayed significantly. As such, they will remain in the environment for many decades to come, and this type of particle could occasionally still be found in radiation hot spots.”

Smaller radioactive particles of uranium, thorium, radium, cesium, strontium, polonium, tellurium and americium were found afloat throughout Northern Japan, according to a report by Arnie Gundersen and Marco Kaltofen published July 27, 2017 in Science of the Total Environment. The radioactively hot particles were found in dusts and soils. About 180 particulate matter samples were taken from automobile or home air filters, outdoor surface dust, and vacuum cleaner bags. Some142 of the samples (about 80 percent) contained cesium-134 and cesium-137 which emit intense beta radiation and is very dangerous if ingested or inhaled. “A majority of these samples were collected from locations in decontaminated zones cleared for habitation by the National Government of Japan,” the authors revealed.

“Successive governments during the last 10 years … have attempted to perpetrate a myth about the nuclear disaster. They have sought to deceive the Japanese people by misrepresenting the effectiveness of the decontamination program and ignoring radiological risks,” said Shaun Burnie, Senior Nuclear Specialist at Greenpeace East Asia and co-author of the first report.

Key findings of the radiation report Fukushima 2011-2020 are:

— This is a report is the Spring 2021 Nukewatch Quarterly soon in your mailbox. A version of the article was published at CounterPunch, March 12-14, 2021