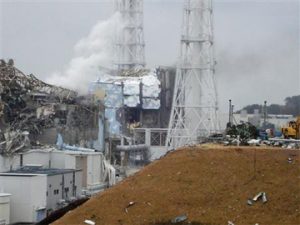 By John LaForge and Bonnie Urfer

News from northwest Japan is changing minute by minute after the record-breaking March 11 earthquake and tsunami-caused radiation disaster involving at least six nuclear reactors. For the first time since the 1986 Chernobyl catastrophe in Ukraine, scrolls at the bottom of TV screens are warning, “Fuel melting at nuclear reactors,” and chances of multiple core meltdowns and massive radiation releases were being warned of by the government and by independent observers alike.

The enormous radiation risks posed by the out-of-control reactor operations forced the government in Tokyo, 140 miles away, to declare its first ever “nuclear emergency” at three complexes, Fukushima Daiichi I, Fukushima Daini II, and Onagawa, with a combined total of 13 reactors. By Tues. Mar. 15, the International Atomic Energy Agency had declared the radiation crisis a level 6 disaster on its 1-to-7 scale.

As we go to press, at least seven workers were missing after explosions rocked three reactors at the Diiachi site. The hydrogen blasts, plus two fires that broke out in the site’s irradiated waste fuel pool, caused radiation levels to spike outside the facility. Consequently, authorities ordered the evacuation of at least 500,000 people from a 13-mile radius around the complex, warned people not to drink from public water sources for fear of contamination, told others to stay indoors in spite of severe earthquake aftershocks, and began the voluntary testing of people for contamination — all while struggling to cool down three failed reactors.

The 8.9 magnitude Miyagiken-Oki earthquake of March 11 — the worst in Japanese history — struck on a busy Friday afternoon. The epicenter was 80 miles off the Northeast coast of Japan’s biggest island, Honshu, but the quake’s enormous power, and the impact of the resulting tsunami, crashed the electrical grid, cut power to over 4 million buildings, and forced the shutdown of 11 of Japan’s 55 power reactors.

The tsunami — which reached the terrifying height of 30 feet in some places — smashed with full force directly into the coastal face of the sprawling Daiichi complex, with six reactors, and to a lesser degree into the Daini site, seven miles to the south, with four.

The earthquake, the staggering tsunami and electrical blackout that resulted meant that emergency reactor cooling systems needed to kick in. But six reactors (three at Fukushima I and three at Fukushima II) completely lost cooling ability after the tsunami knocked out all 13 emergency backup generators. These back-up generators are essential during emergencies to circulate cooling water through the extremely hot reactor cores (3,400 degrees) and around the ferociously radioactive waste fuel which is kept in pools of cooling water.

Without cooling water and with back-up battery power having failed as well, the overheated fuel rods inside three Diiachi reactors boiled off their coolant and their exposed fuel rods rapidly began melting. The extreme danger is this situation is the breaching of a reactor vessel and a massive release of radiation. Having no power to operate cooling systems, the government (using military helicopters and soldiers trained for chemical, biological and nuclear warfare) rushed to deliver heavy replacement batteries to the site in order to pump or inject coolant into the cores.

All six of the failed reactors, owned by the Tokyo Electric Power Co. (Tepco), were in some danger of melting down. The government, in an eerie parallel to the 1979 Three Mile Island disaster in Pennsylvania, issued ever-widening evacuation orders over the course of the emergency. On Friday, it set a 3 kilometer radius, then 10, and then — after a massive explosion in Daiichi reactor 1 at 4:30 p.m. local time, March 12 — increased the evacuation to 20 kilometers, or 12.5 miles. That explosion tore apart the containment building that houses the reactor, leaving only skeletal wreckage around the core.

Reuters reported March 11 that pressure inside the failed Unit 1 reactor core had increased to 2.5 times its designed capacity, according to the Japanese Nuclear Safety Agency. At the same time, Japan’s Chief Cabinet Secretary Yukio Edano told the press that Unit 2 “remains at a high temperature,” because it “cannot cool down.” The venting of gas to relieve this pressure filled Unit 1’s containment structure with volatile hydrogen, according to the Safety Agency, and led to the explosion.

A second hydrogen explosion occurred Monday and destroyed the containment structure housing Daiichi Unit 3. In a sign of the operator’s utter loss of control, the Associated Press reported that fuel rods at Daiichi Unit 2 were completely uncovered. The blast injured 11 workers and released as much radiation in an hour as would normally be expected in six months. It exposed at least 160 people to high doses and 22 received treatment for radiation poisoning.

The government, obviously fearing a large radiation release, on Saturday began preparing the distributing potassium iodide pills which can inhibit the uptake of radioactive iodine-131 by the thyroid. Reactor accidents can disperse huge volumes of radio-iodine which, in the body, seeks the thyroid and causes thyroid cancer.

Prof. Michio Kaku, a theoretical physicist at the City University of New York, told ABC News on Monday, “Thank god the vessel itself, which contains the super-hot uranium, was intact. If it had ruptured you’re talking about an accident that is beyond comprehension,” to which the ABC replied: “That could still happen.”

This indeed may be what happened next. At 6 p.m. local time the 14th, a third explosion shook Daiichi Unit 2 where all the coolant had been lost and where fuel was reported to have been completely exposed. This third explosion was significantly different from the first two, since it caused a burst of radiation to be reported by the government. Observers speculated that the blast could have broken open the reactor core which may now be venting high levels of radiation to the environment.

In a last-ditch effort to cool the fuel inside the cores at Daiichi’s units 1, 2 and 3, the government and Tepco began injecting them with sea water, but the effort appeared too slow to keep the coolant from boiling away from the hot fuel. This “Hail Mary” use of seawater was only grudgingly allowed by Tepco, since salt water’s corrosive and clogging character means the reactors will be ruined and permanently closed.

According to news reports, fuel in Unit 1 has been uncovered to as much as 6 feet. Confirmation of melted fuel came Sunday March 13 when radioactive cesium-137 was detected outside the reactor, according to Yuji Kakizaki, a spokesman for Japan’s Nuclear and Industrial Safety Agency.

As Dr. Kaku told ABC News: “Japan’s reactors are the safest in the world, but they were never designed to handle this big a quake. The seawater dump is a last-ditch effort. The alternative is to expose the core, let it melt and create a steam explosion that will blow the reactor apart.”

Radiation inside buildings including the control room at the failed Daiichi Unit 1 reached 1,000 times normal operational levels at one point Saturday, according to Tepco. This radioactivity doubtlessly was dispersed to the environment by the Unit 1’s explosion. Indeed, the Onogawa complex to the north (with three reactors) declared its own “nuclear emergency” that day — because radiation there had risen to “higher-than-permitted” levels. The government later claimed that radiation blown from the explosion at Daiichi 1 had caused the increased contamination.

Japanese industry watchdogs who translated a government report on the unfolding events Saturday found a dire prediction from the safety agency. It warned that if new cooling water couldn’t be pumped into Daiichi Units 1 and 2 by 10 p.m. local time Saturday the 12th, the fuel would be uncovered. This is what happened in Units 1, 2 and 3 where the superheated fuel began melting. Because of failed cooling systems at four other reactors, melting of fuel was highly likely at all of them.

The watchdog group, Citizens’ Nuclear Information Center in Tokyo, reported that Tepco’s official website assures the public that radiation monitoring outside its reactors “goes on around the clock year round.” However, CNIC reported March 11 that the company said at the bottom of the same webpage, “This system is currently shutdown.”

The group’s independent monitoring of radiation levels was not possible because of government evacuation orders. This has left the Japanese public and the world with only the government and company officials to rely on regarding radiation levels. The CNIC activists were skeptical about the shutdown of the monitors and suggested that it was an attempt to downplay the severity of radioactive releases.

Throughout the emergency, Japanese Prime Minister Kan repeatedly declared on television that none of the reactors were in any danger, even after Tepco announced it had begun venting contaminated steam and gas from the failed reactors’ containment structures. With the venting underway at up to five reactors, safety agency spokesman Ryohei Shiomi had the nerve to declare, “Radiation spread by the venting won’t be at a level dangerous to health.” Regulatory agencies all acknowledge that even the slightest radiation exposure increases the risk of cancer.

Although the quake’s epicenter was eight miles below sea level and 231 miles northeast of Tokyo, its power shook and destroyed buildings there.

After a September 30, 1999 radiation accident killed two workers and contaminated over 400 residents in Tokaimura, the Japanese were jolted. The New York Times reported, “many here are wondering if a wariness over nuclear hazards borne of this accident will not, indeed should not, lead to an eventual phasing out of the industry altogether.” Yet even after a 2007 quake flooded and shuddered four reactors on the other side of the island, and after five workers in the Mihama reactor were burned to death by high-pressure steam exploding from a burst duct in 2004, the country still ignores the radiation industry’s incalculable risks.

— John LaForge & Bonnie Urfer are on the staff of Nukewatch, the nuclear watchdog group in Wisconsin, and report on nuclear power and weapons in the Nukewatch Quarterly. 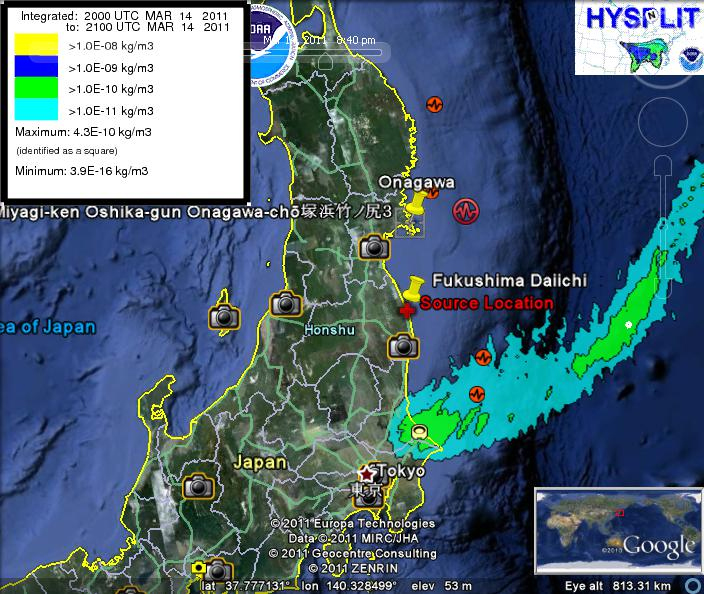 Tens of thousands of news articles can be read online to keep you updated on the nuclear crisis in Japan. Below are resources we have found helpful.

The Low Level Radiation Campaign is updating their information daily. Follow the link below.
http://www.llrc.org/

Watch coverage from Japan at:
http://www.ustream.tv/channel/nhk-world-tv

Contact us for related articles and information from Nukewatch.