By Dr. Ian Fairlie, The Ecologist

Note: New evidence from Fukushima shows that as many as 2,000 people have died from necessary evacuations, while another 5,000 will die from cancer. Future assessments of fatalities from nuclear disasters must include deaths from displacement-induced ill-heath and suicide, in addition to those from direct radiation impacts.1

Official data from Fukushima show that nearly 2,000 people died from the effects of evacuations necessary to avoid high radiation exposures from the disaster.

The uprooting to unfamiliar areas, cutting of family ties, loss of social support networks, disruption, exhaustion, poor physical conditions and disorientation can and do result in many people, in particular older people, dying.

Increased suicide has occurred among younger and older people following the Fukushima evacuations, but the trends are unclear.

A Japanese Cabinet Office report stated that, between March 2011 and July 2014, 56 suicides in Fukushima Prefecture were linked to the nuclear accident. This figure should be taken as a minimum, rather than a maximum.

It is necessary to include the mental health consequences of radiation exposures and evacuations. For example, Becky Martin has stated her PhD research at Southampton University in the UK shows that “the most significant impacts of radiation emergencies are often in our minds.”

She adds, “Imagine that you’ve been informed that your land, your water, the air that you have breathed may have been polluted by a deadly and invisible contaminant. Something with the capacity to take away your fertility, or affect your unborn children.

“Even the most resilient of us would be concerned … many thousands of radiation emergency survivors have subsequently gone on to develop Post-Traumatic Stress Disorder, depression, and anxiety disorders as a result of their experiences and the uncertainty surrounding their health.”

It is likely that these fears, anxieties, and stresses will act to magnify the effects of evacuations, resulting in even more old people dying or people committing suicide.

Such considerations should not be taken as arguments against evacuations, however. They are an important, life-saving strategy. But, as Becky Martin argues, “We need to provide greatly improved social support following resettlement and extensive long-term psychological care to all radiation emergency survivors, to improve their health outcomes and preserve their futures.”

Dr. Alfred Körblein from Nuremberg, Germany, recently noticed and reported on a 15 percent drop (highly statistically significant) in the numbers of live births in Fukushima Prefecture in December 2011, nine months after the accident.

This might point to higher rates of early spontaneous abortions. He also observed a (statistically significant) 20 percent increase in the infant mortality rate in 2012, relative to the long-term trend in Fukushima Prefecture—plus six surrounding prefectures—which he attributes to the consumption of radioactive food:

“The fact that infant mortality peaks in May 2012, more than one year after the Fukushima accident, suggests that the increase is an effect of internal rather than external radiation exposure.

“In Germany [after the Chernobyl nuclear disaster] perinatal mortality peaks followed peaks of cesium burden in pregnant women with a time-lag of seven months. May 2012 minus seven months is October 2011, the end of the harvesting season. Thus, consumption of contaminated foodstuff during autumn 2011 could be an explanation for the excess of infant mortality in the Fukushima region in 2012.”

These are indicative rather than definitive findings and need to be verified by further studies. Unfortunately, such studies are notable by their absence.

Cancer and other late effects from radioactive fallout

Finally, we have to consider the longer term health effects of the radiation exposures from the radioactive fallouts after the four explosions and three meltdowns at Fukushima in March 2011. Large differences of view exist on this issue in Japan. These make it difficult for lay people and journalists to understand what the real situation is. 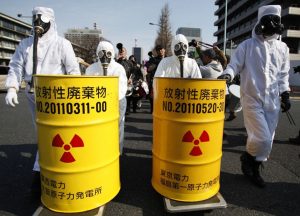 The Japanese government, its advisors, and most radiation scientists in Japan (with some honourable exceptions) minimise the risks of radiation. The official widely-observed policy is that small amounts of radiation are harmless: scientifically speaking this is untenable.

For example, the Japanese government is attempting to increase the public limit for radiation in Japan from 1 mSv* to 20 mSv per year. Its scientists are trying to force the International Commission on Radiological Protection to accept this large increase. This is not only unscientific, it is also unconscionable.

Part of the reason for this policy is that radiation scientists in Japan (in the US, as well) appear unable or unwilling to accept the stochastic nature of low-level radiation effects. “Stochastic” means an all-or-nothing response: you either get cancer, etc., or you don’t.

As the dose decreases, the effects become less likely: the chance of cancer declines all the way down to zero dose. The corollary is that tiny doses, even well below background, still carry a small chance of cancer: there is never a safe dose.

But, as observed by Spycher et al. (2015), some scientists “a priori exclude the possibility that low dose radiation could increase the risk of cancer. They will therefore not accept studies that challenge their foregone conclusion.”

One reason some scientists refuse to accept radiation’s stochastic effects (cancers, strokes, cardiovascular system diseases, hereditary effects, etc.) is that they only appear after long latency periods—often decades, for solid cancers. For the Japanese government and its radiation advisors, it seems out-of-sight means out-of-mind.

The Japanese government may be able to ignore late radiogenic effects, but the evidence for them is absolutely rock solid. Ironically, it comes primarily from the world’s largest ongoing epidemiology study, the “Life Span Study” of Japanese atomic bomb survivors by the Radiation Effects Research Foundation which is based in Hiroshima and Nagasaki.

The lessons of Chernobyl

The mass of epidemiological evidence from the Chernobyl disaster in 1986 clearly indicates that cancer etc increases will very likely also occur at Fukushima, but many Japanese (and US) scientists deny this evidence.

For example, much debate currently exists over the existence and interpretation of increased thyroid cancers, cysts, and nodules in Fukushima Prefecture resulting from the disaster. From the findings after Chernobyl, thyroid cancers are expected to start increasing 4 to 5 years after 2011.

It’s best to withhold comment until clearer results become available in 2016, but early indications are not reassuring for the Japanese government. After then, other solid cancers are expected to increase as well, but it will take a while for these to become manifest.

The best way of forecasting the numbers of late effects (as in cancers, etc.) is by estimating the collective dose to Japan from the Fukushima fall out. We do this by envisaging that everyone in Japan exposed to the radioactive fallout from Fukushima has thereby received lottery tickets: but they are negative tickets. That is, if your lottery number comes up, you get cancer.2

The 2013 UN Scientific Committee on the Effects of Atomic Radiation (UNSCEAR) Report has estimated that the collective dose to the Japanese population from Fukushima is 48,000 person Sv. This is a very large dose; see below.

About 60 people died immediately during the actual evacuations in Fukushima Prefecture in March 2011. Between 2011 and 2015, an additional 1,867 people3 in the Prefecture died as a result of the evacuations following the nuclear disaster.4 These deaths were from ill health and suicides.

From the UNSCEAR estimate of 48,000 person Sv, it can be reliably estimated (using a fatal cancer risk factor of 10 percent per Sv) that about 5,000 fatal cancers will occur in Japan in the future from Fukushima’s fallout. This estimate from official data agrees with my own personal estimate using a different methodology.

In sum, the health toll from the Fukushima nuclear disaster is horrendous. At the minimum:

Among the notable environmental effects are that eight percent of Japan’s landmass (30,000 km2), including parts of Tokyo, have been contaminated by radioactivity; overall economic losses have been estimated between $300 and $500 billion.

Catastrophes that must never be repeated

The Fukushima accident is still not over and its ill-effects will linger for a long time into the future. However we can say now that the nuclear disaster at Fukushima delivered a huge blow to Japan and its people.

Two thousand Japanese people have already died from the evacuations and another 5,000 are expected to die from future cancers.

It is impossible not to be moved by the scale of Fukushima’s toll in terms of deaths, suicides, mental ill-health and human suffering. Fukushima’s effect on Japan is similar to Chernobyl’s massive blow against the former Soviet Union in 1986.

Indeed, several writers have expressed the view that the Chernobyl nuclear disaster was a major factor in the subsequent collapse of the USSR during 1989-1990.

It is notable that Mikhail Gorbachev, President of the USSR at the time of Chernobyl and Naoto Kan, Prime Minister of Japan at the time of Fukushima have both expressed their opposition to nuclear power. Indeed Kan has called for all nuclear power to be abolished.

—Dr. Ian Fairlie was head of the Secretariat to the UK government’s Committee on internal radiation risks.

1 The article appeared in The Ecologist, Aug. 17, 2015: theecologist.org/News/news_analysis/2984986/fukushima_thousands_have_died_thousands_more_will_die.html.
2 Credit to Jan Beyea in the US for the negative lottery idea.
3 Correct as of March 2015.
4 In addition, 1,603 people were killed directly by the earthquake and tsunami in Fukushima Prefecture, and approximately 1,350 tsunami evacuee deaths occurred in Miyagi and Iwate Prefectures. In the latter cases, the evacuations were not radiation-related.
*A milliSievert (mSv) is one thousandth of a Sievert (1,000 mSv = 1 Sv). A Sievert (Sv) is a measure of the health effect of low levels of external ionizing radiation on the human body.