The Tokyo Electric Power Co. (Tepco) urged the Ninth Circuit US Court of Appeals in Pasadena on Sept. 1 to dismiss a $1 billion class action on behalf of hundreds of US service members exposed to radiation while responding to the Fukushima nuclear disaster in March 2011, arguing the claims belong in Japan.

The lawsuit is by hundreds of US Marines, sailors, airmen and their dependents who say they were sickened by the radioactive fallout that drifted across their ships when they served in a relief force of 25 Navy vessels sent to aid Japan while three Tepco reactors were simultaneously undergoing catastrophic explosions and uranium fuel meltdowns. Prevailing winds at first blew radioactive fallout from the exploding reactors out to sea where it doused the ships, but later shifted sending radiation plumes inland.

The three-judge panel heard arguments against Tepco and several other corporate co-defendants for allegedly lying to US forces about the risks of radiation and luring US forces into danger.

According to the sailors’ complaint, filed in 2012 and amended in 2014, Tepco knew that Navy personnel were in danger of suffering from radiation exposure, leaving them at risk of cancer and other health problems, but neglected to warn them. The company should have informed the soldiers of the meltdowns before they arrived, the complaint says.

In October 2014, US District Judge Janis L. Sammartino denied Tepco’s motion to dismiss the suit, ruling that the sailors’ complaint sufficiently alleged that Tepco’s negligence—not the Navy’s decision to send them to the area to provide humanitarian relief—caused their injuries. At the Sept. 1 hearing, Tepco urged the court to reverse Judge Sammartino’s refusal to dismiss the suit, Law360 reported. A decision isn’t expected before November. 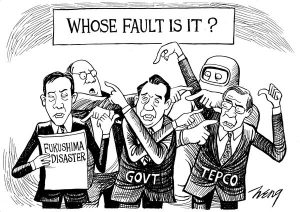 For its part, Tepco denied that the sailors’ “asserted physical ailments were caused by radiation from the FNPP (Fukushima Nuclear Power Plant).” The company relies on a US Defense Department report commissioned by Congress that concluded that “the radiation exposures to the sailors serving aboard the [carrier USS] Ronald Reagan were very low” and that “it is implausible that these low-level doses are the cause of the health effects reported.”

Vice Adm. William Hilarides, head of Naval Sea Systems Command, wrote to Stars and Stripes, “The radioactive contamination found on the ships involved in Operation Tomodachi is at such low levels that it does not pose a health concern to the crews, their families, or maintenance personnel.”

Five years since the Fukushima disaster began, 16 of 25 US Navy ships that participated in relief efforts for Japan remain contaminated with low levels of radiation, Navy officials told Stars and Stripes, mostly in “ventilation systems, main engines and generators.” The largest of the 16 is the carrier USS Ronald Reagan which carries 5,000 personnel and most of the 400 plaintiffs in the class action were aboard the Reagan.

Former US Sen. John Edwards and former Japanese Prime Minister Junichiro Koizumi have publicly promised to support the sailors, Marines and other personnel in their class action against Tepco and other major corporations.

Senator Edwards, the Democratic nominee for Vice President in 2004, is now a partner in a Raleigh law firm specializing in personal injury, economic justice and property rights. Edwards offered his “legal and personal assistance” after hearing about the lawsuit.

Prime Minister Koizumi has called on the Japanese public to donate to a fund that he established to support the US veterans’ lawsuit.

“I felt I had to do something to help those who worked so hard for Japan,” Koizumi told the Guardian. Promising to raise $1 million, he said, “That won’t be enough money, but at least it will show that Japan is grateful for what they did for us.”

Koizumi went beyond making nice with US first responders. While working hard to prevent the restart of Japans 50 shuttered power reactors, he accused the current Prime Minister Shinzo Abe of lying about the current state of the destroyed reactor complex.

“It’s a lie,” Koizumi, 74, said to a group of reporters in Tokyo September 7. “When [Abe] said the situation was under control, he was lying. It is not under control,” the Guardian reported.

Koizumi added that after the Fukushima crisis he had “studied the process, reality and history of the introduction of nuclear power, and became ashamed of myself for believing such lies.

… “Today the disaster site remains in crisis mode. … (Tepco) currently circulates water through the three melted units to keep them cool—generating a relentless supply of radioactive water. To make matters worse, groundwater flowing from a hill behind the crippled plant now mingles with radioactive materials before heading into the sea. …

“Health reports, too, are worrisome. Scientists have seen an increase in thyroid cancers among the children who had lived in Fukushima at the time, although it is too early to tell if those cases can be attributed to the accident.”

Radioactive contamination in the seabed off the Fukushima coast is hundreds of times above pre-2011 levels, while contamination in local rivers is up to 200 times higher than ocean sediment, according to results from Greenpeace Japan survey work.

“The extremely high levels of radioactivity we found along the river systems highlights the enormity and longevity of both the environmental contamination and the public health risks resulting from the Fukushima disaster,” said Ai Kashiwagi, Energy Campaigner at Greenpeace Japan.

“These river samples were taken in areas where the Abe government is stating it is safe for people to live. But the results show there is no return to normal after this nuclear catastrophe,” said Kashiwagi.

Riverbank sediment samples taken along the Niida River in Minami Soma, measured as high as 29,800 Becquerels-per-kilo (Bq/kg) for radiocaesium (Cs-134 and 137). The Niida samples were taken where there are no restrictions on people living, as were other river samples. [The government says soil contaminated with over 8,000 Bq/kg must be isolated and disposed of as highly radioactive waste.]

The lifting of evacuation orders in March 2017 for areas that remain highly contaminated is a looming human rights crisis and cannot be permitted to stand, Greenpeace said. The vast expanses of contaminated forests and freshwater systems will remain a perennial source of radioactivity for the foreseeable future, as these ecosystems cannot simply be decontaminated.

Caesium-137 has a half life of 30 years, and will continue to pose a risk to the environment and human health for hundreds of years.

Former Japanese Prime Minister Naoto Kan, said “So far the government is paying $70 billion to support Tepco. But that is not enough. It will probably cost more than $240 billion. It’s become clear that nuclear power is more dangerous than other energy sources. In the past, they said it was cheap. But it was only cheap if the cost of accidents or the cost of spent fuel and nuclear waste was not included.” —Al Jazeera, Aug. 25, 2016