US Agency Hid Dangers to US Reactors During Early Weeks

NBC News has unearthed internal government emails by staff at the Nuclear Regulatory Commission that prove the agency made a concerted effort to downplay known dangers to aging US reactors from earthquakes and tsunamis. As reported by Bill Dedman for NBC News March 10, the emails “show that the campaign to reassure the public about America’s nuclear industry came as the agency’s own experts were questioning US safety standards and scrambling to determine whether new rules were needed to ensure that the meltdown[s] occurring at the Japanese [site] could not occur here.”

The emails, obtained via the Freedom of Information Act after a lengthy delay, show that if asked whether the Diablo Canyon reactors on the California coast or Indian Point near New York City could withstand the same size tsunami that hit Japan, “spokespeople were told not to reveal that NRC scientists were still studying that question.”

“From the earliest hours of the crisis, the emails among NRC staff show deep concern about the developing crisis in Japan, particularly among the technical experts,” NBC’s Dedman reported.

As Dedman said, “The emails pull back the curtain on the agency’s efforts to protect the industry it is supposed to regulate. … When someone asked about a topic that might reflect negatively on the industry, they changed the subject.”

Dedman’s account went as far as to say, “Dating back to the Three Mile Island nuclear crisis in 1979, many nuclear watchdogs and critics have said that the NRC acts first to protect the industry, and its own reputation.”

Dedman interviewed one prominent critic. “The NRC knew a lot more about what was going on than it wanted to tell the American people,” said Edwin Lyman, senior scientist at the nuclear watchdog group Union of Concerned Scientists and co-author of the new book Fukushima: The Story of a Nuclear Disaster (The New Press 2014).

Pacific albacore tuna caught near the Pacific Northwest are contaminated with three times as much radioactive cesium-137 now than before the triple meltdowns at Fukushima, Oregon State University researchers announced April 28.

Reporting on the study has been disinformative and openly contradictory. Philip Ross, writing in the International Business Times April 30, followed his lead paragraph with, “Nevertheless, investigators say the fish is safe for eating.”

Not so. Delvan Neville, lead author of the study, said in his statement to Oregon’s Statesman Journal, “You can’t say there is absolutely zero risk because any radiation is assumed to carry at least some small risk.” In other words, no amount of cesium-137 in food is “safe.” Neville is a graduate research assistant in the Department of Nuclear Engineering and Radiation Health Physics at Oregon State University.

Again Ross wrote that the amount of cesium-137 found in the tuna was “about a thousand times lower,” than “the maximum level considered safe by the US Department of Agriculture, or FDA.” 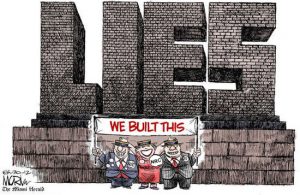 This statement too is patently false. Nowhere does the FDA say that radiation exposure is “safe” at any level. The agency merely sets “Compliance Policy Guides” — which are not legally enforceable limits — on the amount of radioactive contamination that may be in US foods.

The FDA describes its “derived intervention levels” or DILs, as mere recommendations. Its website explains that: “The DILs adopted in this Compliance Policy Guide are not binding on FDA, the regulated industry, or the courts. In any given case, FDA may … decide not to initiate an enforcement action against food with concentrations that meet or exceed the DILs.” In other words, these recommended maximum amounts of radioactivity in US foods are not enforceable by law and may not be enforced even by the FDA itself.

Oregon State’s tuna study was published in the journal Environmental Science and Technology. Reuters reported that Jason Phillips, a co-author of the report, said 26 of the large Pacific fish were analyzed from 2008 to 2012 and that albacore tuna was a good species to study because it migrates as far as Japan. “If we were going to see it [cesium-137] in something, we would see it in albacore or other high-level predators,” he told Reuters.

This use of the word “predator” is significant. Dr. Steve Starr, Director of Clinical Laboratory Science Program, University of Missouri-Columbia, said in a recent lecture, “cesium-137 tends to bio-accumulate in plants and animals, which means it cannot be excreted faster than it is being ingested. Thus, as it accumulates it increases in its concentration in the plants or animals that are routinely ingesting it. Cesium-137 also tends to bio-magnify as it moves up the food chain. This means it becomes progressively more concentrated in predator species….”

Fairewinds Energy Education reports that the wording of a court’s May 21st ruling against the first restart of a nuclear reactor since March 2011 was moving. The judge’s concluding remark was: “Even if not operating nuclear power plants may result in massive trade deficit, the wealth of nations exists as long as citizens can live lives that are deeply rooted in sound land. Not being able to bring back such a reality is the loss of the wealth of nation.”

Contaminated soil, cemeteries may be moved outside Fukushima state

The federal government has announced that a state- owned company will move thousands of tons of radioactively contaminated soil — scraped from school yards and elsewhere during decontamination efforts — outside Fukushima Prefecture “within 30 years,” after first keeping it in storage in the heavily contaminated prefecture.

Mayors and other officials from towns of Okuma and Futaba — candidate sites for “temporary” storage centers — were informed of the government’s plans May 27. New federal law will have to be enacted in order to allow the Japan Environmental Safety Corporation (JESCO) to operate the “temporary” storage sites.

In a macabre aspect of compensating for areas made radioactively uninhabitable by fallout from the three reactor meltdowns, the government is considering covering the cost of building new cemeteries and reburying the remains of people now buried in exclusion zones.

Last July, the Ministry reviewed exposure data on about 1,300 workers and reported that Tepco’s exposure levels of 452 workers were too low. After that announcement, the Ministry followed up on records of the remaining 6,200 workers, leading to the additional findings.

The International Commission on Radiological Protection says a person should be exposed to no more than one millisievert per year from all sources of radiation.

The 142 contaminated workers were part of the 7,500 emergency employees and first responders that were sent to try to cool the six reactors and waste fuel pools at the Fukushima complex. The mega-quake and tsunami caused a Station Black Out, or total loss of AC power used to run cooling mechanisms, and the consequent melting of fuel rods dispersed massive amounts of radiation to the air and the Pacific Ocean.

Tepco did not have whole-body radiation counters when the radiation disaster began, thus accurate contamination measurements by the utility were not possible.