Ever wonder what happens with the radioactive materials that Tokyo Electric Power Co. said it would remove using a filter system from its 1.25 million tons of Fukushima waste water? The cesium-137, strontium-90, cobalt-60, ruthenium-106, carbon-14, tritium, iodine-129, plutonium-239, and dozens of other isotopes end up as highly radioactive sludge collected by the Advanced Liquid Processing System. And although the ALPS system has failed to remove these deadly isotopes from 70 percent of the water, the “clean-up” system has so far produced some 3,000 large containers filled with the radioactive sludge. Approximately 875,000 tons of waste water stored in large tanks must be refiltered, which will produce more “hot” sludge. 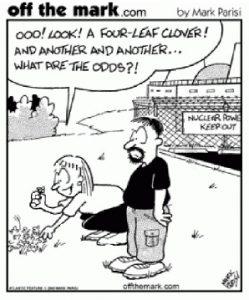 In June, Japan’s Nuclear Regulation Authority announced that 31 of the 3,000 containers holding this deadly sludge were corroded badly enough that they must be replaced, the daily Mainiichi Japan reported. The authority also warned that another 56 cylinders would need replacing within two years.

Each waste cylinder is reportedly about 5 feet in diameter and 6.2 feet tall. So, with about 30 cubic feet of hot sludge each, the 3,000 cans hold at least 90,000 cubic feet of highly radioactive waste that will require expensive permanent isolation.

Because of its corrosiveness and extremely long-lived radioactivity, this waste will require monitoring and repeated re-packaging in perpetuity — an expense not included when nuclear power advocates report electric rates to customers.