Why the entire Pacific fishery could be tainted

“If they can get you asking the wrong questions, they don’t have to worry about the answers.”

Distracting the public from the 300 tons (80,000 gallons) of highly radioactive water spreading into the Pacific Ocean every day from the triple reactor melt-through at Fukushima-Daiichi, is news of the plan to build an underground “ice wall” to dam up the poisoned water before it leaks to the sea. The project is reportedly a better plan than the failed concrete wall that Tokyo Electric Power Company (Tepco) first built.

This frozen finger-in-the-dike won’t be completed until 2015, and it may then fail. Even if it were to work as planned, there is a risk of reversing the water flow, forcing highly radioactive water to seep out from the reactor buildings to the aquifer. Meanwhile, nothing is slowing the relentless radioactive contamination of the Pacific — the world’s largest ocean which covers about a third of Earth.

What we’re being distracted from is the threat to the fishery caused by Fukushima’s ongoing radioactive gusher. At least 300 tons of cesium- and strontium-contaminated water is still spewing into the Pacific every day. Tepco admitted in August that this massive carcinogenic hemorrhage has been going on since March 11, 2011. It amounts to about 85 million gallons — 80,000 gallons per day, for 942 days, dumped into the Pacific — and counting.

The radiation dumped by Fukushima into the environment has exceeded that of the 1986 Chernobyl catastrophe, so we may stop calling it the second worst nuclear power disaster in history. Total atmospheric releases from Fukushima so far are between 5.6 and 8.1 times that of Chernobyl, according to the 2013 World Nuclear Industry Status Report. Professor Komei Hosokawa, who wrote the Fukushima section, told London’s Channel 4 News, “The situation is not under control. Almost every day new things happen, and there is no sign that they will control the situation in the next few months or years.”

Where have all the Becquerels gone?

Japan has decided that fish contaminated with fewer than 100 Becquerels per kilogram (Bq/kg) of cesium-137 is good enough to eat. Some local officials have set a stricter bar of 50 Bq/kg. 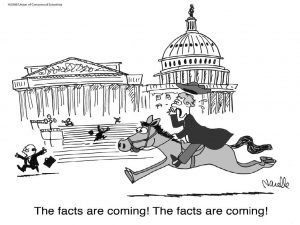 In the US the permissible level of cesium in food is 1,200 Bq/kg. Canada allows 1,000 Bq/kg. The difference is startling. The huge discrepancy allows importation by the US and Canada of what Japan considers highly contaminated fish, vegetables and meat. Rice, fish, beef and other Japanese exports poisoned by nuclear power’s single worst nightmare is doubtless being consumed in the United States.

Gordon Edwards, President of the Canadian Coalition for Nuclear Responsibility, told CTVnews that the 1,000 Bq/kg allowance is dangerous. “It has to be recognized that even Health Canada acknowledges that even those levels correspond to an increased cancer risk of eight cancers per 1,000 people exposed over a 70-year period. So these are not safe levels, even by Health Canada’s own standards,” he said.

Cesium-137 and -134 — muscle-seeking isotopes that can cause cancers and other illnesses when ingested or inhaled — were and are being dumped into the atmosphere in huge quantities by Fukushima. An April 12, 2011 warning about food contamination from the Low Level Radiation Campaign in England said, “Vegetables and other foodstuffs showing more than 50 Bq/kg of cesium indicate airborne contamination with other radionuclides. LLRC advises food with more than 50 Bq/kg should not be eaten unless there’s absolutely no choice. We recommend that the Japanese government ask for international food aid supplies to prevent its people eating contaminated food.”

The Seattle Times reported last October that researchers found small amounts of Fukushima’s cesium in albacore tuna caught off the coasts of Washington and Oregon. The albacore warning followed the May 2012 and February 2013 findings of cesium-contamination in Blue fin tuna caught off California.

The Huffington Post said Aug. 28 that out of 170 types of fish tested in the Fukushima area, 42 species were put off limits. CBS News put it a little differently Aug. 20, noting that in the same region only 16 types of fish are considered safe to catch, compared with 150 types before the catastrophe. Japanese public television reported July 11 that sea bass were found with 1,037 Bq/kg, or ten times the allowed contamination. The Tokyo daily Asahi Shimbun noted Aug. 29, 2013 that a greeling had 25,800 Bq/kg cesium, an all-time record in the 2 ½ years since the radiation gusher began. Pacific cod and black sea bream had 3,300 Bq/kg.

Environmental radioactivity bio-accumulates as it climbs the food chain. Smaller species now under Japanese fishing bans — which are eaten by the big tuna — eat species that are smaller yet. So prize fish like tuna, which can live 30 years and are at the top of the food chain, will eventually be poisoned with far more than “trace” amounts of cesium.

Professor Ken Buesseler of the Woods Hole Oceanographic Institution says the seafloor is a major reservoir for Fukushima’s cesium. “It looks to me like the bottom fish, the fish that are eating, you know, crabs and shellfish, the kinds of things that are particle feeders — they seem to be increasing their accumulation of the cesium isotopes because of their habitat on the seafloor,” he told Science in Oct. 2012. The BBC reported Oct. 25, 2012 that flounder, conger, Pollock, rockfish, skate and the popular US imports cod, sole and halibut — all bottom feeders or demersal — “consistently showed the highest cesium counts.”

— A version of this article was published Oct. 23 by Counterpunch.