March 11 marks the seventh anniversary of the Great Eastern Japan Earthquake and tsunami that killed over 18,000 people. The quake destroyed the foundations and pipes of the Fukushima-Daiichi nuclear reactor complex, and caused a tsunami that crashed the site’s emergency back-up generators resulting in a “station blackout” and the world’s only simultaneous triple reactor meltdown. The consequent mass radiation releases, mass evacuations and mass contamination of the Pacific Ocean are unprecedented. Only the 1986 Chernobyl disaster compares to Fukushima, although its radiation was dispersed largely to the atmosphere rather than the sea.

One of the first books on the subject was Takashi Hirose’s Fukushima Meltdown: The World’s First Earthquake-Tsunami-Nuclear Disaster. This passage from the introduction is a reminder of the avoidable risks of operating nuclear reactors in earthquake zones:

“…the fact that there is no way of putting an end to earthquakes and tsunamis is … something that we must accept….

“However, the Fukushima Daiichi Nuclear Power Plant Disaster is neither a natural disaster nor ordained by fate. It is a human-made disaster brought about by bad faith. Unlike natural disasters, which are beyond human understanding, this was easily predictable and preventable. The officials of Tokyo Electric Power Co. [Tepco] say things like, ‘We could not imagine that a once-in-a-thousand-years earthquake might come,’ and ‘The tsunami was beyond our expectation,’ but these are only obfuscations. A major earthquake accompanied by a nuclear power plant accident was—as I will show in detail—something very much within the realm of possibility, a possibility these officials arrogantly refused to consider.

“If I, neither a scholar nor a specialist, was able to foresee this, and the nuclear power specialists from Tepco and from the government’s nuclear-related agencies were not, then for what do they exist?” 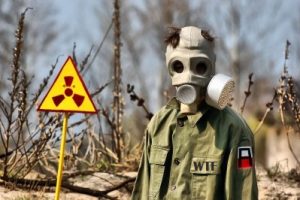 Japan’s disaster reconstruction minister announced at a press conference last July 15 that he opposes dumping contaminated cooling water from the disaster-struck Fukushima Daiichi site into the sea, citing protests by local fishermen. While the minister has no control over how the waste water will be disposed, his comments came after several experts endorsed the ocean dumping.

About 770,000 tons of waste water has been collected in over 900 densely crowded tanks on site, and the amount grows by 150 tons a day. With limited acreage Tepco officials have said it can keep adding tanks only until 2020, and the tank farm is vulnerable to earthquakes that could spill the waste.

The water becomes highly radioactive when it is poured over wreckage inside the three reactors in order to cool the three masses of “corium”—the hot uranium fuel and its cladding melted into a giant mass that has partially burned through the foundations. Most of the water is then treated in an experimental process that removes many radioactive materials but not the tritium, the radioactive form of hydrogen.

Reconstruction minister Masayoshi Yoshino spoke shortly after Takashi Kawamura, chairman of Tepco Inc., which owns the reactors and caused the catastrophe, said in an interview that the decision to dump the contaminated water “has already been made.”

Kawamura’s remarks were widely condemned and a Tepco spokesperson made a retraction saying, “The chairman meant to say that the decision to release is not yet final.” Minister Yoshino also asked dumping advocates “not to drive (fishermen) further towards the edge,” alluding to concern among local fishermen about the effects on their livelihood if the fish and other marine products they catch were to be contaminated.

Reporting about the millions of gallons of radioactive waste water accumulating at the Fukushima site, major media have called tritium harmless. Kyodo News Service said last July: “Tritium is a radioactive substance considered relatively harmless to humans.” The London Independent said last November, “Treatment has removed all the radioactive elements except tritium, which they say is safe in small amounts.” The Institute for Energy and Environmental Research (IEER) notes that these assertions directly contradict the US Environmental Protection Agency’s Fact Sheet on tritium. That fact sheet says tritium is one of the “least dangerous radionuclides” but reminds readers that “As with all ionizing radiation, exposure to tritium increases the risk of developing cancer.” IEER notes, “The established science is that there is no threshold for cancer risk of radiation and therefore no level of exposure is ‘safe.’”

Tepco still knows so little about the state of the deadly melted fuel inside the three reactors that the most the company could say in January about its latest remote-controlled probe inside Unit 2 was, “the radiation reading [8 Sieverts] was taken near what appeared to be fuel debris.” (emphasis added). The harsh radiation environment inside the wrecked reactors is so novel and deadly that robotic probes and containment equipment haven’t yet been devised and have to be invented whole cloth. Seven years in, Tepco hasn’t yet positively located the melted fuel debris inside all three reactors.

What surprised the January inspectors was a reading of 42 Sieverts per/hour “outside the foundations of the reactor.” Mycle Schneider, an energy consultant and lead author of the World Nuclear Industry Status Report, told the Independent, the company “hasn’t a clue what it is doing,” in decontaminating and securing the complex.

Richard Black, director of the Energy and Climate Intelligence Unit, said that the high radiation reading from outside the foundations is “more of a concern as the cause is at present unclear.” Schneider said more directly, “I find it symptomatic of the past seven years, in that they don’t know what they’re doing.”

* For a detailed review of the ongoing Fukushima catastrophe, see “Key figures for the seventh anniversary,” published Feb. 17 by the group ACROnique Fukushima. The group offers daily monitoring of events related to the current radiation disaster in Japan, and more.

** For an excellent analysis of the dangers of exposure to tritium, see author Dahr Jamail’s Aug. 2017 report “Fukushima Plant Is Releasing 770,000 Tons of Radioactive Water Into the Pacific Ocean.”