The annual goldmine of empirical data on nuclear power that is the World Nuclear Industry Status Report (WNISR) was unveiled on October 5 in Berlin. The 2022 edition is available for download and is an indispensable reference source.

Beyond its in-depth overview of the status of nuclear power worldwide, the report also provides sections focused on particular areas of the technology or on certain countries or regions of the world.

As its principal author Mycle Schneider pointed out during the rollout, the report’s co-authors are fans of empirical data. Many of the findings in the report are taken from the nuclear industry itself. Facts and physics are pretty much immutable when it comes to nuclear power, and neither favors the industry very well. No amount of industry aspirational rhetoric can hide the truth about a waning and outdated technology.

The over-riding finding of the WNISR is that nuclear power’s share of global commercial gross electricity generation in 2021 dropped to below 10 percent for the first time ever, sinking to its lowest in 40 years.

[Journalist Elisa Serret on Radio Canada noted that this is a 40 percent drop from 1996, when nuclear’s share of global electricity generation peaked at 17.5 percent.]

As in past years, if you take China out of the picture — a country with 21 new reactors under construction as of mid-2022 — the decline of nuclear power worldwide is even more dramatic.

At close to 400 pages, the WNISR is a tome, but it is packed full of essential detail on every important topic related to nuclear power and its decline.

Whether you are interested in new reactors or closures, decommissioning or small modular reactors, the world or a specific country, there is something in the report that will flesh out the details.
In addition, there is an important chapter — Nuclear Power and War — dealing with the fate of nuclear reactors caught up in the Russian invasion of Ukraine and the warfare that is exploding around them.

We have of course been talking, writing, and warning about the perils of reactors in a war zone since the time a Russian invasion was first intimated late in 2021. But the WNISR helpfully lays out all the possible causes and consequences of a nuclear disaster in Ukraine. It answers the many questions we have about the robustness, or not, of reactors, fuel pools, and radioactive waste casks to withstand and survive a bombardment or even a prolonged power outage.

As former IAEA director of nuclear safety, Aybars Gurpinar told Bloomberg when addressing the risks to reactors in Ukraine: “Even if structures are extremely well designed, you cannot expect them to withstand a military-style attack. They are not designed for this.” 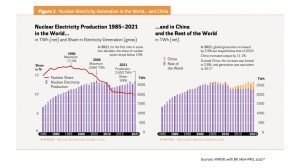 “Nuclear power plants are immediately vulnerable in war situations. This is directly due to the constant and permanent need for cooling. Extensive failure of the necessary electrical power or destruction of the cooling systems would lead to overheating of the reactor core. It is relatively unimportant whether this damage is intentional, unintentional, or of indeterminate cause and motivation.

“On the other hand, with increasing duration, the specific stress on the personnel and poorer maintenance worsens the operating conditions which also increases the probability of triggering serious accidents.”

In addition to covering the most obviously disastrous impacts, such as loss of coolant leading to fires and meltdowns, the report also explores some of the other essentials that could be lost during war but that are less often discussed.
These include lack of access to the site due to the destruction of roadways; absence of diesel fuel supplies for backup generators; the continued presence of a fire department with necessary equipment and access; the availability of skilled operating personnel and the consequences of staff working under duress or takeover; and the necessity of continued maintenance, repairs, and inspections.

These add to the already long list of technical things that could go wrong at a reactor under war conditions. This makes it particularly important to focus on the prevention of such a disaster, rather than speculating about who is at fault.

Speculation is not to be found in the WNISR. Accordingly, the authors chose to point out in conclusion that the news reports, about who is firing on what and why, are not necessarily reliable. All they, and we, can assess, is what the damage might be and what the consequences of that damage could lead to.

“In a war situation, it is particularly difficult to verify whether certain reports cover indisputable facts, are exaggerated, or false,” the WNISR authors write. “The warring parties, as well as organizations and individuals interacting with them, have an interest in a representation that is not necessarily objective.”

Wars will happen, and the fog of war will mask and confuse what is actually going on. But the one abiding problem is the nuclear reactors being there in the first place. And that’s the one thing we do have the power to change.