On February 20, the Department of Energy (DOE) finalized an unprecedented $6.5 billion in combined loan guarantees — with a $0 down payment — for companies building two new reactors at the Vogtle nuclear power station in Georgia, waiving the usual “credit subsidy fee” borrowers pay to protect taxpayers from losses in the event the project is not completed.

The Vogtle reactors would be the first new nuclear power generators built from scratch in the US in over three decades and would use an untested Westinghouse AP1000 design. Slated to begin operating in 2017 and 2018, the reactors are now expected to cost the utility and its ratepayers at least $15 billion.

Sara Barczak of the Southern Alliance for Clean Energy expressed her group’s frustration with the DOE’s decision, saying, “We are astonished that utility giant Southern Company is getting an amazing sweetheart deal with basically no [financial] protections for taxpayers. It is outrageous that the DOE and Office of Management and Budget somehow determined that the two reactors under construction at Plant Vogtle pose less of a risk of default today than they did four years ago. Have these agencies been living under a rock? Fukushima has happened, natural gas prices have fallen, nearly all other new reactor projects have vanished and, most importantly, the Vogtle expansion is 21 months behind schedule, more than $1 billion over budget and has a large outstanding lawsuit of nearly another billion dollars between Southern Company and Westinghouse. How that, together, doesn’t constitute an unacceptable risk to taxpayers is baffling.”

The letters confirming the terms of the loan agreement were obtained in April through a Freedom of Information request made by Energy & Environment News. The letters were addressed to executives at Southern Co. subsidiary Georgia Power, which owns a 45.7 percent share of the project and received a $3.5 billion loan, and to Oglethorpe, which owns 30 percent and received $3 billion. The third project partner, Municipal Electric Authority of Georgia (MEAG), owns 22.7 percent and is still waiting for approval of its $2 billion loan request as of May 14. 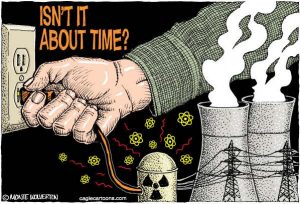 As demand for electricity has fallen in past decades, the number of nuclear reactor projects abandoned before completion has grown, making private lenders question whether nuclear power is a good investment. To keep the nuclear industry alive, Congress in 2005 authorized the use of federal funding as backing for nuclear project loans under the Energy Policy Act — shifting much of the investment risk to taxpayers. Still, reactor builders have backed away from new construction projects.

In 2010, Constellation Energy Group (now owned by Exelon Corp.) abandoned plans for a new reactor at Calvert Cliffs in Maryland after the DOE asked for $880 million in upfront payments to protect against default before issuing a loan guarantee.

Nuclear power critics have suggested that the DOE, guided by President Obama’s “all of the above” energy policy that supports the nuclear industry, issued the $0 credit subsidy fee for Vogtle out of fear that a down payment would kill the project — even though Southern Co. officials have repeatedly stated that they could build the project without the government-backed loan. DOE officials claim they used a standard formula to calculate the fee, finding the established companies to be a low-risk investment. The fact that Georgia’s regulated markets make utilities into monopolies without competition probably also helped, as well as the fact that Georgia customers are required by law to pay for construction costs.

Once the MEAG Vogtle loan is finalized, the DOE anticipates that it will have $10.2 billion in remaining nuclear authority — enough to support one more nuclear reactor project. — ASP