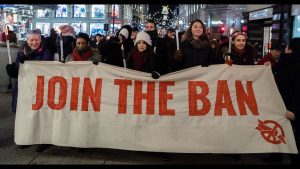 “The US should work with the other nuclear armed countries to eliminate all nuclear weapons from all countries, in line with the new treaty.” (On July 7, 2017, 122 countries voted for the adoption of the Treaty on the Prohibition of Nuclear Weapons at the United Nations.)

If you agree, your opinion aligns with 49% of US adults polled by YouGov* on behalf of NuclearBan.US [a treaty compliance campaign]. Likewise, 30% of people identifying as Republican, 52% of women, 56% of Hispanics, and 53% of those over 55 years believe that the US should support the 2017 Treaty on the Prohibition of Nuclear Weapons (TPNW).

While it may be surprising to realize there are so many in the United States that agree, this 49% is part of the world majority. The recently released 2019 Nuclear Ban Monitor  finds 135 countries already following the word of the treaty even though turning that into official policy is a work in progress. Currently, there are 80 signatories, meaning the nations refuse to do anything contradictory to the treaty’s object and purpose. There are 34 countries (formally called “States Parties”) that have ratified the ban, meaning they are legally bound by its requirements. With these numbers steadily climbing, the TPNW is expected to enter into force soon, when 50 nations have ratified which will make nuclear weapons illegal under international law.

In the United States, while the federal administrations of Obama and Trump have actively opposed the ban, the TPNW has advanced through several major campaigns including Don’t Bank on the Bomb, Back from the Brink and Warheads to Windmills: How to pay for a Green New Deal (by Timmon Wallis). Grassroots pressure is taking money away from the bomb by urging financial institutions to divest. Don’t Bank on the Bomb released its 2019 report Beyond the Bomb on October 17, documenting 77 financial institutions that have restricted investments in nuclear weapons producers. This number has more than doubled since 2014 when the annual report first appeared. Thirty-six of the 77 institutions have a comprehensive policy preventing any involvement in nuclear weapon producing companies, denying them access to over $1,700 billion in funds.

Back from the Brink is a campaign offering organizations and institutions a way to express support for the TPNW through their Call to Prevent Nuclear War resolution. To date endorsements have come from four state government bodies, including the California and Oregon state legislatures, and the Maine state senate and New Jersey state assembly, 39 municipalities, such as Tucson, Arizona, Honolulu, Hawaii, Washington, DC, and most recently Portland, Oregon, and over 260 environmental, faith, peace, health and academic organizations like Hip Hop Caucus, Soka Gakkai International, the Islamic Society of Boston Cultural Center and 350.org.

Taking compliance with the Treaty Ban one step further is NuclearBan.US, the organization that coordinated the previously-mentioned poll. The group promotes both the Treaty Ban and the Green New Deal by linking them through its Warheads to Windmills campaign. By becoming compliant with the Nuclear Ban Treaty, “the money saved can be redirected to green technologies for [facing] the climate crisis.”

While the governments and weapons manufacturers try to ignore the Ban Treaty, a clamor from below continues to grow.

* All figures, unless otherwise stated, are from YouGov.com, a British internet-based research and data analytics firm. Total sample size was 1355 adults. Fieldwork was undertaken between Sept. 20 and 23, 2019. The survey was carried out online. The figures have been weighted and are representative of all US adults (aged 18+).