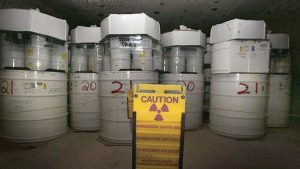 Hundreds of radiation clean-up workers were running for their lives Tuesday, May 9, when a “highly contaminated” waste storage tunnel collapsed at the Hanford Reservation in Southeastern Washington State.

The US Energy Department ordered workers to “take cover” after  what it called a “cave-in” of a tunnel used to store highly radioactive  nuclear weapons wastes, some of it 72-years old and still ferociously carcinogenic. The earthen tunnels, near the so-called Plutonium Uranium Extraction (PUREX) area, were like berms and built above ground as a sort of radiation shielding system.

The Washington Post reported May 9: “Energy Department officials said there was ‘no indication of a release of contamination at this point’ but that crews were still testing the area.”

This is a typically vague assurance, the sort that follows radiation accidents of all kinds. Before emergency teams are even finished looking, officials make a soothing, highly nuanced statement. “No indication … at this point” should be read to mean: “We checked upwind of the dust cloud, so our meters would not register any radiation.”

The Hanford workers who ran for cover might have been panicked with memories of the Oct. 18, 2015 explosion and fire at a radioactive waste dump Beatty, Nevada. In that case buried, unknown sorts of radioactive waste reacted with rainwater that had seeped through both the waste trench’s earth covering, and through waste containers, causing five explosions and a plume of smoke and debris. The nuclear fireworks were actually caught on cellphone video. They may remember when 24 onsite workers inhaled the poison when a drum of weapons waste with plutonium exploded underground in Carlsbad, New Mexico on Valentine’s Day 2014.

DOE officials at Hanford asked the Federal Aviation Administration to put a temporary flight restriction over the area, the Post reported, most likely because of fears of a similar radioactive plume drifting from the cave-in. Former Energy Department official Robert Alvarez told the Post, “the tunnels now store contaminated train cars and a considerable amount of highly radioactive, ignitable wastes including possible organic vapors.”

Alvarez was understated when he told the Post the Hanford site is “a very high-hazard operation.”

Like the waste in Nevada, much of the toxic and radioactive junk at Hanford is “uncharacterized” and unlabeled, meaning cleanup workers can’t know either what sorts of deadly isotopes are in the wastes, or what radiation hazards might be present. Left over from the nuclear arms race with the former USSR, much of the radioactive waste material at Hanford is so radioactively and thermally hot that it’s a misnomer to call that period a cold war.

Nine plutonium production reactors ran onsite for 50 years. The last was shut down in 1988, and Hanford’s been a stop-and-start clean-up operation since 1989. Projected cost estimates for final abandonment and “good enough” declarations (no one suggests that the area can be reclaimed to the point that it can be inhabited) were once around $80 billion, but now run to $350 billion.

Over three billion gallons of groundwater beneath the 580 square-mile site have been poisoned with plutonium, uranium, americium, neptunium and dozens of other “trans-uranic” (worse than uranium) wastes. The groundwater drains to the nearby Columbia River, a drinking water source for tens of thousands in Oregon and Washington.

Hanford hosts 177 giant underground liquid waste storage tanks, which contain some 2.5 million gallons of radioactive sludge, stuck at the bottom. The tanks were filled with 56 million gallons of high-level or plutonium-contaminated wastes from the PUREX plant near where the “cave-in” took place. Most reports say the tanks “hold” 56M gallons” but as early as 1990 the DOE has acknowledged that 66 of them were leaking.

The PUREX facility was used for decades to produce plutonium for bombs from hot uranium fuel rods taken from the nine “production” reactors. Plutonium — the most toxic material currently known to science — was extracted using a gigantic “chemical bath” system involving harsh acids and chemicals, miles of piping and conduit inside cavernous buildings employing tens of thousands of workers — thousands of whom were exposed to deadly amounts of radiation.  McClatchy Newspapers reported in 2015 that at least 33,000 such workers died of cancers caused by their workplace radiation doses. The actual number is probably much higher.