The first unprecedented and controversial shipment of high-risk, highly radioactive liquid waste from Canada arrived at the Savannah River Site (SRS), according to the Defense Nuclear Facilities Safety Board (DNFSB). The handling of the first armed convoy faced problems at SRS due to inadequacies in a container designed to shield workers from radiation.

A DNFSB report found that, “After loading …, radiological protection (RP) [personnel] identified an unexpected hotspot on the side of the pig indicating that the pig was not providing adequate radiological shielding. RP labeled the hotspot before H-Canyon personnel relocated the pig so the hotspot would be facing the wall. H-Canyon personnel did not identify any similar issues on the other pigs and are planning to use the one spare ‘pig’ for future evolutions,” ‘pig’ being an in-house term for the outer hauling container. 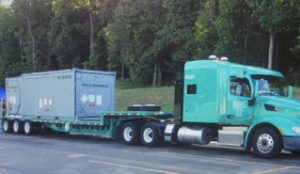 A truck and a container like the one used in an unprecedented high-risk experimental shipment of high-level radioactive waste in liquid form from Chalk River, Ontario to Savannah River, South Carolina.

In response to the report of faulty shielding of workers from radiation exposure, SRS Watch filed a Freedom of Information Act request for more information.

The waste is from medical isotope production at Chalk River National Labs in Ontario, and contains a host of highly radioactive fission products. Once processed to remove uranium in the 61-year-old “H-Canyon” complex, newly resulting waste is to be dumped into nearly antique waste tanks at SRS. The Canadian liquid waste consists of about 6,000 gallons stored in the so-called Fissile Solution Storage Tank at Chalk River, and is to be shipped using up to 150 overland transports via unspecified routes from Canada to SRS.

The US Energy Department kept this first shipment secret, as well as the radioactive hotspot that was discovered on the shipping cask, but watchdog groups alerted the press and public.

In February this year, environmental groups including SRS Watch, Beyond Nuclear and the Sierra Club lost a federal lawsuit urging DOE to prepare a full Environmental Impact Statement on the shipments. The court found no need for an in-depth analysis of transport risks, impacts of processing and disposal at SRS, or alternative methods of managing the waste in Canada. The groups argue that doing the “downblending” of the highly enriched uranium in the liquid waste in Canada, and then solidifying it there, is the best option from nuclear non-proliferation and environmental perspectives.

This government-backed downblending option has been proven viable with the processing of similar liquid nuclear waste in Indonesia.

“For both non-proliferation and environmental reasons, the best option remains management of this liquid high-level waste in Canada,” said Tom Clements, director of SRS Watch, an independent oversight group. “The unprecedented and unjustified import of the highly radioactive liquid waste from Canada to SRS will only place an additional burden on aging SRS waste tanks and slow down the urgent removal of waste from those tanks.”

“The incident with the handling of the Canadian waste on its arrival at SRS gives the … team a black eye for flubbing the very first shipment after years of preparation,” Clement said.