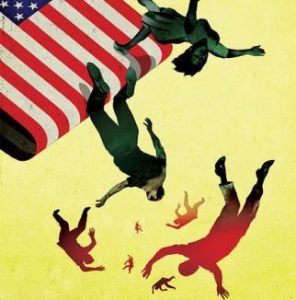 4 The US began drone strikes in Yemen in 2002 but the major fighting began when Saudi Arabia intervened in March 2015.

12 Department of Defense Casualty Report https://dod.defense.gov/news/Casualty-Status/. Figures include deaths in other operational locations.

13 Estimate based on United States Department of Labor (DOL) (2019). Defense Base Act Case Summary by Nation. Retrieved from: https://www.dol.gov/owcp/dlhwc/dbaallnation.htm (data through September 30, 2019). The figure given here is an estimate of total contractor deaths based on DOL numbers, namely the additional number of unreported contractor deaths by comparing the percentage of foreign contractors working for the US military in the warzone with the much lower percentage of foreign contractors among the reported contractor dead. The multiplier reflecting this disparity is 2.15 times the DOL number. DOL data for contractor deaths: Afghanistan, 1,774; Pakistan, 42; Iraq, 1,669; Syria, 8; Yemen, 1.

14 This does not include the estimated 150-200 Russian security contractors who have been killed between October 2015 and December 2017; Nemtsova, Anna (2018, January 2), “A Russian Blackwater? Putin’s Secret Soldiers in Ukraine and Syria.” The Daily Beast.

17 There is uncertainty about the number of Afghan National Police and military deaths. This estimate is based on several sources. In September 2013, US General Joseph Dunford said that more than 100 Afghan Security Forces were being killed a week. Harrison, Emma Graham (2013, Sept. 2), “Afghan Forces Suffering Too Many Casualties Says Top NATO Commander,” The Guardian, retrieved from https://www.theguardian.com/world/2013/sep/02/afghan-forces. In March 2014, The New York Times reported 13,729 Afghan National Security and Police deaths from 2001 to 2014. Nordland, Rod (2014, March 3), “War Deaths Top 13,000 in Afghan Security Forces,” The New York Times, retrieved from https://www.nytimes.com/2014/03/04/world/asia/afghan-cabinet-releases-data-on-deaths-of-security-personnel.html?partner=rss&emc=rss&smid=tw-nytimes&_r=0. In January 2017, the Special Inspector General for Afghanistan Reconstruction (SIGAR) reported 6,785 Afghan National Defense and Security Forces (ANDSF) killed from January 1, 2016 to November 12, 2016, a rate of about 147 per week.: https://www.sigar.mil/pdf/quarterlyreports/2017-01-30qr.pdf. In September 2018, Afghan President Ashraf Ghani said 28,529 Afghan security forces had been killed since 2015. Fahim Abed and Rod Nordland, “Afghan War Casualty Report: Nov. 9-15” The New York Times, https://www.nytimes.com/2018/11/15/magazine/afghan-war-casualty-report.html?module=inline. In January 2019, President Ashraf Ghani said that there have been 45,000 security personnel killed since he took office in September 2014. See BBC (2019, January 25), “Afghanistan’s Ghani says 45,000 Security Personnel Killed Since 2014,” BBC News, https://www.bbc.com/news/world-asia-47005558. Assuming that 100 Afghan ANSDF were killed each week from April through August 2014, this adds an additional 2,000 deaths. The New York Times reported 3,395 Afghan security force deaths for the period January 1, 2019 to October 31, 2019. Fahim Abed, “Afghan War Casualty Report,” The New York Times for each week from January 1 to October 31, 2019. US Forces in Afghanistan began to classify these numbers in 2017 after previously releasing them. See Thomas Gibbons-Neff (2017, October 30), “Afghan War Data, Once Public, is Censored in U.S. Military Report,” The New York Times, retrieved from https://www.nytimes.com/2017/10/30/world/asia/afghanistan-war-redacted-report.html, and Rod Nordland (2018, September 21), “The Death Toll for Afghan Forces is Secret. Here’s Why,” The New York Times, retrieved from https://www.nytimes.com/2018/09/21/world/asia/afghanistan-security-casualties-taliban.html. In December 2017, the DOD reported that the “number of ANDSF casualties suffered while conducting local patrols and checkpoint operations was similar to that of 2016,” while “the number of casualties in planned operations has decreased over the same period.” See Department of Defense, “Enhancing Security and Stability in Afghanistan”: https://media.defense.gov/2019/Jul/12/2002156816/-1/-1/1/ENHANCING-SECURITY-AND-STABILITY-IN-AFGHANISTAN.PDF. See Special Inspector General for Afghanistan Reconstruction (SIGAR), “Quarterly Report April 30, 2018”: https://www.sigar.mil/quarterlyreports/index.aspx?SSR=6. Also for trends see, Livingston, I.S., and M. O’Hanlon (2017), Afghanistan Index, Figure 1.15, p. 12. Brookings, retrieved from https://www.brookings.edu/afghanistan-index/. See also Crawford, Neta C (2015, May 22), “War Related Death, Injury and Displacement in Afghanistan and Pakistan 2001-2014”, Costs of War, retrieved from https://watson.brown.edu/costsofwar/files/cow/imce/papers/2015/War%20Related%20Casualties%20Afghanistan%20and%20Pakistan%202001-2014%20FIN.pdf.

19 Through late 2017. The data on Iraqi military and police killed since 2003 has been imprecise since the war began. See Fischer, Hanna (2011). “Iraq Casualties: U.S. Military Force and Iraqi Civilians, Police, and Security Forces,” Congressional Research Service, retrieved from https://www.hsdl.org/?view&did=718381. The UN Assistance Mission in Iraq halted its own reporting on military casualties in December 2016. See United Nations (2016, December 3). “UNAMI Statement in Response to Criticism on Reporting  Military Casualties,“ retrieved from
http://www.uniraq.org/index.php?option=com_k2&view=item&id=6457:unami-statement-in-response-to-criticism-on-reporting-militarycasualties&Itemid=605&lang=en. This estimate is based on the Project on Defense Alternatives estimate of 11,000-15,000 Iraqi military fatalities in  the initial fighting in 2003; the Brookings Institution Estimate of 10,521 Iraqi Military and Police fatalities from June 2003 to 2011; and the Iraqi Interior Ministry statement in December 2017 that more than 26,000 Iraqi soldiers and military personnel were killed in the war against ISIS. See Conetta, Carl (2003, October), “The Wages of War: Iraqi Combatant and Noncombatant Fatalities in the 2003 Conflict,” Project on Defense Alternatives. Retrieved from http://www.comw.org/pda/fulltext/0310rm8.pdf. See also O’Hanlon, M. and I.S. Livingston (2013), Iraq Index: Tracking Variables of Reconstruction and Insecurity in Iraq, Brookings Institution Reports, retrieved from: https://www.brookings.edu/wp-content/uploads/2016/07/index20130726.pdf. Aboufadel, Leith (2017, December 13). “Over 26,000 Iraqi Soldiers Killed in 4 Year War with ISIS,” Almasdar News, retrieved from https://www.almasdarnews.com/article/26000-iraqi-soldiers-killed-4-year-war-isis/. Agence Presse France gives a total from August 2012 of 816 army and policy deaths, using Iraqi government figures. See AFP, retrieved from https://docs.Google.com/spreadsheet/ccc?key=0Aia6y6NymliRdEZESktBSWVqNWM1dkZOSGNIVmtFZEE#gid=4. This estimate is consistent with the 8,825 deaths recorded by iCasualties, http://icasualties.org/, for January 2005 to July 2011. Moreover, this is an amorphous category— in various periods of the fighting, some local militias work with the Iraqi police and military.

20 From Reports by the Syrian Observatory for Human Rights, http://www.syriahr.com/en/.

21 Included in opposition fighters total, below.

23 There are troops from about 20 different state and non-state actors engaged in this war. About 11,000 Kurdish allies of the US have been killed since 2015 175 Russian soldiers have died in Syria since September 2015 through 2018 according to BBC Russia (2019, January 9), “Russia Covered up Soldier’s Death in Syria, Media Reports,” The Moscow Times.

24 For 2001-2007, see Crawford, Neta C. (2015, May 22). “War Related Death, Injury and Displacement in Afghanistan and Pakistan 2001-2014,” Costs of War, retrieved from https://watson.brown.edu/costsofwar/files/cow/imce/papers/2015/War%20Related%20Casualties%20Afghanistan%20and%20Pakistan%202001-2014%20FIN.pdf; for 2008-2019, see the United Nations Assistance Mission in Afghanistan (UNAMA) annual Reports on the Protection of Civilians in Armed Conflict, retrieved from  https://unama.unmissions.org/protection-of-civilians-reports. These civilian death numbers include the recorded direct violent deaths. Additional direct violent deaths may not have been recorded and significant numbers of indirect deaths due to displacement or destruction of infrastructure have not been included.

25 Through June 2019. Pak Institute for Peace Studies (PIPS) annual Pakistan Security Reports. Retrieved from http://pakpips.com/. This data is mostly consistent with South Asia Terrorism Portal, “Fatalities in Terrorist Violence in Pakistan 2003-2018,” retrieved from www.satp.org/satporgtp/countries/pakistan/database/casualties.htm. The counts of the dead (and wounded) are complicated not only by the difficulty of access to war zones for investigators, but also because some actors have incentives to either exaggerate or to minimize the number of civilians killed, or to identify civilians as militants.

27 From reports by the Syrian Observatory for Human Rights, http://www.syriahr.com/en/. This is the estimate from October 2014 to October 2015. More than 110,000 of these were civilians, according to the Syrian Observatory for Human Rights, http://www.syriahr.com/en/. See “About 522 Thousand People Were Killed in 90 Months Since the Start of the Syrian Revolution in March 2011,” September 13, 2018, retrieved from http://www.syriahr.com/en/?p=102385. See also AFP, (2018, March 12), “Syria War Has Killed More than 350,000 in 7 Years: Monitor,” retrieved from http://www.dailymail.co.uk/wires/afp/article-5490129/Syria-war-killed-350-000-7-years-monitor.html. In August 2018, the US acknowledged that it killed at least 1,114 civilians in the fight against ISIS in Iraq and Syria since the US intervention there in August 2014. Daragahi, Borzou (2018, September 27), “Pentagon Admits War on Isis has Killed More Than 1,100 Civilians in Syria and Iraq,” The Independent, retrieved from  https://www.independent.co.uk/news/world/middle-east/syria-war-isis-iraq-pentagon-civilians-killed-air-strikes-inherent-resolve-coalition-a8558671.html. Worse, there are potentially thousands of bodies buried in rubble from bombardment in Iraq and those deaths may never be recorded. See Cockburn, Patrick (2017, July 19), “The Massacre of Mosul: 40,000 Feared Dead in Battle to Take Back City from ISIS as Scale of Civilian Casualties Revealed,” Independent, retrieved from https://www.independent.co.uk/news/world/middle-east/mosul-massacre-battle-isis-iraq-citycivilian-casualties-killed-deaths-fighting-forces-islamic-state-a7848781.html. Some of the most consistent reporting of casualties caused by Coalition and Russian air strikes is at: https://airwars.org/news-and-investigations/the-uncounted/.

29 Neither the US or NATO have released figures on the exact number of anti-government insurgents killed. From July 1 through November 5, 2019, Afghan National Defense Forces reported killing 10,259 militants/insurgents/terrorists. https://mod.gov.af/en/press-release. See also Crawford, Neta C. (2015, May 22). “War Related Death, Injury and Displacement in Afghanistan and Pakistan 2001-2014,” Costs of War, retrieved from https://watson.brown.edu/costsofwar/files/cow/imce/papers/2015/War%20Related%20Casualties%20Afghanistan%20and%20Pakistan%202001-2014%20FIN.pdf.

31 Estimating that about 9,200 Iraqi soldiers (plus or minus 1,600) were killed in 2003 resisting the US invasion and initial occupation and that about 19,000 militants were killed from 2003 to September 2007, Iraq Body Count found 20,499 “enemy” deaths in Iraq War Logs, from January 2004 through December 2009. See Conetta, Carl (2003, October 20), “The Wages of War: Iraqi Combatant and Noncombatant Fatalities in the 2003 Conflict,” Project on Defense Alternatives Research Monograph, #8; and Michaels, Jim (2007, September 27), “Thousands of Enemy Fighters Reported Killed,” USA TODAY, retrieved from http://www.usatoday.com/news/world/iraq/2007-09-26-insurgents_N.htm#. Iraq Body Count (2010, October 23), “Iraq War Log Analysis: What the numbers reveal,” retrieved from https://www.iraqbodycount.org/analysis/numbers/warlogs/. Agence France Press cites Iraqi sources as saying 14,239 militants were killed from January 2006 through January 2015. See https://docs.google.com/spreadsheets/d/1qx5xfgQVNNcJosG_EN8m3D2RRkJNpRbLsVKWdYAxKvA/edit#gid=4. We add an estimated average of 500-1000 militants killed each year from January 2015 to October 2018.

32 From Reports by the Syrian Observatory for Human Rights, http:/www.syriahr.com/en/, not including the estimated 11,000 Kurds killed fighting alliance with the US.