United we can stop the planned nuclear bomb!

Please join the German campaign to send the existing U.S. nuclear weapons back home, and to halt production of the new B61-12 nuclear bomb, scheduled to be built in the U.S. by 2020 and deployed in five European countries—Italy, Belgium, Holland, Turkey, and Germany.

We invite anti-nuclear, environmental peace and human rights activists to our peace camp July 08-to-16, 2019, at the main gate of the Büchel Air Base in Germany with emphasis on young people! The international Action Camp is part of our 20 weeks of action from March 26th to August 9th (Nagasaki memorial day). Twenty weeks represent the 20 B61 H-bombs still at Büchel AB. Our peace camp includes networking, vigils, and nonviolent civil resistance.

The international week will be the third uniting Europen activists with anti-nuclear resistance in the U.S.—the country where construction of the bomb is taking place. In 2018, 10 activists from the U.S. joined together with dozens from Holland, Belgium and France, and the International Youth Group from Mutlangen, Germany. On July 17, 2017  US delegates personally delivered a copy of the new Nuclear Weapons Treaty Ban to the commander of the air base.

Please join over 400 internationals that have signed our “Declaration of Solidarity.” 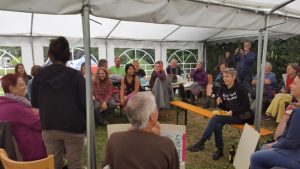 Despite the end of the Cold War, about 20 U.S. nuclear bombs are still deployed at Germany’s Büchel air force base. German pilots are both trained and obligated to take off with these bombs in their Tornado jet fighter-bombers and, if the orders come from a U.S. president through NATO, to use them on their targets. This horrifying war plan is part of the “nuclear sharing agreement” between the US and Germany, and includes a first-strike option. NATO calls this proliferation “Power and Burden Sharing.”  In addition nuclear exercises next to the east European Russian border—for example Anaconda—with tens of thousands of soldiers and military equipment movements, have taken place recently.

These weapons of mass destruction—illegal under German, U.S. and international law—are scheduled to be replaced by expensive (a $10 billion program), new, precision-guided nuclear weapons—the B61-12—in the near future, through the National Nuclear Security Administration’s “modernization” program.

Three US National Laboratories—Los Alamos and Sandia in New Mexico, and Lawrence Livermore in California—have worked to design the B61-12, and parts are being made at the Y12 complex in Tennessee, the Kansas City Plant in Missouri, and at Sandia. Final assembly is set for the Pantex site in Texas. Major contractors are Boeing, Lockheed-Martin, Honeywell, and Bechtel. Hans Kristensen of the Federation of American Scientists has reported that the 400 new B61-12s planned for Europe will cost at least $25 million apiece.

The military industrial complex, together with major political parties, continue this destabilizing nuclear weapons enhancement in spite of popular resistance.

The planned B61 replacement is going on despite Germany’s  overwhelming approval March 26, 2010 of a cross-party (bipartisan) resolution by the Bundestag calling on the government to pursue permanent removal of the Cold War nuclear bombs.

Germany is the only country inside Europe that has a nationwide campaign of 54 groups and organizations (called Büchel is everywhere—Nuclear weapons-free now!) with the focus on nuclear abolition and civil resistance at the scene of crime. We believe that besides lobby work, we also have to increase awareness and political pressure using nonviolent direct action to halt the B61 replacement.

Because of public interest (a 2016 poll shows that about 90% of the German public is against the US nukes) our united coalition work — which includes well-respected organizations like IPPNW, IALANA, the German Fellowship of Reconciliation, Pax Christi, and DFG-VK, etc. — led to the political decision to de-criminalize participation in nonviolent blockades at Büchel.

Finally, the global nuclear weapons Ban Treaty has been signed at the United Nations by 67 countries, and on Oct. 6, 2017 the International Campaign to Abolish Nuclear Weapons, the Treaty’s principle proponent, received the Nobel Peace Prize. Our German political decision makers refused to take part in the negotiations for the Treaty Ban and have refused to sign it — following the bad example of the United States, most NATO members, and all the other nuclear-armed states. Since  July 2017, leaders of 122 countries, thousands of civil society groups and NGOs, and religious leaders including Pope Francis have criticized the nuclear weapons nations for not signing on to the Treaty.

In 2017, during Germany’s nationwide election campaign, Social Democrat Party leader Martin Schulz promised he would demand removal of the nuclear weapons if he became Chancellor — and Germany’s Foreign Minister Sigmar Gabriel publicly endorsed Schulz’s promise at a Washington, DC press conference with US Secretary of State Rex Tillerson. Also, the Left Party called for a parliamentary decision to remove the B61s (unfortunately dismissed), and the Greens have permanent removal of the bombs as part of their party platform. These parties need to be pressured to take further actions to oust the US bombs. Politicians know that when Germany steps out, it will effect future decisions of the four other “nuclear sharing” countries (Belgium, Holland, Italy and Turkey). A “domino effect” is possible, so the best time to stop the B61-12 program is now — before it goes into production. 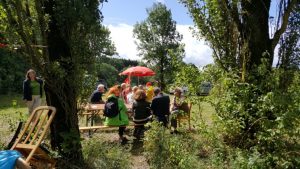 20 Weeks of Action for 20 Bombs at Büchel

In 2016, 2017 and in 2018, we had 20 weeks of actions with over 50 religious, peace, women’s, anti-nuclear and other groups participating. Starting again on March 26, 2019, and continuing through August 9, groups and individuals will hold vigils and other kinds of nonviolent direct actions (blockades, go-ins, vigils  etc.) at the Büchel Air Base to pressure the government and remind lawmakers of their promise to permanently eliminate the US warheads.

When we take part in nonviolent direct action, we will not use or threaten to use physical violence against any person, especially in situations where violence is being used against us. No participant in the action will hold another person against their will, push them or injure them in any way. We will not behave insultingly or humiliate others. Rather we wish to treat others (police, soldiers, counter-demonstrators and everyone) with respect, even as we criticize the actions they take.

This also remains valid when it comes to legal proceedings as a result of our actions, during which we will behave with solidarity toward one another. The complete agreed framework for action can be found on our homepage in German: www.buechel-atombombenfrei.de

The core element of the campaign is our “Declaration of Commitment” signature gathering effort, where people declare in public (on our website):

“I will come Büchel once a year and take part in an action until nuclear weapons are withdrawn, and I will actively commit to seeking a nuclear weapons-free world in the place where I am living.”

Besides the Declaration of Commitment, we also have a “Declaration of Solidarity”—especially for people who cannot come to Büchel but who want to show their full support (please see website sign-on).

In Germany, the peace movement always risks being considered “anti-American.” With plenty of signatures from the U.S. peace and justice movement, we can show that we are united in our vision for a nuclear-free world—and in solidarity with indigenous peoples and other people of color, who are disproportionately impacted by the nuclear production chain. We don’t want new nuclear weapons, and we believe the money should go to address people’s real needs!

All kinds of housing, including camping, exist in this beautiful volcanic region. There will be an office and a contact person nearby.