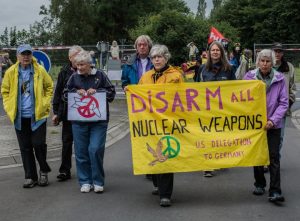 There were several major gatherings focused on nuclear weapons this summer. In Vienna in June there was the International Campaign to Abolish Nuclear Weapons (ICAN) Forum, the Vienna Conference on the effects of nuclear weapons, and the First Meeting of Parties to the Treaty on the Prohibition of Nuclear Weapons (TPNW); and in August was the Review Conference of the Nonproliferation Treaty at the UN in New York City. I was lucky and fascinated to observe all of them.

The formal UN sessions in Vienna and New York reminded the world that the nine nuclear-armed governments are out of step with the overwhelming majority of governments that want nuclear weapons abolished, and that the nine don’t intend to give up their arsenals. The five nuclear powers that have ratified the Nonproliferation Treaty (NPT) have, for 50 years, ignored the treaty’s binding obligations, principally its Article VI promise to denuclearize. All of the nuclear powers boycotted the Vienna meetings and urged their allies to stay away, betraying their fear of the TPNW’s power to stigmatize and delegitimize the Bomb.

Diplomatic sparks flew just once in New York, when China pointed out August 2 that stationing US nuclear weapons at NATO air bases in Europe violated the NPT’s articles I and II against transferring nuclear weapons to other countries. Germany hastily replied in writing that its “nuclear sharing” was legal because it was instituted long before the NPT became law. I thought of the 19th Century slaver who may have said he could keep his people in chains because he had enslaved them before the Emancipation Proclamation.

At the NPT RevCon in New York, I was alarmed to hear nearly every member state speaker promote nuclear reactor production like they were hucksters at an industry expo. In contrast, Linda Gunter of Beyond Nuclear International, speaking in Vienna, explicitly pointed out that nuclear reactors in war zones like Ukraine are stationary time bombs constantly posing a risk of catastrophic radiation releases. Sadly, the spectacular success of the TPNW is tainted by the treaty’s embrace of “peaceful” reactor development.

The dilemma of opposing nuclear weapons while promoting nuclear reactors was accidentally revealed in New York by the representative of the Philippines. He said power reactor sales are an “equity” issue in which the Global South shouldn’t be denied the “benefits” of nuclear-powered electricity that the North enjoys. The speaker then immediately noted that the world can’t tell whether or not Iran’s reactor fuel program is weapons related.

Because power reactors are simultaneously dirty targets in wartime, and H-bomb proliferation machines all the time, nuclear power and weapons proliferation are two lethal sides of the same poison coin.