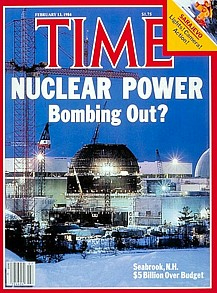 Ever wonder if the nuclear reactor near you has an evacuation plan that would work in an emergency? Have you ever been stuck in barely moving traffic on an interstate highway even when there was no crisis, no sirens, and no panic?

People driving Interstate-95 near the Seabrook reactor in New Hampshire have, and they have reason to worry, especially after the nonprofit group We the People and its founder Stephen Comley produced “No Evacuation Possible,” a public service video of routine summertime traffic jams on I-95 — Seabrook’s disaster escape route, and warning of the impossibility of an evacuation in the event of an accident at Seabrook.

One wonders how many other nuclear reactors have a single evacuation route that is frequently, even routinely, rendered nonfunctional. Commercial reactors are required by law to have a workable escape plan.

In January 2018, the town of Merrimac, Mass. joined half a dozen other communities calling on the US Nuclear Regulatory Commission to hold a hearing on whether Seabrook’s evacuation plan can be effectively implemented.

Reactor owner NextEra Energy Resources issued a Jan. 20, 2018 response/nonresponse in which it failed to address evacuation issues: “We have extensive emergency response systems in place,” the firm said, “including numerous back-up safety systems that provide our plants with layer upon layer of both automated and manual protection….”

Right. And—as with other catastrophic commercial nuclear power accidents, what if those back-ups fail and emergency evacuation is required?

NextEra’s dismissive position has helped We the People’s public warnings gain traction. Major state politicians and municipalities that are within what Massachusetts Attorney General Maura Healey has called — in a Feb. 26, 2019 letter to the Nuclear Regulatory Commission — “the 50-mile Ingestion Exposure Pathway Emergency Planning Zone” have begun raising their own alarms.

Massachusetts State Senate Minority Leader Bruce Tarr and State Representative Brad Hill wrote to State Attorney General Maura Healey October 10, 2018, complaining of “constituent inquiries” about Seabrook’s evacuation plan. The lawmakers reported that the public “has become increasingly concerned about effectively evacuating the area in the event [of] a nuclear emergency,” and noted that “drone-recorded video of the Hampton Beach during the summer tourist season … shows the heavy traffic congestion on the seacoast.”

We the People has also won resolutions from half a dozen local towns and city councils in Massachusetts and New Hampshire calling on state and federal agencies to convene a public hearing where emergency first responders could try and explain the Seabrook emergency evacuation plan.

Last September 25, New Hampshire State Representative Peter Schmidt wrote to AG Healey about the “urgency” of having first responders “testify as to the plans and possibilities for safely, effectively and expeditiously evacuating the seacoast in the event of a nuclear emergency.” Several municipalities within the evacuation zone have “strongly endorsed We the People’s call for this first responder hearing,” Schmidt wrote.

Representative Schmidt’s letter raised two additional issues that We The People has brought to light. What Schmidt called “some sort of gag order” has allegedly been imposed on Massachusetts State Police officers and the New Hampshire National Guard members, forbidding them from speaking about evacuation issues.

Mr. Comley personally made a formal, recorded presentation regarding the question of the alleged gag order to the Massachusetts State Police on September 2, 2016. Then, according to a February 14, 2018 letter by Christina Lucin of the State Patrol’s Fraud Identification Unit, the record of the proceedings were “lost.” Consequently, Representative Schmidt complained to AG Healey: “[T]he disappearance of the record is very troubling.”

Seabrook is 13 miles south of Portsmouth, New Hampshire, and 40 miles north of Boston, large cities within the “ingestion exposure” zone. In March 2011, the US Nuclear Regulatory Commission (NRC) recommended the evacuation of all US residents from within 50 miles of the three Fukushima reactor meltdowns in Japan.

The Seabrook reactor is set between the towns of Seabrook and Hampton Falls, New Hampshire, a mere 1.2 miles east of Interstate 95. Hampton Beach and its popular state park are only 1.6 miles to the east.

So far, AG Healey has still not agreed to schedule a public hearing for first responders to speak about their concerns over the plausibility of emergency evacuation. We the People and seven local municipalities in the Emergency Planning Zone are still waiting to hear from the Attorney General’s office.

There are 98 commercial nuclear power reactors in the US. How many would effectively become weapons of mass destruction if an accident or a terrorist bomb made emergency evacuation both necessary and impossible?