Fracking wastewater may be more radioactive than researchers previously believed.

A new study shows that “commonly used testing methods may underestimate the total radioactivity of wastewater produced by gas wells that use hydraulic fracturing, or fracking, to tap the Marcellus Shale,” according to a report in Science, a publication of the American Association for the Advancement of Science. 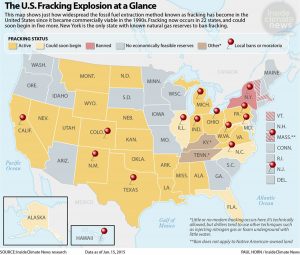 The study says that predicting radioactivity of fracking wastewater requires “an understanding of the geochemistry, decay properties, and ‘in-growth kinetics’ of radium and its decay product radionuclides.”

The study called for policy changes. “The findings suggest government agencies should consider retooling some testing recommendations and take a fresh look at possible worker exposure to potentially harmful waste, the authors say. But some outside researchers are skeptical that the laboratory study reflects real-world conditions,” Science reported.

Environmentalists have long been drawing attention to the danger of radioactive oil-and-gas wastewater. Abigail Dillen, the Vice President of Litigation at the environmental law firm Earthjustice, called it a “slow burn” sort of problem.

“It’s just cloudy-looking water, hundreds of billions of gallons of which are disposed every year. Though it usually contains chemicals, heavy metals, and radioactive material, it doesn’t look like much. It’s usually stored in dormant pits or injected underground. So unless something drastic happens, pollution usually accumulates, slowly seeping into soil and groundwater, instead of happening all at once,” the website ThinkProgress reported.

—Sara Jerome is a WaterOnline contributing writer and has covered business, technology, and regulation for the Financial Times Group, National Journal, and The Hill.