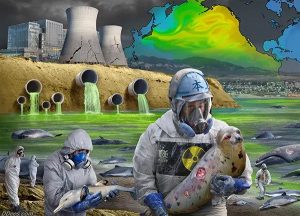 The new Chairman of Tepco Holding, Inc., Takashi Kawamura, caused a public uproar in the coastal fish­ing community last April when he reportedly declared that almost 1 million tons of contaminated waste water stored in tanks onshore would be dumped into the ocean.

“The decision has already been made,” Takashi Kawamura, said in a recent interview with the foreign media, Japan Times. Newsweek also reported July 14 that, Kawamura told the media that “nearly 777,000 tons of wa­ter tainted with tritium …will be dumped into the Pacific Ocean.”

But the company faced an im­mediate backlash, especially among fishers whose livelihoods have been devastated since the March 11, 2011 catastrophe, and quickly reversed itself. The company now says it has “no plans for an immediate release” and can keep storing water through 2020 or 2023.

British newspapers reported Nov. 27, that “there are 900 tanks that could spill if there is another earthquake or tsunami.”The New York Times said last March there were “1,000 gray, blue and white tanks on the grounds… [that] already hold 962,000 tons of contaminated water, and Tokyo Electric is installing more tanks.”

In May 2015, the International Atomic Energy Agency urged Japan to dump the waste water in the ocean, and in Sept. 2016, Dale Klein, a former chair of the US Nuclear Regula­tory Commission, recommended ocean dumping too, telling Bloomberg News that ocean dumping “will not be a safety issue, but it will be an emo­tional issue.” Klein added, “I get nervous about just storing all that water when you have about a thou­sand tanks. You have all the piping, all the valves, everything that can break.”

Scientists have declared the three-reactor disaster the worst radioactive contamination of the ocean in recorded history.

About 300 tons of ground water rushes into three reac­tor basements through earthquake-destroyed foundations, mixes with the melted uranium fuel rods and becomes tainted with radiation. The waste water is then pumped out and filtered through an experimental process called Advanced Liquid Processing System. ALPS separates most of the dangerous isotopes but can’t remove tritium, the radioactive form of hy­drogen. It is this “tritiated” water that is stored in the large tanks.

Japan’s government and Tepco argue that since nuclear reactors routinely release tritium to the air and water, the ocean dumping of 1 million tons of tritiated water to the sea would not be harmful.

Tritium concentrates in aquatic organisms including algae, seaweed, crustaceans and fish. With a radioactive half-life of 12.3 years (half its radioactivity will decay in 12.3 years) it persists in the environment for 120 years.

Christina Mills, a staff scientist with the Institute for Energy and Environmental Research (IEER) notes, that “tritium can cross the placenta, become incor­porated into the embryo/fetus, and irradiate rapidly dividing cells, thereby raising the risk of malforma­tions and early failed pregnancies. Given that all of a woman’s ova get made while she is still in her mother’s womb, the risks can be multi-generational.”

IEER President Dr. Arjun Makhijani, reports that “Tritium is a highly radioactive isotope of hydro­gen…. Since tritium has the same chemical proper­ties as hydrogen, it can combine with oxygen to form water. Such tritiated water is radioactive, and has become one of the problem pollutants at many nuclear facilities. In some places it has contaminated groundwater and surface water and continues to do so. … Commercial nuclear power plants also dis­charge tritium into public water bodies.

“Since tritiated water is processed by plants, animals and humans like ordinary water, the tritium in it can become transformed into other chemicals, such as proteins needed by the body. It can become part of the DNA. It can affect developing fetuses.”

Makhijani reminds readers further that “The estab­lished science is, and has been for some time, that there is no threshold for cancer risk of radiation and therefore no level of exposure is ‘safe.’ While it is true that we all are exposed to natural background radiation, this does not mean that natural back­ground radiation is ‘safe.’”

Dozens of Navy personnel who were aboard the aircraft carriers USS Ronald Reagan and USS Essex when they went to Fukushima in March 2011 to render aid to survivors, have since suffered unusual health problems including fatigue, weight loss, swollen limbs, joint pain, stomach ailments and diminished eyesight.

Stonewalled by the Navy, 420 sailors have joined a $1 billion class action lawsuit in federal court in San Diego against Fukushima’s owners, Tokyo Electric Power Co. (Tepco), and against General Electric which built the three destroyed reactors. Tepco and the Navy contend the sailors did not receive enough radiation exposure to have caused the illnesses. How­ever, Japan, South Korea, and Guam later declared the USS Reagan too radioactive to enter their ports.

The court case is moving slowly—it was filed in 2012. According to Courthouse News, eight of the sailor-plaintiffs have already died—most from can­cer—since the first case was filed. The sailors are represented by some high-profile attorneys, includ­ing, among others, former US Sen. John Edwards and his daughter Cate Edwards.

Cate Edwards told Courthouse News there are 23 plaintiffs living with cancer, many of whom served in Fukushima in their early 20s and some as young as 18. Beyond the group suffering cancer, many of the sailors have degenerative diseases, some have lost mobility, use of their arms and legs, some have back problems and eyesight loss.

A 26-month-old toddler born to a sailor-father who served in Fukushima died from brain and spine cancer. One female sailor opted to end a pregnancy after finding out the fetus had severe birth defects, Edwards reported. Another sailor, who was pregnant during the mission and her “Baby A.G.,” who was born in October 2011 with multiple genetic muta­tions, are also plaintiffs.

“Why are all these young, healthy, fit people getting cancer? Experiencing thyroid issues? It’s too strange to be a coincidence,” Edwards told Courthouse News. “That just doesn’t happen absent some exter­nal cause. All of these people experienced the same thing and were exposed to radiation at Fukushima. A lot of this is just common sense.”

No trial date has been set, but attorneys will argue a government “motion to dismiss” at a hearing Jan. 4. —Bianca Bruno, Courthouse News online, Nov. 29, 2017; Harvey Wasserman, EcoWatch/Nuclear, Feb. 26, 2014

For over 10 years, the Japanese manufacturing giant Kobe Steel falsified test data on certain substandard products to avoid the cost of massive do-overs. The scandal, in which the company faked data on the quality of aluminum, copper, wire and steel to cover-up unmet engineering standards, like strength. The fraud has impacted at least 500 industrial customers around the world where exacting safety requirements are vital, including builders of cars, bullet trains, aircraft and nuclear reactors. The country’s nearly collapsed nuclear power industry was also hit by the fraud. The Fukushima-Daini, on Japan’s northeast coast near the destroyed Fuku­shima-Daiichi complex, purchased some of Kobe Steel’s falsely certified copper piping. Tokyo Elec­tric Power Co. claims that the substandard piping was never installed but was in storage.—New York Times, Oct. 14, Oct. 20, and Nov. 11, 2017

Six and a half years since the three-reactor disaster began, Tepco just began installing equipment to be used for removing waste fuel rods from the heavily damaged storage pool for reactor 3. The equipment, weighing 72 tons, was lifted by two large cranes.

The storage pool, located in the reactor building on a floor 36 meters [ten stories] above ground level, holds 566 used and unused uranium fuel assem­blies. Tepco plans to begin removing the fuel from the pool by the middle of next year. —The Japan Times, Nov. 12, 2017

The Great Northeast Japan Earthquake and tsunami in 2011 caused a total loss of cooling at Fukushima-Daiichi. Over-heating of the fuel went out-of-control at three reactors and melted uranium fuel burned hot enough to torch through steel containment structures “and even penetrate the concrete floors below,” Martin Fackler reported. Engineers laboring to find it repeatedly failed in attempts to photograph the wreckage with radiation-proof robots. This sum­mer, new models, redesigned after multiple failures, finally found the fuel in all three reactors. “I’ve been a robotic engineer for 30 years, and we’ve never faced anything as hard as this,” said Shinji Kawat­suma, a director at the Naraha Remote Technology Development Center. “Until now, we didn’t know exactly where the fuel was, or what it looked like,” said Takahiro Kimoto, a general manager for Tepco. Tepco executives said early on that no manual any­where explained how to confront three simultaneous meltdowns. —New York Times, Nov. 19, 2017