Japan has made significant strides toward renewable alternatives and away from long-term reliance on nuclear power since the 2011 earthquake and tsunami destroyed the four reactors at Fukushima Daiichi, according to recent reports. Before the disaster, less than 3% of Japan’s electricity came from (non-hydro) renewable sources, with about 30% provided by the country’s 54 nuclear reactors. In one year alone, between June 2012 and June 2013, Japan added 3.6 gigawatts of renewable energy capacity — an amount coincidentally equal to the average output of four nuclear reactors. All 54 of Japan’s reactors have been either incapacitated or shut down for safety retrofits since the Fukushima disaster began. 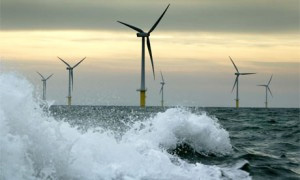 Japan’s renewable energy success has been driven by the feed-in tariff (FIT) program the federal government launched in July 2012. Similar to the program that has supported Germany’s renewable energy boom, Japan’s FIT requires local utilities to purchase all of the power generated from solar installations over 10 kilowatts for at least 20 years. The program has revitalized Japan’s solar industry, which had been stagnant since 2004 when Japan became the first country to reach 1 gigawatt in solar capacity. In August, the country became just the fifth nation in the world to exceed 10 gigawatts of installed photovoltaic solar capacity, and its leaders are looking to add over 5 gigawatts of solar capacity next year alone.

On Nov. 1, Japan celebrated the opening of its largest solar photovoltaic power plant to date, the Kagoshima Nanatsujima Mega Solar Power Plant near Kagoshima Bay in southern Japan. At 70 megawatts, the Kagoshima solar plant covers an area equal to that of 27 baseball stadiums and is expected to power about 22,000 households.

In Fukushima Prefecture, just 12 miles from the shore where the Fukushima Daiichi reactor complex continues to release radioactive water to the Pacific ocean at an alarming rate, Japan’s first floating offshore wind turbine was completed on Nov. 11. The 2,000 kilowatt wind generator will power about 1,700 homes and is the first in a series of three trial projects planned by the Economy, Trade and Industry Ministry, the University of Tokyo, and 10 major private industry partners. Japan’s total wind energy potential is estimated at a staggering 1,570 gigawatts — five times the country’s current energy output — but steep elevation changes and deep waters off of most of the island nation’s coastline have posed significant logistical challenges to turbine installation. The Fukushima turbine is built on a floating platform that is anchored to the sea bed by massive steel chains. If successful, the initiative could lead to the building of over 140 floating turbines by 2020, with a total capacity of over 1 gigawatt. With almost 100% of the materials for the new offshore turbine technology produced in Japan, the project has great job-creation potential and would be applicable to deep-water offshore locations all over the world.

Despite the wind and solar capacity progress, Japan’s utilities are still lobbying for the government to restart 14 nuclear reactors, complaining that they cannot afford to provide electricity without them. However, a November report showed that for the period from April through September, five of nine Japanese utilities with nuclear reactors posted a net profit.

Tokyo Electric Power Company (Tepco), which operates the Fukushima Daiichi facility, was the biggest gainer, with a $6.19 billion net profit. Tepco attributed its positive numbers to a recent rate hike, postponed maintenance on its thermal power plants, and a government subsidy of $666 billion. But Hokuriku Electric, which has held the most sustainable profits of the five utilities, is also the least dependent on nuclear power. As Greenpeace-Japan spokesperson Akiko Sekine told Reuters, in one of two reports it published Nov. 12, “They have said they wouldn’t be able to get by without restarting reactors, but it seems they can.”

Japan’s remaining reactors out of the nation’s energy portfolio over the next 20 years. Koizumi, who was one of Japan’s most popular leaders when he stepped down in 2006, was in favor of nuclear power while in office but has reversed his position. He believes Abe has the political power to abolish nuclear power in Japan. And, according to a recent poll, 60% of the Japanese public agrees with his “zero nukes” plan.

Another former prime minister who has spoken out against nuclear, Morihiro Hosokawa, recently told the Tokyo Shimbun why he supported Koizumi’s position.

“I can’t understand why they want restarts of the nuclear plants when there is no place to discard the nuclear waste,” he said. “It is a crime against future generations for our generation to restart nuclear [reactors] without resolving this issue.”

Given the combined forces of the Fukushima disaster, political pressure, popular opinion, and nearly boundless renewable energy potential, Abe has confirmed that it is only a matter of time before Japan abandons nuclear power forever. Whether the move will take two years or two decades, and how much more damage will be done in the meantime, remains to be seen.