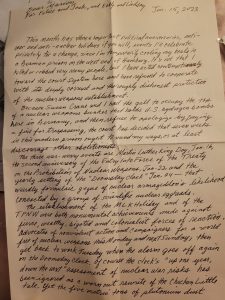 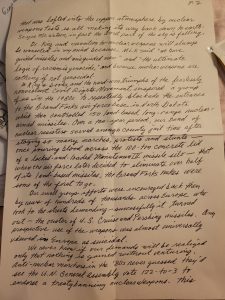 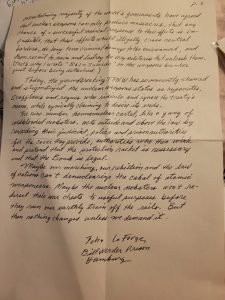 This month has three important political anniversaries, anti-war and anti-nuclear holidays if you will, events I’ll celebrate privately for a change, since I’m temporarily cooling my heels in a German prison on the west end of Hamburg. It’s not that I killed or robbed very many people, but I have acted contemptuously toward the court system here and have refused to cooperate with its deeply corrupt and thoroughly dishonest protection of the nuclear weapons establishment.

Because Susan Crane and I had the gall to occupy the top of a nuclear weapons bunker that holds U.S. hydrogen bombs here in Germany, and then refuse to apologize by paying a fine for trespassing, the court has decided that seven weeks in this modern prison ought to mend my ways, or at least discourage other abolitionists.

The three war-weary events are Martin Luther King Day, January 16; the second anniversary of the Entry into Force of the Treaty on the Prohibition of Nuclear Weapons, January 22; and the yearly setting of the “Doomsday Clock,” January 24 – that weirdly formulaic gauge of nuclear armageddon’s likelihood concocted by a group of scientific nuclear eggheads.

The establishment of the MLK holiday and of the TPNW were both monumental achievements made against fierce, wealthy, bigoted and colonialist forces of reaction. Advocates of nonviolent action and campaigners for a world free of nuclear weapons this Monday and next Sunday, then get back to work Tuesday when the alarm goes off again on the Doomsday Clock. Of course the clock’s “up one year, down the next” assessment of nuclear war risks has been ignored as a worn out rewrite of the Chicken Little tale. Yet the five metric tons of plutonium dust that was lofted into the upper atmosphere by nuclear weapons tests is all making its way back down to earth. So yes Mr. Watson, in fact the worst part of the sky is falling.

Dr. King and opposition to nuclear weapons will always be connected in my mind because MLK said, “We have guided missiles and misguided men” and “the ultimate logic of racism is genocide,” and because nuclear weapons are nothing if not genocidal.

Dr. King’s books, and the hard-won triumphs of the fearlessly nonviolent Civil Rights Movement, inspired a group of us in the 1980s to repeatedly blockade the entrance to the Grand Forks air force base in North Dakota which then controlled 150 land-based, long-range nuclear-armed missiles. Over a ten-year period, our band of nuclear resisters served enough county jail time after staging so many marches, protests and stunts – once pouring blood across the 100-ton concrete lid of a locked-and-loaded Minuteman III missile silo – that when the air force later decided to eliminate over half of its land-based missiles, the Grand Forks nukes were some of the first to go.

Our small group efforts were encouraged back then by news of hundreds of thousands across Europe who took to the streets demanding – successfully it turned out – the ouster of U.S. Cruise and Pershing missiles. Any prospective use of the weapons was almost universally viewed in Europe as suicidal.

We never know if our demands will be realized — only that nothing is gained without venturing. Anti-nuclear marchers in the ‘80s never guessed they’d see the U.N. General Assembly vote 122-to-3 to endorse a treaty banning nuclear weapons. This overwhelming majority of the world’s governments have agreed that nuclear weapons can only produce massacres, that any chance of a successful medical response to their effects is impossible, that these effects would illegally cross neutral borders, do long-term criminal damage to the environment, and then recoil to maim and destroy the very militaries that unleash them. (That’s why I wrote “B61 = Suicide” on the weapons bunker just before being detained.)

Today, the groundbreaking TPNW has permanently shamed and stigmatized the nuclear weapons states as hypocrites, scofflaws and rogues who ridicule and ignore the treaty’s means, while cynically claiming to desire its ends.

The nine-member thermonuclear cartel, like a gang of coldblooded mobsters, acts outside and above the law by rewarding their judicial, police and prison authorities for the cover they provide, authorities who then wink and pretend that the protection racket is necessary and that the Bomb is legal.

Maybe our marching, our rebellion and the law of nations can’t denuclearize the cabal of atomic weaponeers. Maybe the nuclear mobsters won’t re-direct their war chests to useful purposes before they run our earthly train off the rails. But then nothing changes unless we demand it.