The Kings Bay Plowshares 7 got inside the world’s largest nuclear submarine base—Naval Station Kings Bay, in Georgia—and poured blood, painted messages, hung banners, and damaged several objects there including nuclear weapons sculptures that the seven condemned as “false idols.” The reference is to the Old Testament declaration that “those who worship inanimate idols will be like them, unseeing, unfeeling, unable to hear the truth.” The seven chose April 4, 2018, for their radical action, the 50th anniversary of the assassination of Dr. Martin Luther King, Jr.

In October 2019, the seven were convicted in federal court of felony sabotage and damage to property. 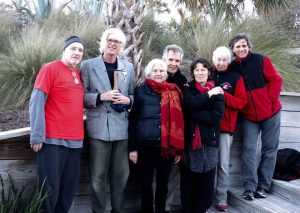 In June, defendant Elizabeth McAlister, 81, of New London, Connecticut, and a founder of both Jonah House in Baltimore and the Plowshares Movement, was sentenced by US District Judge Lisa Godbey Wood to time served after spending more than 17 months in jail awaiting trial. Liz was also sentenced to three years of probation, and ordered to pay $33,501 restitution to be shared jointly with the six other defendants.

On November 12, via video conference, Carmen Trotta, 58, of the New York City Catholic Worker was sentenced to 14 months in prison, and Clare Grady, 62, was sentenced to one year and one day in prison. The additional day means Clare will be eligible for time off for good behavior while in prison. Carmen and Clare were also ordered to serve three years of probation, and to “jointly and singly” pay restitution of $33,501.

Fr. Steve Kelly, 71, a Catholic priest from California, has been incarcerated in Georgia jails ever since the action (32 months) for refusing to accept the conditions demanded for pre-trial release. Steve was sentenced October 15 by the same judge who gave him 33 months in prison, three years probation, and restitution. With the time he’s already served, and with credit for “good time,” Steve would normally be released. However, he faces additional prison for an alleged probation violation stemming from protests at the Bangor Trident sub base in Washington State. He will likely be transferred from Georgia to Washington State to face the judge there.

On October 16, Patrick O’Neill, 64, a Catholic Worker from Garner, North Carolina, was sentenced to 14 months in prison, restitution, and three years of probation. Independently of the others, Patrick, the father of six children, has appealed the sentence.

Sentencing for the 7th defendant, Mark Colville, 59, a Catholic Worker from New Haven, Connecticut, is scheduled for December 18. Mark has refused to travel to Georgia because of the coronavirus and has insisted on his constitutional right to be sentenced in person before the court.

All seven defendants delivered personal sentencing statements to the court, and we share that of Fr. Steve Kelly, below.

—For complete coverage of the action, trial, and sentencing hearings see: kingsbayplowshares7.org; and/or nukeresister.org. Both contributed to this update.