Between 1957 and 1962 at least 1,458 barrels of toxic and radioactively contaminated military waste, from Honeywell’s Twin Cities Army Ammunition Plant in Arden Hills, Minnesota, was secretly dumped by the Army Corps of Engineers into Lake Superior along Minnesota’s North Shore. Almost all the barrels are still in the water. 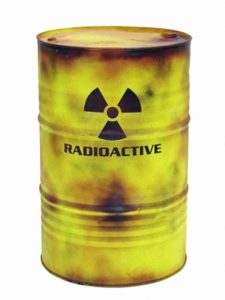 Nukewatch has long demanded the identification, recovery and proper disposal of the barrels that remain intact. (See our special report, “Drinking Water at Risk: Toxic Military Waste Haunts Lake Superior,” January 2013.) Our work has helped keep this scandal in the public eye and has earned some hard-won success.

It appears that Nukewatch’s insistence has resulted in an important expansion of the ongoing investigation being conducted by the Red Cliff Band of Lake Superior Chippewa. The Band’s Lake Superior barrels study has been funded by major grants from a Pentagon program for remediation of Formerly Used Defense Sites.

The breakthrough regards the Knife Island/Knife River dump site 10 miles north of Duluth, Minnesota (one of at least seven barrel dumping areas) and was revealed last November in a public presentation by Frank Koehn, a spokesperson for the Band. Since 2012, the Band has reported that only a “debris field” and no identifiable barrels could be seen in its underwater sonar pictures of the Knife Island site.

But in four detailed letters, Nukewatch provided the Band with official documentation of over 700 barrels having been dumped at Knife Island. In particular, Nukewatch provided the Band’s study committee with copies of the Army Corps’ own records including tug boat logs indicating the exact dates, times, numbers, and even weights of the barrels discarded at Knife Island/River.

The Band didn’t respond to the letters, seemed unmoved, and its committee staff said that the ongoing recovery plan would not pursue anything at the Knife River site. One staff member suggested to Nukewatch, “The tug boat logs may not be reliable.”

Then, late last year, Red Cliff reversed its position. The Band will now seek funds to redo its lake bottom sonar survey of the Knife Island/Knife River site. Koehn said in his presentation, “The bulk of this stuff was put off Knife Island,” and the Band’s new informational materials now state, as Nukewatch and others reported earlier, that 706 of the 1,458 barrels were dumped there.

When asked by Nukewatch if the acknowledgement of the need to more thoroughly study Knife River was a reversal of the Band’s earlier position, Koehn admitted it was. The Band now believes that its sonar scan was “done too fast, about nine square miles per day, and that it will return to the area and scan at two square miles per day,” if funding can be secured, according to Koehn.